Imagine the pressure of having to redesign a legend. Paying homage to a vehicle with icon status, while still keeping your younger customers interested.

Following in the footsteps of the original Defender was never going to be an easy task. But Land Rover didn’t just want to build another SUV. It needed to be revolutionary, trend setting and above all else, a car worthy of its namesake.

And boy oh boy we can only imagine the sleepless nights the engineers had researching, developing and testing even the smallest details of what would become probably become one of the most highly anticipated SUV’s to launch in recent years.

The end product, a gadget showcase, comfortable, uber mile muncher capable of taking on almost any trail or road surface you can throw at it with ease.

We often hear complaints about technology taking over vehicles, how the car can “drive itself”. The only car that can drive itself, is a Tesla or a taxi. All of the technology in the Defender is not there to take away from the driving experience, it’s there to enhance it. Terrain Response 2 isn’t there to subtract from the challenge of taking on a technical ascent, it’s there to stop you from damaging your vehicle. The less speed you need to carry to overcome an obstacle, the less the chances of breaking a control arm.

We were given the choice of two Defenders to test. A beautiful gloss Gondwana Stone 2.0L D240 diesel or a stealthy satin Pangea Green 3.0L P400 petrol mild hybrid electric vehicle (MHEV), the latter fitted with the Explorer Pack which adds a roof rack, side box and a sleek snorkel. Much deliberation later, a choice was made to take the D240 as this is most likely the engine most customers will select. In case you didn’t know, D240 refers to the engine type and performance spec. So D is for diesel and 240 designates the horsepower. Same applies for the P400, petrol and 400 horsepower. If all goes well, we will be getting the P400 in for testing for good measure. 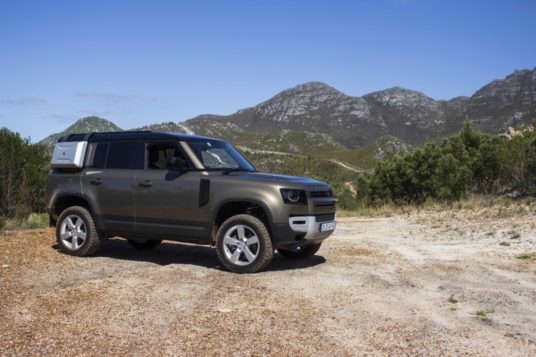 The interior is another area where Land Rover had their work cut out for them. It would have to be able to withstand proper abuse from mud, sand, snow and kids, but also luxurious and feature rich, something Land Rover’s of late are known for. The cabin is a wonderful combination of tough yet supple rubber, leather and robust woven textiles. Land Rover claims a tested wear life of 30 years. Only time will tell if that is true, but if there is any semi-luxurious interior that is within a shout of doing that, it’s most likely the Defender’s. Stepping into the vehicle you immediately notice the two digital displays, while at the same time admiring how it just seems to flow with the dashboard.

Most of the buttons have been moved to the screen, but unlike some other manufacturers, the important controls are duplicated with physical buttons. Underneath the centre screen, you’ll find the climate control and off-road function selectors, your most used controls other than the radio.

In front of the driver is a massive, high resolution display capable of mimicking a traditional two gauge instrument cluster, or a full size GPS that can display trails if they have been mapped. 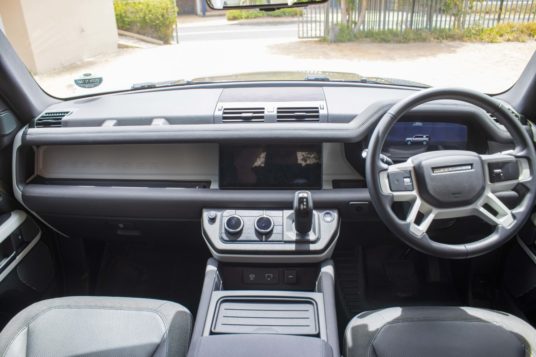 The GPS display can also be swapped for fuel economy, 4×4 information or driver aids. It’s also possible to merge the old and new, by having the above mentioned options positioned in between the two gauges, or one gauge, with an information display on either side.

The centre display comes with a smartphone style app menu containing amongst others more 4×4 information (roll meter and inclinometer), trailer related info, Android Auto and Apple CarPlay, Terrain Response modes and the list goes on. The Defender has more cameras than the first moon landing shuttle, capable of full 360º view, front wheels view and the best one, even camera that shows what’s underneath the vehicle. The antenna has a camera built in that sends its image to the rear view mirror. Sounds like a gimmick, until you have passengers sitting in the rear, or the boot is filled up. 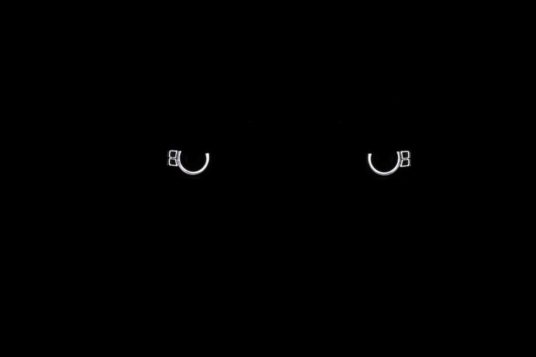 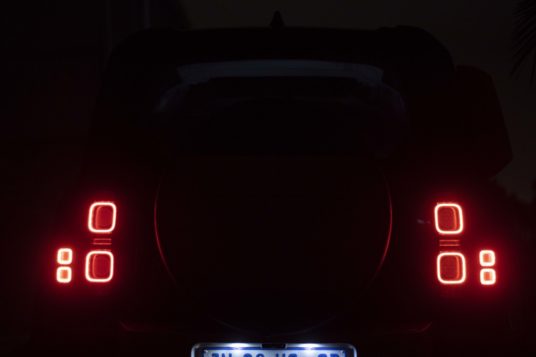 The reminders of the old Defender integrated with modern techonology.

One of the many options you can select when specifying your Defender, is a built-in air compressor. With it being built-in, you’ll never forget it, which happens to everyone at least once. Combine this with the optional off-road tyres and you’ll be ready for any situation.

The exterior though is where the engineers really had to get it right. Many people judge a book by its cover, so get the styling wrong and you are starting off on a bad foot. The references to the old Defender don’t stand out at first, but once you notice them it all seems to make sense. A beautiful mix of rugged and sleek, while incorporating modern technologies like LED light.

There’s no beating around the bush, the new Defender is a very capable vehicle. A powerful engine, competent 4×4 system and proper off-road tires is the base recipe for any serious 4×4. Throw in the air suspension with up to 20cm of lift and not only will it be able to conquer almost any obstacle, but also in amazing comfort. On tar roads the suspension irons out bumps and dips, while controlling body roll immensely well. Offroad, the suspension has generous amounts of articulation allowing the wheels to stay on the ground to maintain traction, an historic achilles heel of air suspension. 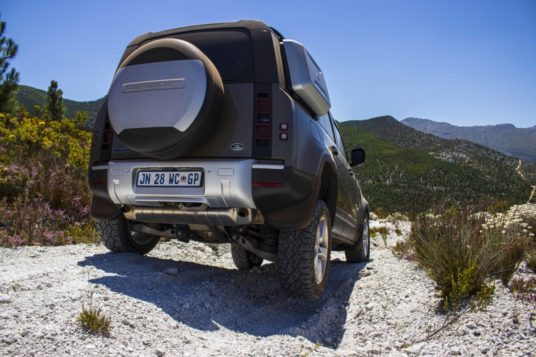 In our testing we mostly had it in Normal mode on the Terrain Response 2 system. At no point did we feel it was necessary to change the settings on Grabouw 4×4 trail, but we did put it in each individual mode to see which parameters it affects, including steering weight, power response and amount of wheelspin allowed, amongst others.

Say what you want about technology in modern cars, but one thing is for sure, it does make the driving experience easier, allowing you to take in more of the scenery and creating more memories with your loved ones.

Land Rover has managed to program the Traction Control to not be too intrusive, but always there when you need it. The Defender is sure-footed on the trails (at least in our testing), but the off-road tires is a non-negotiable recommendation from us. If you plan on using the Defender in technical conditions, these will make your life a lot easier.

Add to that approach, breakover and departure angles of 38º, 28º and 40º respectively and unless you are trying to drive up a vertical surface, the Defender should feel right at home on a Grade 4 and higher trail.

Overall, the Defender didn’t even break a sweat. Granted, it was a very limited test scenario, but we also don’t want to give everything away, as we will be getting the P400 in for another round of testing. As tested, this First Edition retails for R1 355 603, with quite a few optional extras fitted. Without options, it’s R1 281 000 and it’s possible to get into a 110 Defender at R1 143 900. This seems expensive, but when compared with the equivalent Prado, it falls in the same price bracket, with a more luxurious interior, more tech and immense offroad capability.