The good ol’ folks at Toyota love to take their time to release new models, but it’s for good reason. See, they spend thousands of hours researching, developing and testing new variants of models to make sure it lives up to the Toyota name. And to live up to that name, is a tall order.

The current generation Prado (J150) has been around since 2009 and has since seen a couple of facelifts, but no major engine upgrades. You could buy your Prado with either the wonderful 1GR-FE 4.0L V6 petrol (207kW – 381N-m) or the 1KZ-TE 3.0L diesel (129kW – 450N-m). The first being the first choice for most buyers, especially if they are planning to tow bigger trailers and caravans. The V6 is thirsty, but also from personal experience, reliable and bucket loads of power when you need it.

The diesel however was in the eyes of some, the Achilles heel of the Prado. Also very reliable, but lacking in the output department. This became quite apparent when towing. 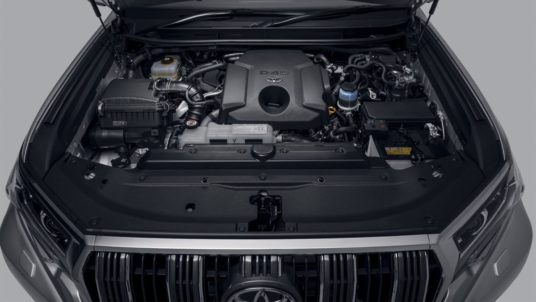 Here we are, 11 years later and Toyota gave us what we were waiting for, their 2.8 GD6 diesel in the Prado.

The 1GB-FTV was first released with the current generation Hilux and Fortuner which at the time produced 130kW and 450N-m. With recent updates to both models, power was increased to 150kW and 500nM for the automatic versions, with the torque figures staying at 450N-m for manual versions. In the Prado 2.8, it is blessed with the 500N-m figure, combined with a 6 speed automatic.

A power jump of 20kW and 50N-m does not go unnoticed. It is very easy to take the vehicle onto a trail, rave about the difference in power and there’s your review. But we wanted to test what the real-world effects of those increases are. With a plan in mind, we took the dusty covers off our Conqueror trailer fully loaded up with all our camping equipment and water tanks filled for good measure. Weighing in at near 1000k, it represents a typical offroad trailer load.

We picked Paarl Mountain’s access road as our testing grounds. Although not technical in any sense of the word, it is gravel, not in the best condition, steep climbs in sections and sharp loose descents. Perfect for testing the towing capabilities of the Prado without damaging the car or the trailer.

The low-down torque of the 2.8 gets you going easily on inclines, while the kilowatts keeps the momentum going on longer hills.

If you were to take the Prado onto a more challenging road, with or without the trailer, you will be in capable hands. Centre and rear diff lock control and a whole suite of off-road modes means your abilities as a driver will most likely be the determining factor on how far you get.
The VX-L grade has an impressive number of driver-assistance systems, including an effective Adaptive Cruise Control which keeps you a set distance from vehicles in front by braking and accelerating on its own. Off-road ability is ensured with Multi-Terrain Select (MTS) and its allied camera set, called Multi-Terrain Monitor, which allows one to select wheel-specific side and birds-eye views of the immediate surrounds, shown in detail on the navigation touchscreen. It’s not new tech, but it works very well on tight or rocky tracks. The MTS modes operate in low-range and offer five permutations for throttle sensitivity, gearbox shift points and traction control inputs. The latter, under the A-TRAC rubric (Active Traction Control) directs torque to the wheels with most traction, and it knows to brake wheels that are spinning. It’s clever enough, and works seamlessly in the background. An addition is Crawl Control, which allows you to set a crawl speed and avoid jabbing the throttle during rock-and-roll sections. 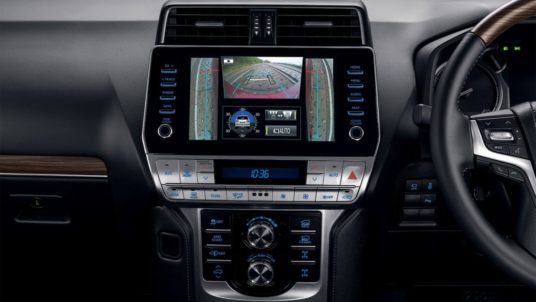 What helps expand the Prado’s command of various terrains, ranging from tarmac to graded trails, is the ability to change air-suspension settings. The coils up front on the double-wishbone suspension are complemented by air bellows on the multi-link solid rear axle, enabling you to adjust ride-height. Damping firmness can also be toggled between Eco, Comfort, Normal, Sport and Sport+.
Then there is Toyota’s KDSS (Kinetic Dynamic Suspension System), which works by hydraulically firming up pressure on the anti-roll bars front and rear, and goes a long way to control body roll at higher speeds, while still allowing plenty of articulation at lower speeds. The best of both worlds, if you like. This is accurately reflected on our RTI ramp figures – the Prado achieved an index of 473, somewhat above that of the Discovery 5’s score of 453. (The higher the figure, the greater the amount of axle articulation before losing traction while driving up our 20° ramp.)
What does all this tech mean? The Prado offers smooth and firm-enough progress on tar; and off-road, up to a particular point, it is very capable − given its bulk, deep front skirt and sidesteps. Dial up the right settings, and the car safely does it all without fuss, making quite difficult 4×4 sections a doddle even for a novice.

The 2.8 is rated up to 3000kg for braked trailers or caravans. Under normal driving circumstances, you barely notice the trailer especially if it is braked. But more impressively, even with light off-road duty the Prado does not break a sweat. We will definitely be getting the Prado back for a thorough trailer in technical conditions and off-road trail test.

It is great to see Toyota listening to its customers, giving the Prado the diesel engine it deserves. At R 1 193 000 it is on the pricier side in our market but you are buying not only a very capable all rounder, but Toyota’s legendary reliability and their great dealer network throughout Africa will be sure to keep you going if something had to go wrong.