The idea to end 2020 on a good note came to me in July of 2020. I knew a few of my friends would like to accompany me in anything I could think of. The first two friends that came to mind were Daniel from Robertson and the other was a college friend of mine that immigrated to Canada 3 years ago (Dirk).

I knew Dirk would like to visit South Africa, but we did not know if the border regulations because of Covid 19, would allow him to enter South Africa. None the less, I made a booking in the Namaqua National park for three nights at Koringkorrelbaai. I knew that if I booked something as remote as Namaqua National park Daniel and Dirk would be expecting an adventure. They had to be excited, given all the amazing images I Googled and sent to them to show what we were getting ourselves into. The camp sites of NP Park are all laid out in the most spectacular locations and are all right up against the coast line. Seeing that the camp sites are so close to the Atlantic Ocean, it can get windy. However, our time there was amazing and the weather could not have been better. 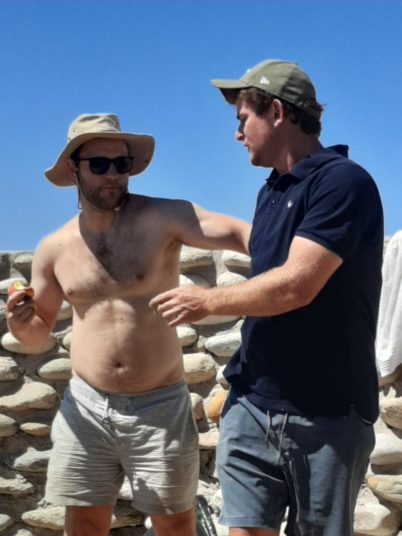 Day 1: 13 Dec 2020 (Prep Day)
Daniel arrived at my parent’s house in Clanwilliam. We had lots to pack because the camps sites at Namaqua National park only have toilets – the rest has to be taken along. For instance: water and ice to keep your drinks and meat cold.
I thought I had checked that nothing was forgotten, but obviously there would be one thing that I would forget. The single most important thing to take with was the gazebo that I lent from my parents. There are no shade or trees in that area of the west coast (like most of the west coast). All the camp sites at NNP Park have rock wall bomas, about 1.6m high with a braai area in the middle.

We made a list of items ranging from most important to least important. As seen below.
1. Gazebo
2. Braai grid
3. Braai tongs
4. Wood, Charcoal and fire lighters
5. Gin, beer and gin mix
6. Fishing gear
7. Tents
8. Ground sail
9. Foil
10. Casserole for the meat
11. Matches
12. Potjie
13. 75 litres if water. (Inexperienced campers should take more water.)
14. Food (first night was tjops and pot brood, second night was chicken and pot brood and third night was steak and baked potato in the fire.
15. Sunlight dishwasher and a few cleaning cloths.
16. Cutting board
17. Clothes and bedding
18. Tooth brush and soap

Our bakkie (a double cab) was packed very carefully because of all the stuff we had. Simple theory was followed – all the heavy things up against the back of the bakkie cab, the lighter things towards the back of the bakkie. Doing all the packing in Clanwilliam 40°C heat wasn’t pleasant but it made us do it quicker than usual.
The rest of the day we went fishing and had a braai with my parents to pass the time. 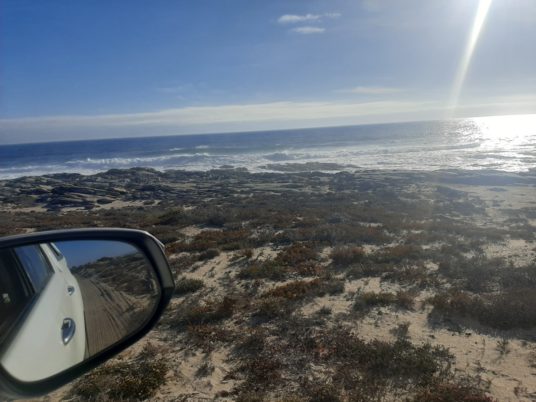 We left at 8 o’clock for Klawer, where we would have a Wimpy burger for breakfast and it was also our rendezvous point with Dirk who was coming from Vredendal and was driving with his girlfriend’s car (a Toyota Etios). This was the first time I had seen Dirk in 2 years.
We filled up with Diesel at the Engen in Klawer and made our way to Groenrivier Mouth in NN Park.
It was +/- 150km to the turn- off to Groenrivier ( 30km before Garies). From the N7 turn off to Groenrivier it’s +/- 80km gravel road. Dirk drove to Groenrivier and parked his car there and drove with us to Korringkorrelbaai. A 4×4 is essential when visiting NN Park.
The road from Groenrivier to all the camps along the coast is a very scenic and fun road to drive. The road snakes along the coast line and between the dunes, going from hard rock to very sandy areas. The veld in that area looks amazingly healthy and lush. It is typical succulent Karoo. The veld was full of different coloured vygies and other vegetation. When you stop and take a look between all the bushes, small purple flowers can be seen.
We saw one snake – a Cape Cobra on our way in and lots of different types of raptors. The presence of Cape cobras and raptors would be obvious to us after we noticed many Namaqua rock mice.
The drive from Groenrivier to Korringkorrelbaai was about 30km of sand driving. We stopped at our campsite after some beers on the road and stopping at the various lookout points for the spectacular scenery. Korringkorrelbaai is a large bay where the campsite is quite close to the sea. I don’t know how long it took to setup camp but it must have been a record. All three of us were suffering from “arrival aggression” which is an illness that all 20-30 year olds suffer from. After all the planning that was done to make sure we did not forget anything, I realized that I forgot a very important item – the gazebo frame poles! I was sad for about 3min and then we made a plan by stretching the gazebo canvas over the boma just so that we had some shade.
After camp was set up we went to explore the area. We are all three keen fishermen and wanted to look for fishing spots and just in general have a look around.
Dirk was so excited to explore that he threw his fishing pole in the back of the bakkie not thinking about the rough terrain and bushes that we would be passing. When we stopped, I saw that Daniel had drove too close to a big bush and Dirks fishing pole had broken in half. This was very funny for only two of us. The fishing pole was put to very good use in propping up the pole-less gazebo. 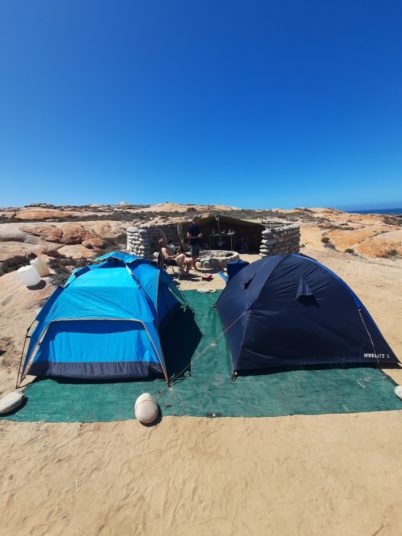 As night fell, the fire was lit and we started pouring cold gins using the little ice that we had. Ice was finished the next day, which meant that we did not have ice for the next few days. The scenery at night with a fire was even better than during the day. I made sure the braai went on for as long as possible for our entertainment. We took lots of wood.

Day started nice and early (06:00) as it always does when camping. Daniel looked like he had a very bad night’s sleep when he got out of the tent. Almost looked like he was going to cry at some stage of the day. I made coffee and we then discussed our schedule for the day. First thing on the list was to go fishing at Korringkorrelbaai. We had no luck at Korringkorrelbaai. We tried for about 2 hours and all we saw were dolphins very close to the beach. These are called Heaveside’s dolphins and I was surprised to see how small they were. They are apparently very rare to see.
We then had a large brunch to set us up for rest of the day’s activities. After brunch we set off to find a more promising fishing spots. We did as many 4×4 tracks as possible while looking for fishing spots. The tracks aren’t as challenging as I thought it would be but it’s still fun to do and interesting.

We came across one of the other campers that got stuck driving a 200 Land Cruiser with a caravan. The cruiser was totally stuck and would need our help to get out. The caravan was unhooked and the winch of the cruiser was attached to our Hilux. We were able help them out and they were on their way.
We drove and did the 4×4 tracks partly to see as much as possible of the park and the landscape. The area’s vegetation was looking very healthy and full of life (snakes, raptors and mice)
We needed ice and knew that there was an ice machine at the Groenrivier reception. When we arrived at Groenrivier, the receptionist said that the machine only makes one bag of ice a day. That was better than nothing and we bought the bag of ice for our gins at the braai later. We stopped off at 3 different areas to see if we could fish and dived around to see if there was crayfish for the next time when we come in crayfish season. We can definitely say that there are lots of crayfish!
After that we then went back to the camp site for one more spectacular braai of tjops and wors with a corn pot brood. The nights are the best because of the scenery and weird environment when night falls. 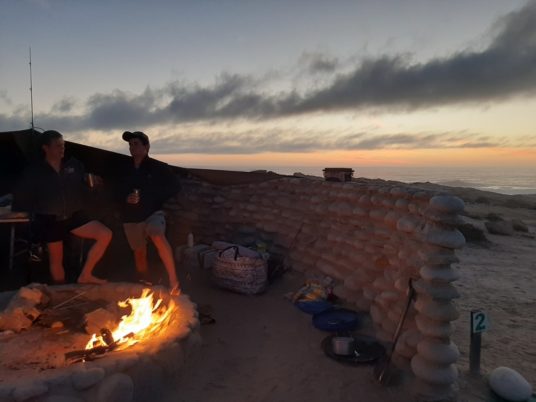 Dirk’s last day started early as usual. We drove Dirk the 27km back to Groenrivier where his car was parked. We loaded his car and said our goodbyes. On our way back to camp we drove past our neighbours that were next to us at Korringkorrelbaai. They were there in a single cab bakkie and there were four people in their party. We had a chat with them the night before and they said that they were driving to Somerset West, which is a good 450km from Groenrivier. They managed to fit 3 people in the front of the bakkie and one on the back. When we passed them on the way back to our camp, the poor guy on the back of the bakkie looked like he was racing in a boat on rough seas in the Trans Agulhas – holding on for dear life. We laughed all the way back to our camp.

Daniel and I then decided that we wanted to have lunch at Hondeklipbaai, at a restaurant in the harbour (The Shack). The meal was spectacular – both of us had a Weskus platter.
After lunch we drove back past the seal colony. This is a nice sighting but the stench is overpowering. So we did not stick around for too long and left to explore more 4×4 tracks.
The weather was amazing in our time we were there. The 4×4 tracks were enjoyed by all of us because of the beautiful environment that you drive through on all of the 4×4 tracks.
We got back to the camp and we started cleaning everything that was dirty. And slowly but surely started packing the bakkie. We had one more braai and some last bit of fire wood left which we burnt out because we did not want to take anything back that was not necessary.

Our time at Namaqua National park was very well spent and we will definitely go back to try and have the same amazing experience we had the first time. 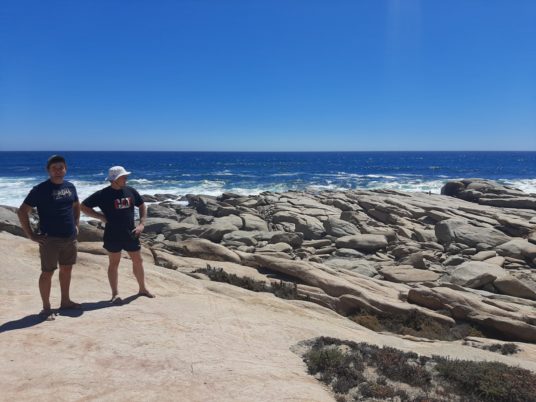