At some point, almost every South African with a car will make the trip from Joburg to Cape Town, and, in general, it’s far from enchanting. Just over 1500km of arrow-straight tar in the company of far too many kamikaze 22-wheeler drivers. Enough to numb the spirit of travel. So, I was less than inspired when given the news that I would be doing just this trip with the brand-new, facelifted Mazda BT-50.

Luckily, part of the brief was to find an inspiring, gravel-oriented back-road route. What should I do, then? Take a massive detour to the Northern Cape and head up to Augrabies Falls, then drop down via the West Coast? Perhaps go through the middle country, traversing the Groot Karoo, and into the Tankwa from there? The third, and most efficient, option would be to stay reasonably close to the southern arterial routes and visit all the tiny dorpies along the way, keeping to the most remote gravel links between dots on the map

I wanted to get to Cape Town within five days of my departure, so that set the schedule to some extent, and it was the last option that I chose. Despite my initial despondency, it turned out to be one of the most enjoyable trips of the year.

Our stallion for the long ride ahead – the just-facelifted BT-50 – would become my home for the next week. I would sleep on it, and in it, and cover about 2500km in total – almost 1000km more than the usual JHB-CPT jaunt.

There is a whole range of B&Bs, lodges and hotels in Ladybrand. I stayed at the Travellers Inn Hotel and it offered basic, clean rooms for a reasonable price. The town of Ladybrand doesn’t offer much of interest at all for passing travellers, but they do have a good pizza joint (Spizzy Pizza) and a couple of local bars. Ladybrand uses both the Rand and the Maluti as a common currency, so make sure that you receive your change in Rand if you’re not staying for long.

The time in this town was one of the highlights of my trip, and you’ll find a whole list of places to stay here with just a quick Google search. For my accommodation, I opted to camp at the waterside under the stars by the lake. Bethulie offers a spectacular lake for fishing, as well as access to the Orange River and the extremely impressive 1.2km span of the DH Steyn Bridge, which serves both trains and cars. The bridge connects the Eastern Cape and Free State provinces and is the longest road/trail bridge in Africa. Although I camped, a stay at the local Royal Hotel was recommended.

I drove from Bethulie to Knysna on this day, because my friends’ parents were braaing garlic prawns and I couldn’t miss an opportunity like that. It was an insane drive and I was foolish not to stop in Graaff- Reinet, which has plenty of accommodation options, as well as the Camdeboo National Park, which is an absolute must-visit destination if you’re in the area. Try out the Oyster Creek Lodge, based on the lagoon, with reasonable prices.

I pushed from Knysna to Cape Town, primarily on gravel, and it should have taken two days. Stop at Malgas for the night and book into the Malagas hotel if you’re replicating this trip. 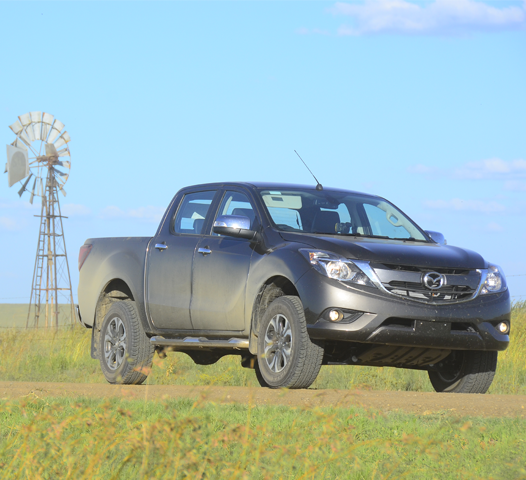 Launched back in 2012 when Mazda was still linked to Ford, the BT-50 ran the same underpinnings as its Ranger brother, and was even built in the same factory in Silverton. Since separating from Ford in 2014, Mazda has taken control of its brand and is making waves in the car world. Mazda now sources its new BT-50 range from its plant in Thailand.

The latest facelift of the BT-50 is the first change that Mazda has made since its inception. A milder, less swoopy approach has been used on the front end, although the rear still looks much the same. In my humble opinion, the BT-50’s new styling is a huge improvement and looks much more masculine, while maintaining Mazda’s curvaceous ‘Kodo’ design.

Under the skin, Mazda has kept Ford’s underpinnings, with their 2.2-litre and 3.2-litre turbodiesel engines the only options. For this trip, I was delighted to have the powerful 3.2-litre five-cylinder mill churning away the miles. With 147kW and 470Nm, the thing is a beast on long roads and makes driving far less stressful when overtaking lines of trucks on long, boring straights. My average fuel consumption was 11.5l/100km, but with more-considered driving, I got that down to 10l/100km.

As for gravel travel, you’ll always find a lively rear end on an empty bakkie, especially with this kind of power. The fact that 4WD high can be engaged at up to 100kp/h is handy when one is transitioning from tar to fast gravel, and is a great safety aid. Continental Cross Contact A/T tyres also offer a good compromise on gravel roads and tar, and they showed minimal chipping after the trip despite encountering well over 1000km of high-speed gravel, as well as mountain passes and rocky farm tracks.

As for a place to be for 15 hours a day? Well, the leather seats are comfortable, and perforated, which prevents the sweaty-behind syndrome. There’s a USB input for your tunes, and the aircon is strong enough to fend off 40 degree 4×4 courses with ease. One thing missing was a touch- screen infotainment system and digital dash – Mazda hasn’t changed a thing on the interior since 2012, and it shows.

To summarise, I would happily drive the Mazda cross-country in preference to most of its competitors, primarily because of its powerful engine and responsive automatic gearbox. If you like the styling, and if fancy interior gadgets aren’t important to you, the BT-50 is still a good choice.

NB: At the time of publishing, prices for the BT-50 had not yet been confirmed, but in other markets, like Australia, the BT-50 is priced to compete with rivals like the Hilux and Ranger.