Arctic Trucks Amarok conversion It’s been said that form follows function, but I questioned this belief while standing beside an Arctic Truck. 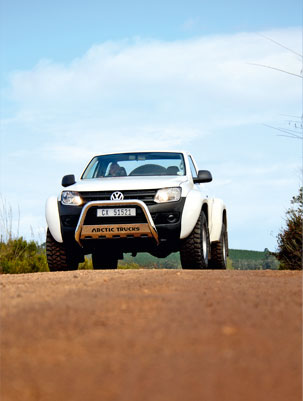 Sure, you can’t doubt its visual appeal, but how practical can they really be? Well, I recently had the opportunity to find out while visiting SA’s very own Arctic Truck division in Knysna, where the company was about to launch their newly converted Amarok – a sole SA development project. Most of us love the idea of a highly lifted 4×4. Unfortunately, it’s a catch 22 situation; more often than not a highly modified and lifted 4×4 will ultimately sacrifice on-road driveability in favour of off-road performance. Then, there’s a host of other problems that come with big lift suspension fitment: drivetrain vibrations, steering troubles, excessive body roll, insufficient brake line lengths and in some cases a harsher ride due to increased control arm angles. To top it off, a suspension lift kit will do nothing to increase your vehicle’s diff clearance as only a larger diameter tyre can help in this way.

So what’s so different with an Arctic Truck? Surely they also come with a host of negative on-road side effects?

Interestingly, they don’t. After driving two Arctic Trucks (Navara and Amarok) I was surprised to find that they drive very much like their stock-standard counterparts, begging the question: how do they do it? I put this question to Geert and Dicky Jurgens, business partners and co-founders of the Arctic Truck SA division.

Geert and Dicky started the company roughly two years ago, when they met with the brand’s Icelandic forefathers. The South African based company has since converted numerous Hilux bakkies, as well as Isuzu, Prado, Land Cruiser, Navara and Amarok models. What’s more, from what we’ve been told, they’re currently working on the new Ford Ranger too. The secret behind the Arctic Truck conversion – and the fact that they don’t overly compromise on-road drivability – lies in the fact that the vehicle’s suspension, drivetrain and steering geometry is largely unaltered. Rather, the modifications made to these vehicles takes place on the body of the 4×4 and the fitment of larger tyres.

In most situations, an Arctic Truck offers improved off-road abilities thanks to their increased ground clearance measurement. The Amarok we drove went from 190 mm of ground clearance up front to a towering 310 mm under the front bash plate and 285 mm under the rear diff. While many of us associate Arctic Trucks with big 42” balloon tyres – commonly seen in Iceland’s snowy conditions – the trucks available in SA are designed according to our specific conditions, which in most cases, is best adapted to a 35” tyre. Customers can request a larger tyre but this option will hugely increase the price of the conversion as further development work will be needed. As is the case with any Arctic Truck conversion, each kit is extensively tested off-road, on-road and at Gerotek’s advanced testing facilities for strength, durability and safety. It’s worth noting that an Arctic Truck conversion includes a 12-month warranty covering the vehicle’s body, wheel and mild suspension modifications.

Each conversion will vary according to vehicle type; in the Amarok’s case the conversion includes new coil springs upfront, adjustable Koni shock absorbers, a body-lift kit, glass-reinforced fender flares, custom designed alloy rims and an onboard computer gadget that corrects the vehicle’s speedometer / odometer reading after the larger tyres are fitted. As far as driving impressions go, I was particularly impressed by the Amarok and Navara’s handling, as neither vehicle exhibited noticeable bodyroll; plus, their power steering systems felt completely unaffected by the larger tyres – it was no more difficult to turn the steering wheel than it would’ve been if standard sized tyres were fitted. Naturally, the most obvious question is whether engine performance suffers from the added weight and rolling resistance of the bigger tyres. The short answer is yes; because the diff ratios haven’t been changed to match the larger tyres there is a noticeable drop in engine performance – particularly in top gear when the revs drop low. However, it’s not as bad as you might think and I was pleasantly surprised by the fact that the 90 kW Amarok could still climb a steep gradient with ease and overtake slower moving vehicles.

You will, however, notice a slight decrease in braking performance at speed – bigger tyres are harder to stop – and possibly a minor increase in brake wear. But it’s not significantly worse, not to the point where you’ll feel unsafe or afraid to drive the vehicle at speed. Perhaps what’s most surprising about the Arctic Trucks is who’s buying them. It’s not just the recreational 4×4 market – there’s an equal demand coming from the commercial sector too, particularly farmers and miners who require better-than average ground clearance from their 4x4s.

So, whether you’re motivated by extreme off-road performance, or simply by macho good looks and jaw-dropping envy exhibited by fellow road users, an Arctic Truck conversion may be the mod for you. But one thing’s for sure, if you’re gonna go this route you better order an extra spare, as there ain’t many places in Africa that’ll stock 35” rubber.