As one of the least densely populated countries on the continent and one with a stunning array of wildlife and natural beauty, Botswana is high on the must-see list for any visitor to Africa, and a country I have been looking forward to for a very long time.

It has extremely strict conservation laws, and in the more than 17% of the land mass dedicated to National Parks, animals roam freely and are a fixture of everyday life. National Parks are well organised and affordable, and thousands of kilometres of remote tracks lie waiting to be explored. In many regions, it is much more likely that you will meet a pride of lions than another human being.

Crossing into Botswana is by far the easiest International Border of my entire expedition to date. A one-month entry stamp in my passport is free; and, at Customs, I pay only $32USD for road tax and mandatory state insurance before the Jeep is good to go. I ask the Customs officers about a Temporary Import Permit, but it’s clear they can’t be bothered to write one out − which is perfect, because I can’t be bothered to wait. Maybe I’m getting lax about all this paperwork stuff! 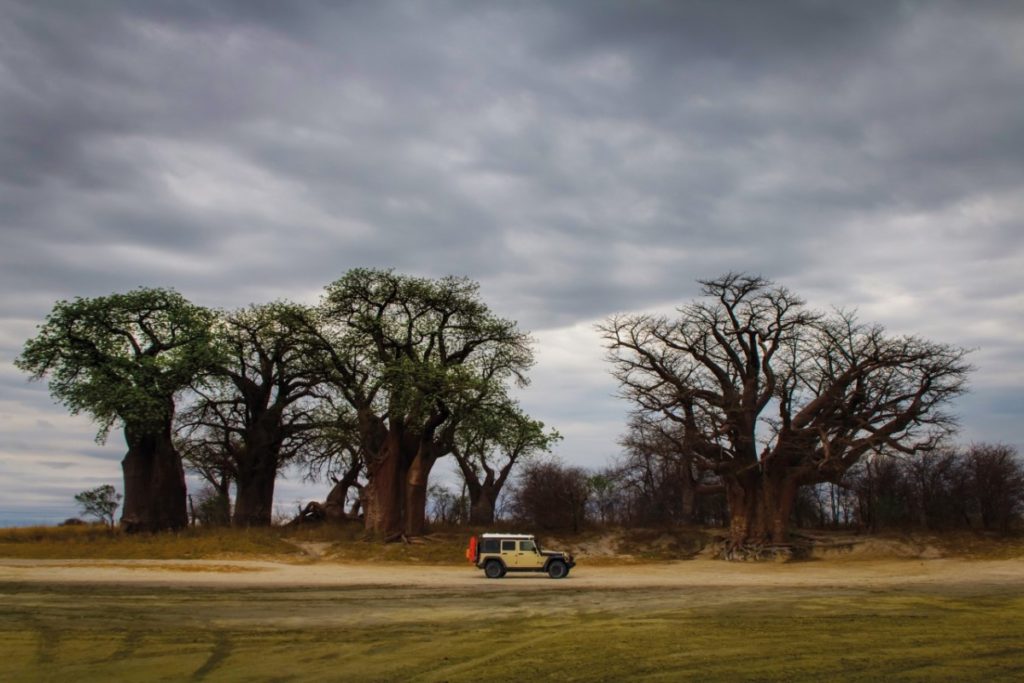 I have high expectations for Botswana, and am not disappointed after only two hours in the country, when I have to stop on the highway to allow a herd of over 20 elephant to cross. About half the herd are bigger than the Jeep, so I’m very happy to give them the right of way.

Moremi lies on the edge of the stunning Okavango Delta, and boasts wildlife astonishing in both sheer numbers and diversity. When it was created, the region was declared a Game Reserve rather than a National Park, so the BaTawana Bushmen that lived there were allowed to remain. The best campsites in the park can be booked out as much as a year in advance, though somehow I luck into a vacancy in the most highly-regarded area of the park – Third Bridge Campsite. 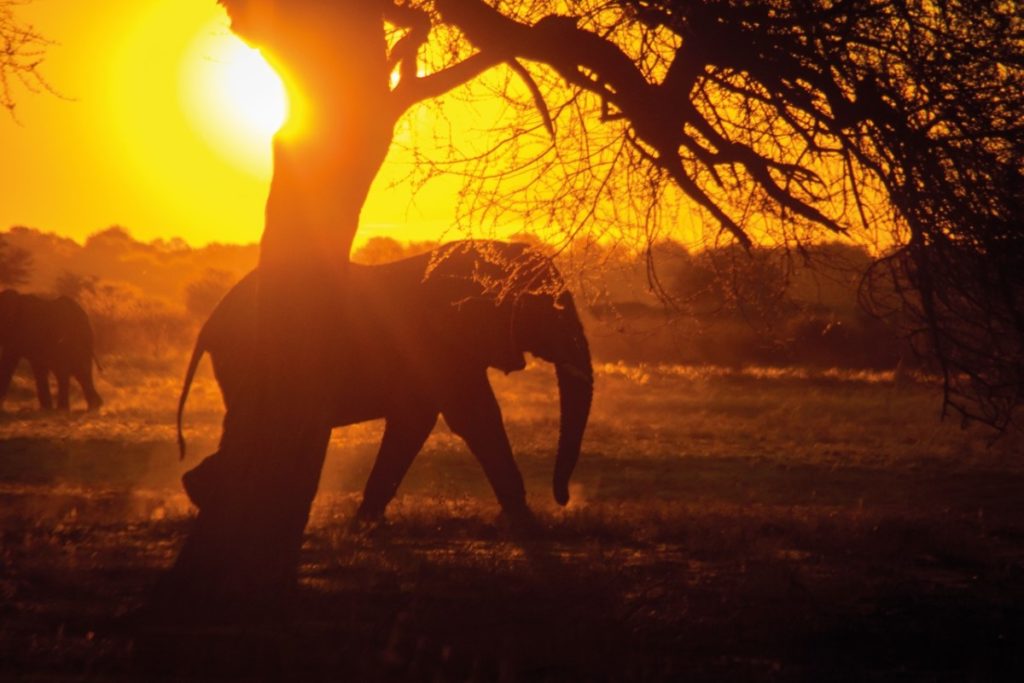 Wildlife viewing is always best at sunrise and sunset, so I plan to enter the park when the gates open at 6a.m. Wanting to be close to the entrance in the morning, I make my way to within a few miles of the entrance gate and find a clearing to make camp in the late afternoon.

After dinner, I’m relaxing in the cool evening when I hear rustling in the nearby trees. With no idea who or what might be sharing my wilderness camp, I keep staring intently while I prepare to dive into the Jeep. In the fading light, I recognise the silhouette of a herd of elephants walking in single file along a ridge less than 30 metres away. I sit and watch quietly as they amble past… a spine-tingling experience.

Later, in the dead of night, I wake to the sound of lions panting and breathing heavily. I have no idea how close they are, and have no intention of finding out.

In the morning, I enter the gate at exactly 6am – mine is the first official visit of the day to be recorded in the log book. Always on the lookout for animals, I navigate smaller and smaller sandy rutted tracks, and by 7a.m., my eyes are hanging out of my head. I stop near the edge of a small clearing to watch one of the many antelope species graze, and am stunned to see two huge male lions sunning themselves less than 100 metres away. The lions are hiding in plain sight, and I almost missed them.

Zebras, wildebeest and other critters walk quickly past restlessly – apparently they have no choice but to get uncomfortably close to the lions. I suspect that these are not hungry, however, as neither one pays the animals any notice or moves so much as a foot. After soaking in the spectacle for half an hour, I move off − only to stumble almost immediately across two female lions, where they are lying directly on the sandy track. It’s clear they have no intention of moving, and I’m forced to drive off the track to avoid hitting them. 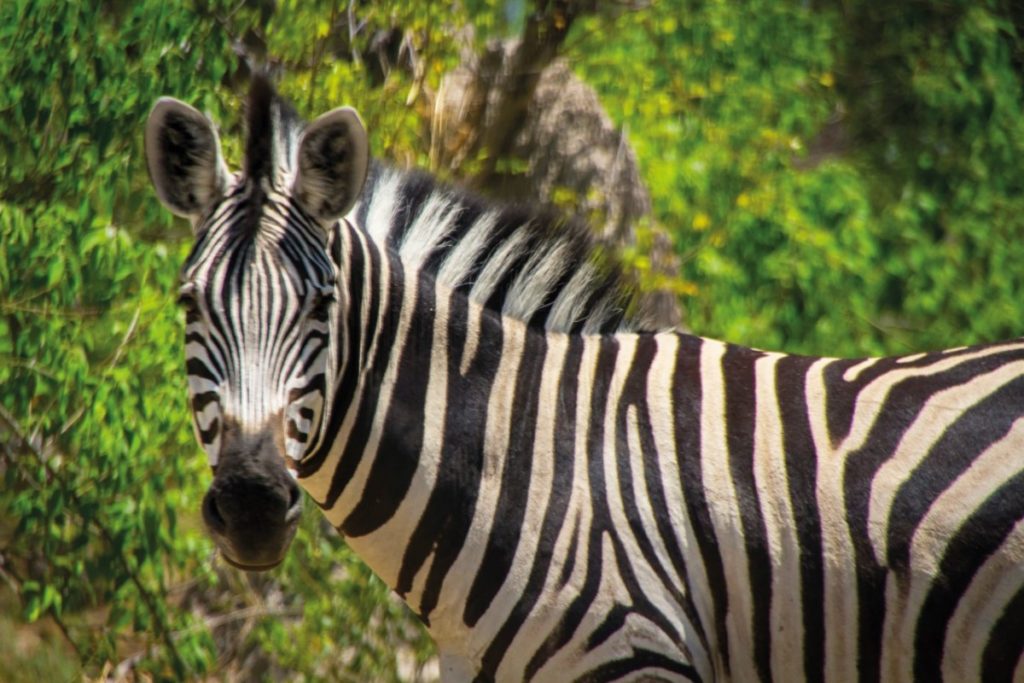 The females are lying on the edge of much larger clearing, keeping a close eye on the large herds of hoofed animals passing in the early morning sunshine. I have been told repeatedly that as long as I stay in the Jeep, the lions will completely ignore me, and this appears to be true. They barely glance in my direction, even though I’m less than 20 metres from them, and they seem to completely ignore the engine. When I lower the windows, the lions apparently can’t smell me… or they simply don’t care.

I switch off the Jeep’s engine, and spend well over an hour transfixed by their every move. It’s fascinating to watch these enormous predators behave exactly like overgrown house cats. For the entire hour, the lionesses doze, only occasionally opening one eye as they roll over with feet in the air, before yawning and resuming their nap. I am simply staggered by their size. These animals are equally enchanting and terrifying.

Over days, I cover a vast amount of ground while exploring the far corners of Moremi, and each night I camp in the spectacular Third Bridge Campsite through which the resident leopard wandered only a few days ago.

I am reluctant to leave, and feel as if I have left a part of myself behind as I pass through the huge exit gate. I immediately feel better 20 minutes later at my familiar wild camp, as a group of giraffes poke up their heads to greet my arrival.

For the rest of Dan’s Botswana adventure, be sure to grab a copy of the November issue of SA4x4 before they’re all gone!