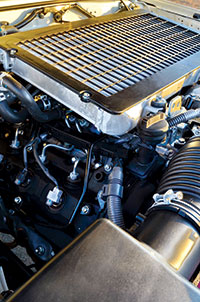 The Land Cruiser 70 Series is famed for its durability, long-term reliability and go-anywhere reputation. The only trouble with the LC70 range is its single diesel offering: a lacklustre 4.2-litre motor capable of 96 kW and 285 Nm, commonly referred to as the 1HZ.

For some time now, South Africans have yearned for an alternative power plant, and especially for the 4.5-litre V8 turbo diesel engine available in Australia. In fact, the development and fitment of this engine is the primary reason why the LC70 has a bulge in its bonnet – to add clearance for the V8’s size. It also serves as a painful reminder that South African LC70 fans don’t enjoy the same engine privileges. Fortunately, as of August this year, things have started changing, demonstrated by the recent introduction of the highly anticipated 4.5-litre, 32-valve, V8 turbo-diesel engine with common-rail direct injection and intercooler.

Three Land Cruiser models, the LC76 SW, LC79 SC and LC79 DC, are the latest recipients of this Euro 4-compliant engine, capable of 151 kW @ 3 400 rpm. What’s more important is that this torquey motor promises 430 Nm at an incredibly low 1 200 rpm. That peak Nm figure tapers off at 3 200 rpm, giving the new V8 the flattest torque curve of all Toyota engines. However, the LC78 Troopy model will not be fitted with this engine as yet. Code named the 1VD-FTV, the new V8 boasts 55 kW and 145 Nm more power and torque than the naturally aspirated 4.2-litre 1HZ. The eight-cylinder engine is matched to a five-speed manual transmission, and features a part-time 4WD system, low-range transfer case and mechanical freewheeling front hubs.

Toyota made special mention of the fact that the V8’s improved performance does not come at the expense of fuel economy, recording a combined consumption figure of 11.55 l/100km for all LC70 versions.

The new 4.5-litre V8 turbo-diesel motor is the first Toyota engine to utilise a graphite-iron cylinder block design. This technology reduces weight, lends itself to compact proportions and improves the engine’s resistance to the high-cylinder pressures commonly associated with turbocharged diesels.

The 1VD-FTV engine is a welcome addition to the range and a vast improvement on the 1HZ’s work-horse performance. However, it should be noted that the V8 is not replacing the 4.2-litre engine; instead, buyers will be given the choice between two diesel derivatives.

In terms of sales figures, Toyota forecasts an estimated volume of 600 units sold per month, across the LC70 range. It’s a tough target and a challenging figure, but with more than 1 300 units already on Toyota’s waiting list, the V8 may boost sales figures and attract new buyers to the LC70 brand.

All LC70 models come with a comprehensive 3 year / 100 000 km warranty. These models are also supported by the ToyotaCare Roadside Assistance Programme, which entitles customers to 24-hour roadside assistance.