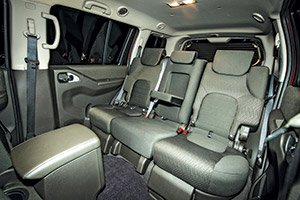 During the course of its eight-year lifespan, the Pathfinder range has received numerous upgrades and additions. But, for the most part, these minor improvements have had little effect on the vehicle’s overall design and market position. In fact, the only significant change took place in 2010, when Nissan introduced the Pathfinder V9X; an upmarket model which further enhanced the brand’s position as a premium SUV. Nissan stubbornly held their course, punting the Pathfinder as a premium 4×4 capable of rivalling the Discovery 4. Meanwhile, just below this price category, the Fortuner grew to be SA’s top-selling SUV, free to spread its roots in an unchallenged niche market. To make matters worse, the Pathfinder has continually lost its battle against public perception, where buyers expect all bakkie-based SUVs (Fortuner, Trailblazer and Pajero Sport) to be priced like their DC counterparts.

According to Nissan’s market research, many buyers in this category don’t need a 7-seater SUV. This doesn’t surprise us, considering the number of people who remove their Fortuner’s extra seats. Despite the SE’s significant price reduction, this entry-level Pathfinder still boasts a wide range of cabin features, including cruise control, Bluetooth connectivity, steering-wheel satellite controls, comfortable cloth seats, privacy glass, and dual-zone climate control with a separate controller for rear-seated passengers. 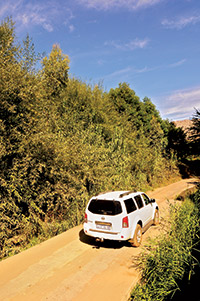 Regardless of spec level, all three Pathfinders share the same approach, ramp and departure angles, that being 30, 24 and 26° respectively. Likewise, all three models have the same ground clearance measurement under their sump (213 mm) and rear diff (260 mm)

Just like the Pathfinder LE and V9X, the SE isn’t fitted with a rear diff-lock. However, you still get a multitude of driver aids, such as the brand’s All-Mode 4WD system (2WD, 4WD Auto, 4WD Lock and 4WD Low), ABS, EBD, VDC, HSA, ABLS (traction control) and HDC in the automatic model only. As far as drivetrain options go, the Pathfinder SE has only one engine option: Nissan’s tried and trusted 2.5 DCI, capable of 140 kW and 450 Nm. This motor is mated to either a 6-speed manual, or 5-speed automatic transmission. Given the choice, we’d opt for the automatic gearbox, as a better complement for the DCI engine.

The SE’s underpinnings are no different to those of its upmarket siblings; you still get full independent suspension with double wishbones upfront and multilinks at the rear. This pliable setup is the key distinction between the Pathfinder and its bakkie-based rivals, which all sport a solid axle at the rear. The Pathfinder’s suspension system is its most distinguishable strength off-road, but also its greatest weakness. On rocky terrain, the Pathfinder regularly bottoms out and shows signs of limited wheel travel at the rear. However, when faced with poor road conditions and bad corrugations, the Pathfinder is one of the most comfortable SUVs on the market – far more refined than its bakkie-based competitors…