Here’s the scenario: you’re about to cross the Zim border, and up to this point you’ve done everything possible to ensure a smooth border crossing. But unfortunately, there’s little you can do about the corrupt border official asking you for a bribe.

So what’s the solution? You’re a man of principle and you don’t want to pay for a dodgy deal. Well, I’m not kidding when I say this, but you’ve gotta make yourself a cup of coffee. Getting upset will do you no good. In fact, crooked border officials love arguments. They want you to get angry. The more upset you get the more powerful they feel. The best approach is to sit back, relax and let them know you’re not fussed. Heck, you’ve got all day to cross the border. 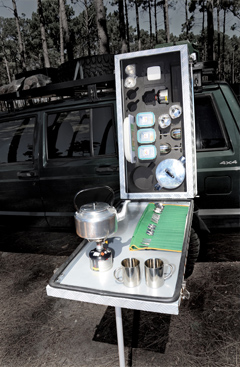 However, in order to pull off this bluff you need to play it cool. If he sees you unpacking your entire 4×4 just to get to the tea and coffee, you’ve lost the game – you’re having a miserable time and the official knows it.
Imagine the same situation, but this time, after refusing to pay a bribe you pull to the side of the road and within five minutes you’ve got a cup of coffee in your hands and you’re chilling in your comfy camping chair. That’s what the Alu-Cab Lunchbox can offer you.
It’s not a space-saving device; in fact, when installed on my Jeep’s roofrack the Lunchbox occupied roughly 25 percent of the rack’s total surface area. No, the Lunchbox is a tool of convenience and organisation. For starters, it houses everything you need from a kitchen unit in one organised compartment, including four cups, four co ee mugs, four plates, one cutting board, one pot, one kettle, two wine glasses, two gas cylinders, one gas burner, three sealable containers and a full cutlery set for four people. All of these items are neatly secured and organised in a thick sheet of high-density foam.

From what I can tell, the accessories appear to be well made.  e cups are made from S/S and the mugs are double walled so they retain heat.  e dining plates feel strong and the three food containers – used for co ee, tea and sugar – feature a 4-way lock so they seal air-tight.

The prime bene t of the Lunchbox is accessibility. As the unit’s mounted on your roofrack there should be no obstructions preventing you from accessing your kitchen – as would be the case if your cutlery was stored in a strapped-down ammo box.
The Lunchbox doubles as a work-top surface when the lid’s open. This alone is a hugely bene cial feature, particularly for SUV owners who struggle to  nd space for a 1 x 0.5 m table. And even if you do  nd a suitable spot for such a table, it may not be easy to access once the rest of your camping gear’s packed on top of it.  e Lunchbox features two lockable latches that secure the lid on the side, along with a cable-operated deadbolt system that releases the box and allows it to move along sliding rails. Once you’ve pulled the Lunchbox to the end of its roller-bearing track the box pivots downwards and rests against the side of your 4×4. A foam strip prevents the box from damaging your vehicle’s paintwork.

If you want to remove the Lunchbox altogether, simply unbolt the securing The empty unit retails for R4 450. plate on the side and li the box over the last roller bearing. Happily, the Lunchbox doesn’t weigh much – at 19 kg I had no problems removing / reinstalling the unit myself.

Of course, much of the Lunchbox’s low mass has to do with its full aluminium construction and the fact that it’s  lled with foam and plastic. In addition, you’ll never have to worry about rust issues or the hinges, latches and seals – Alu-Cab backs the Lunchbox with a lifetime guarantee.

Personally, I think it’s a terri c product, especially for disorganised okes like me who use engine bonnets as cutting boards and  ngers for cutlery.  e Lunchbox forces you to keep things in check, in the right place and ready to use.  ere are two other important factors to consider: price and pro le. Starting with the latter: the Lunchbox is not aerodynamic; when viewed from the side it looks like a giant silver brick.
That said, it’s not much taller than a roof-mounted spare wheel or a jerrycan lying on its back. Once packed alongside the rest of your overland gear the Lunchbox looks quite at home and part of the package.
Then there’s the matter of price. At R6 995 the Lunchbox ain’t cheap and you gotta wonder if it’s worth the lo y price tag. But only you can answer that question. For example, in my humble opinion, rooftop tents aren’t worth the money, because they occupy almost all your roof rack space, they weigh a helluva lot, you have to fold them up every time you want to go on a game drive, they’re not easy to remove, they permanently affect your fuel economy and they cost a small fortune.

But unlike a tent, the Lunchbox ain’t a necessity, it’s a luxury. A very convenient, multi-functional and highly-organised luxury. And in a game where weight is everything, there ain’t too many products out there that can offer similar rewards without the burden of excess weight. 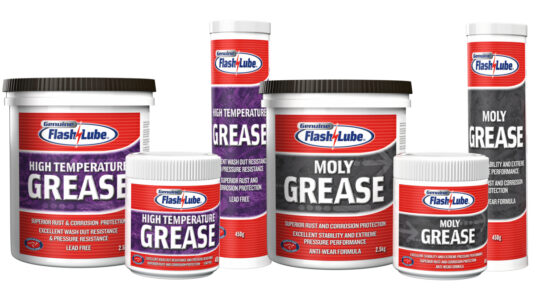