One of the first articles I wrote for SA4x4 was how to treat snakebite. Because I spend so much of my time in the bush, I thought it might be worth sharing my knowledge of how to avoid (or at least lessen) the risk of getting bitten.

The good news first, though. Of the 3000 known snake species, only about 250 species are considered to be of medical importance. Unless you are in Australia, which has a higher percentage of venomous snakes than non-venomous snakes, most snakes that you stumble across are likely to be harmless.

Snakes pick up ground vibrations through their jaw muscles, detecting your presence from the noise you make when walking. A snake will therefore move off long before you encounter it. However, there are exceptions to this rule. Many snakes such as Puff Adders (Bitis arietans) lie in ambush, waiting for their prey to chance by. These are the snakes which you are more likely to encounter.

A snake will not bite unless it is provoked into defending itself: it would rather avoid confrontation. The trigger mechanism for a bite is your movement. If you remain motionless, a snake will not bite you. But if you begin waving your arms around, or kick out in the vain hope of chasing it off, that makes you a threat.

Irrespective of the type of snake, remaining still is the best thing you can do.

Don’t try and kill it

One of the worst things you can do is try to kill the snake. The old belief that “The only good snake is a dead snake” is a hard one to change. 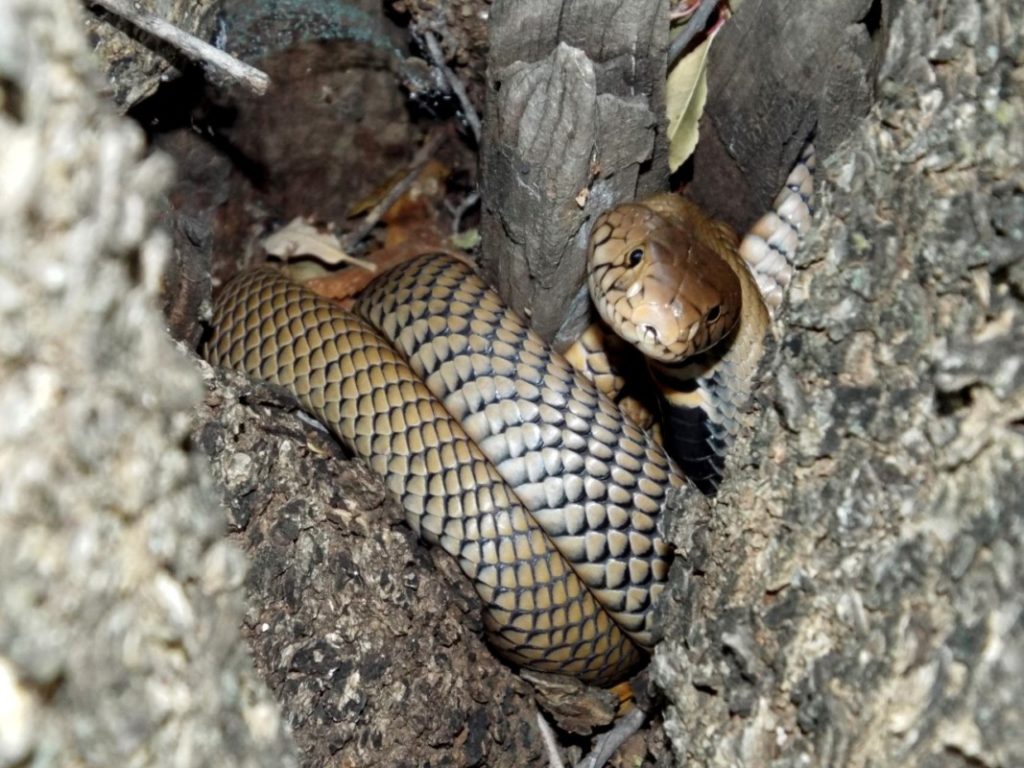 A number of cobras, such as this Mozambique spitting cobra can ‘spit venon’ as a defensive sign.

How can you get bitten trying to kill a snake? Most people are inclined to pick up the nearest stick and try to bash its brains out, but as you hit it, often the head end flicks upwards or backwards, and ‘bites’ you. Not good if it is a venomous species.

Several years ago in Botswana, two teenage boys spotted a snake in their village and began throwing rocks at it. One boy’s stone severed the snake in two, but when he picked up the dead head-section, nerve reflexes in the apparently lifeless body caused the body to jerk, and the boy was bitten. The bite proved fatal, because the snake was a Black Mamba.

Attempting to kill a snake can have serious consequences, so it is best to leave any snake well alone.

Don’t pick up a dead snake

Although the snake may be dead, it is difficult for the layman to determine whether it is a harmless or venomous species. Venom can remain active for a period of time following a snake’s death, and should you accidentally prick or scratch your finger on one of its fangs, venom could be introduced into the skin. The effect would be the same as if you had been bitten by a live snake. 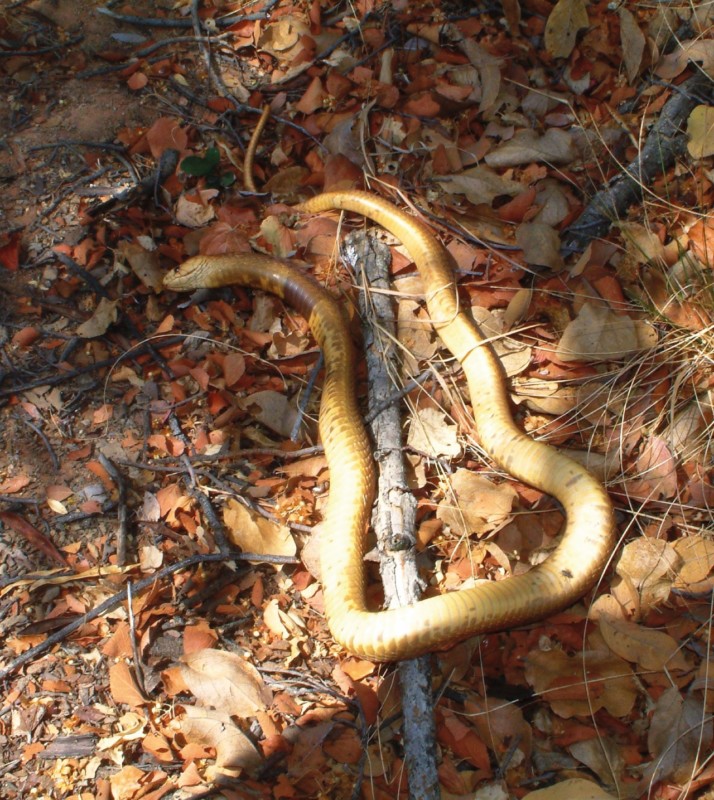 Never pick up a dead snake. This Snouted cobra is playing dead.

Another reason not to pick up a snake is that some snakes ‘play dead’ to avoid a confrontation. The Snouted Cobra and Rinkhals, both African species, are renowned for this, although this defence can be used by many harmless species as well.

A snake which is moving about one minute, and the next minute is belly-up, is a snake to avoid. The snake is acutely aware of what’s going on around it, and as soon as you attempt to pick it up, it will suddenly ‘come back to life’ again, and bite you.

Snakes may signal their presence by visual, audible or physical means.

Hoods: When confronted, a cobra will rear up and spread its neck to form a hood: a way of making it appear bigger and more intimidating. If you remain still, the cobra will fall back to the ground and move off. But, if you begin to move again, it will rear back up because it perceives your movements as a threat. Ignore the warning, and the cobra will begin making lunging attacks.

Spitting: Some snakes have taken warning displays to another level, and actually ‘spit’ venom. These snakes discharge their venom at the least provocation – which is strange, considering its high value in terms of securing food. The Rinkhals (Hemachatus) and 11 species of Afro-Asian Cobras (Naja) have evolved modified fangs which enable venom to be ‘spat’ at an antagonist. These fangs have a small opening on the front surface just above the tip. The inner channel of each fang may also have a spiral groove which puts a spin on the venom as it is discharged, increasing its accuracy. The venom is in fact not ‘spat’ out, but ejected by the jaw muscles squeezing the venom glands. It is aimed at the eyes, where it can cause permanent or temporary blindness, pain, and swelling of the eyelids.

Although most spitting cobras raise themselves off the ground in order to ‘spit’ their venom, the Mozambique Spitting Cobra (Naja mossambica) can ‘spit’ from a prone position, which makes it more dangerous. If, for example, it was hidden in a rock crack that you just happened to be peering into, you would receive an eyeful of venom. 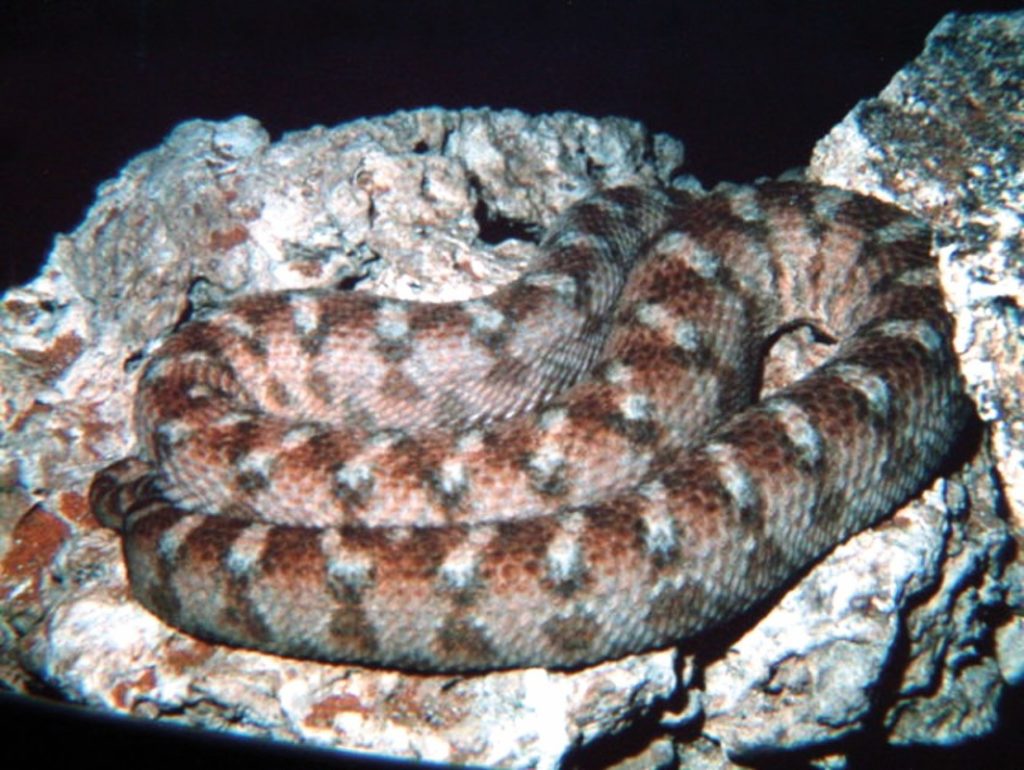 Some snakes such as this Sawscale viper rubs its scales together to produce a rustling sound as a warning.

Noise: Venomous and non-venomous snakes may advertise their presence by expelling air forcibly from their lung in the form of a loud hiss. Puff adders are the best exponents of this, hence their common name. Other snakes may use their tails, vibrating them rapidly against the ground.

Scale rubbing: When antagonised, some snakes manoeuvre their body into a series of closely adjoining loops. As one of these does so, it rubs specialised scales together, producing a sound reminiscent of sandpaper being used or Velcro being pulled apart. The Asian Saw-scaled viper (Echis carinatus) and the African Horned vipers of the genus Cerastes are good examples of this. Once again, the behaviour has been adopted by several non-venomous species, including the completely harmless Egg-eating snake Dasypeltis scabra.

If you come across a shed-snakeskin, you can determine the direction in which the snake is moving. As the skin is shed inside-out, the tail is pointing in the direction it is heading. 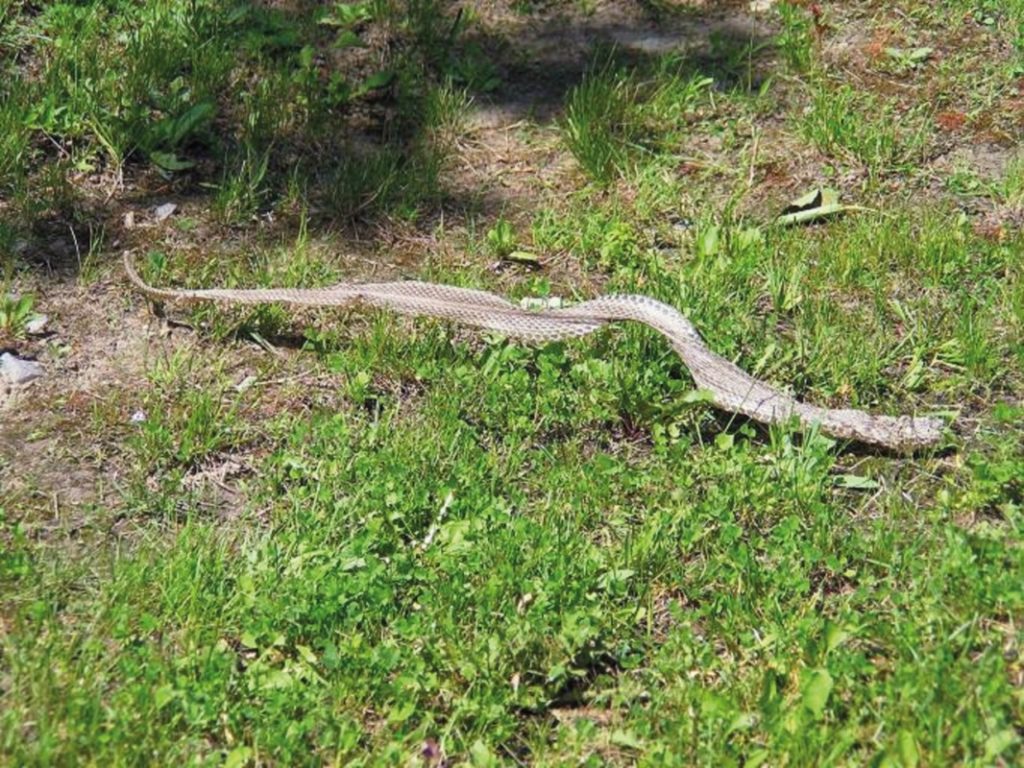 A snakes skin is shed inside out, the tail is pointing in the direction it is heading.

Tail-end
Don’t let the thought of encountering a snake spoil your trip. I can go into the bush for a week, and not see a single snake. But, if you do encounter one, use some common sense. Leave it alone, and don’t antagonise it.