Spending weeks in the bush has become a big part of my life − and I wouldn’t have it any other way. But, of course, not everything is rosy out there, and one thing which can make life hell is the hordes of biting and stinging insects. Having been on the receiving end of many of these over the years, I have come to learn that even the most inoffensive looking creepy-crawly can fight back.

Of course, many insects use warning colours or displays to alert you to their objectionable disposition, but despite this, I find that stings are still all too common. In this article, I thought I’d cover the treatment of insect and other animal-related bites and stings.

Few people actually die as a direct result of the venom of the insect itself; it is the allergic reaction (anaphylactic shock) which is the killer. If you know that you are allergic to the venom of an insect, always carry adrenalin in the form of an EpiPen® with you in an easily accessible place, and learn how, and when, to use it. 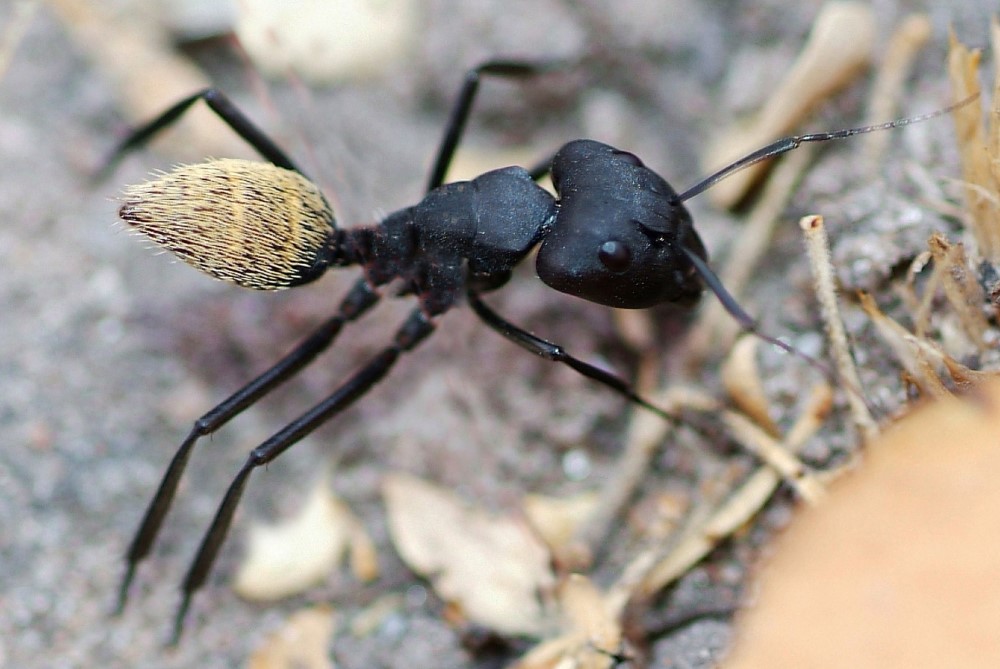 Small and insignificant, ants can give one heck of a sting

Ant stings
As small and insignificant as they may appear, ants can give one heck of a sting, particularly when they attack in force. I remember sitting on a rock, only to be brought to my senses when a Bal-byter soldier ant crawled up my shorts and bit me. I won’t tell you where, but there’s a big clue in the ant’s name! I don’t think I have ever moved so fast in all my life. Worker Bal-byter ants are also just as bad. Although they don’t sting, they tuck their abdomen beneath the thorax towards the head, and spray formic acid.

Depending on the type of ant, the venom can invoke a range of symptoms − including a spreading, itchy rash; swelling of the bite area, lips and eyes; dizziness, and breathing difficulties.

Treatment: Depending on the type of ant sting, the following first aid is recommended. Wash the sting, and apply a cold compress, antihistamine cream, or an alcohol wipe. Rubbing the bite with an onion, a cool teabag, salt, and peppermint or menthol toothpaste will also bring some relief.

If you carry painkillers, particularly aspirin, crush a tablet and mix it into a paste with water. Aspirins have anti-inflammatory properties, and the paste, when rubbed on a bite, will reduce itching and swelling. Some relief can also be had by covering the area with a burn dressing containing Aloe Vera. 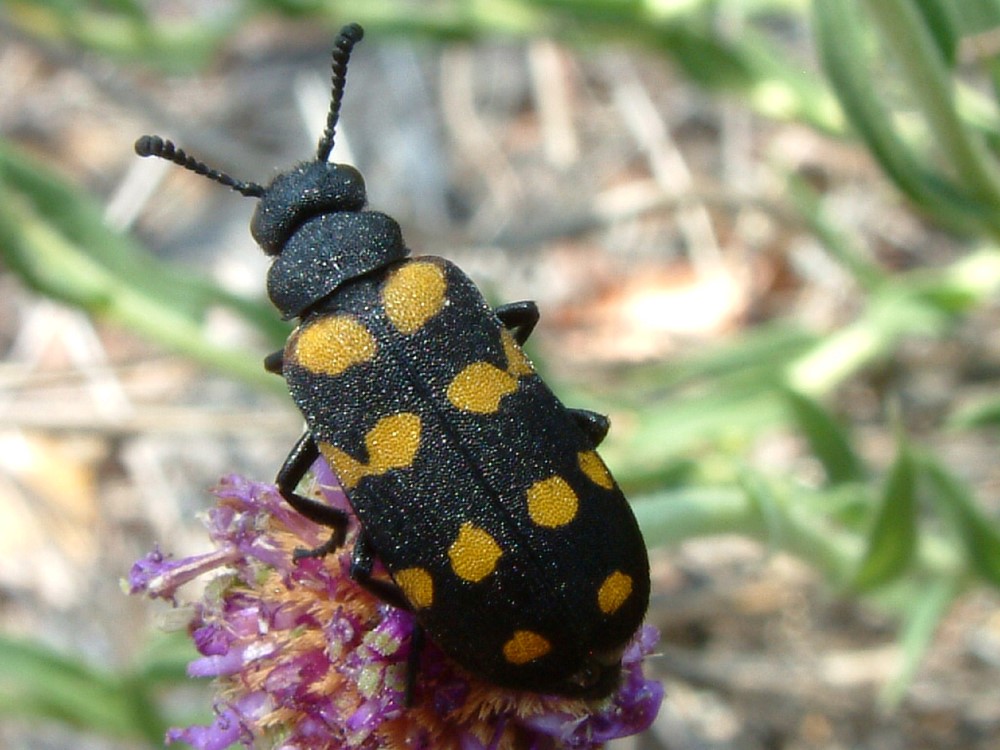 Blister beetles can cause blistering, extensive pain and burns.

Blister beetles
Male blister beetles produce a chemical called cantharidin, which they give to the female after mating. The female uses this to cover her eggs to protect them from predators.

Cantharidin is a clear, odourless liquid; if the beetle is squeezed or handled roughly, it is released in large quantities from the leg joints. The secretion should be washed from the skin immediately, as it may otherwise cause blistering, extensive pain and burns. Needless to say, if you inadvertently put your fingers into your mouth, the sensitive lining of the tongue and cheeks will become very painful. Even worse can happen should you get it in your eyes.

Treatment: Although the blisters may be painful, you are advised not to burst them; there is a risk of infection. Instead, treat them as you would any other blister. Note: any foreign substance in the eyes should be checked by a doctor as soon as possible.

Wasps
The severity of a wasp sting will depend not only on the wasp species, but also on the number of stings delivered. Swelling (in regions other than the area stung), throbbing, red blotches, itching, dizziness, feeling faint, and breathing difficulties may all develop. These should be checked by a doctor/hospital ASAP, as they could be an indication of the onset of an allergic reaction. If an EpiPen® is available, use it.

Treatment: Experience has told me that the best treatment is to rub antihistamine on the sting. Usually, this is enough; but several painkillers were also required after I’d been stung by a rather large Spider-hunting wasp.

Bees
Bees have the unsavoury habit of attacking in numbers when disturbed. It is thought that about 10% of people have some sort of sensitivity to bee venom. A bee sting elicits symptoms similar to those of a wasp sting: pain, swelling, blotchy skin, dizziness, breathing difficulty, tightness of the chest, etc. As with a wasp sting, get checked out medically ASAP.

Treatment: Bees are the only member of the <italics>Hymenoptera family with a barbed sting. Although wasp venom is more potent than bee venom, a wasp will usually sting only once, but a bee sting remains in the flesh after the sting and continues pumping in venom, which means that you get a much larger dose. This is why it is imperative to get the sting out as soon as possible, by scraping it out with a fingernail or knife. Avoid squeezing the venom gland, as that will pump more venom into the flesh.

Once the sting is removed, wash the area and apply a cold pack; this will relieve some of the pain and swelling. Or you can rub antihistamine on the sting area. 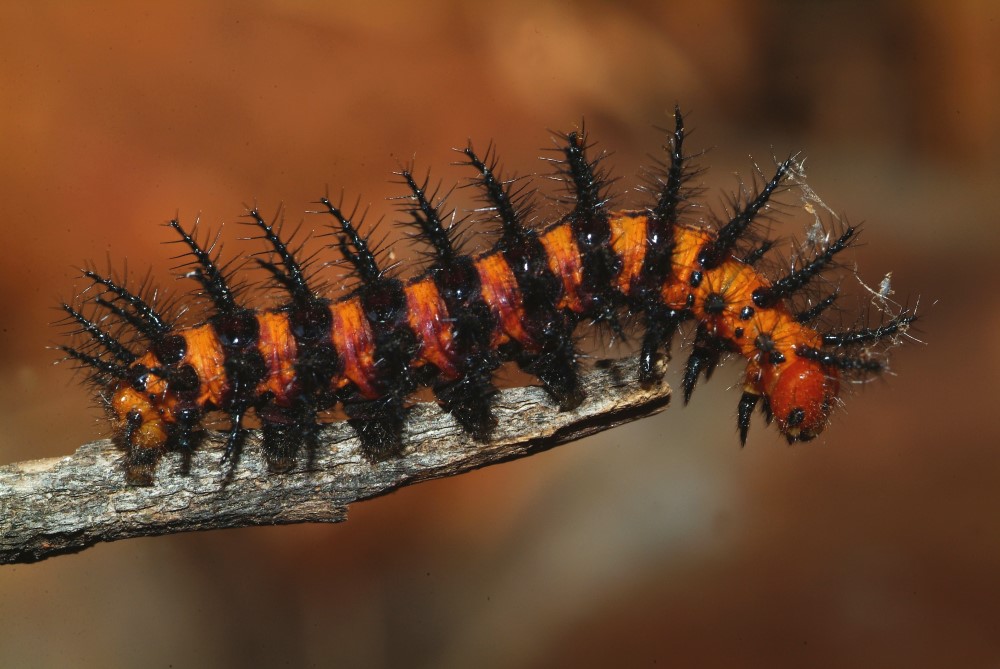 Watch those spines, they can be jolly painful.

Hairy caterpillars
Caterpillars, in all their fine livery, can be colourful and appealing, but this is usually because they have evolved elaborate means of defence. One of these can be a protective coat of hairs. The hairs of some species of caterpillar can cause excruciating pain, even if you just brush against them. And, once these hairs/bristles are imbedded in the skin, they itch like nobody’s business.

Treatment: Although many will advocate removing the hairs with tweezers, I prefer to use some sort of sticky tape, such as Duct tape. Applying antihistamine cream will alleviate any itching. If the hairs enter the eyes, flush with water and seek medical attention immediately.

Centipedes
A large Scolopendra can deliver an exceptionally painful bite, which should not be under-estimated. Symptoms following a bite include swelling of the site, skin discolouration, headache, nausea, and fever. Breathing difficulties and irregular heartbeat have also been reported. Fortunately, most side-effects will diminish usually within two to three days, with no lasting effects.

Treatment: Clean the bite with soap, and apply an antiseptic cream. Care should be taken to avoid contact with the centipede’s legs, as they produce a secretion which can result in an itchy rash. Antihistamine cream will relieve the itching, and a painkiller will help with the throbbing. 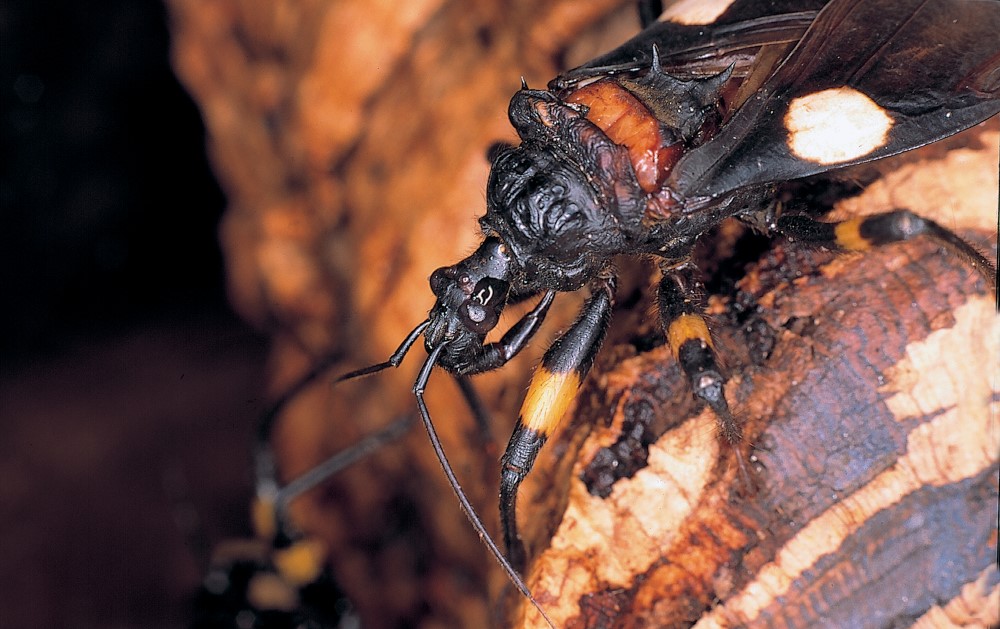 Assassin bugs have an elongated, channeled rostrum through which they inject or spray a highly toxic saliva.

Assassin bugs
Assassin bugs have an elongated channelled rostrum through which they inject a highly toxic saliva. Many species can even squirt their saliva over distances of thirty centimetres. If this enters the eyes, it can cause temporary blindness, and if it is inhaled, will cause intense irritation in the lining of the nostrils.

A bite can give rise to severe pain, raise a blood-red boil and cause swelling of the tongue and trachea, leading to breathing difficulties. More seriously, the saliva may, in certain species, carry parasites and transmit diseases.

Treatment: A good dollop of antihistamine cream will do wonders. 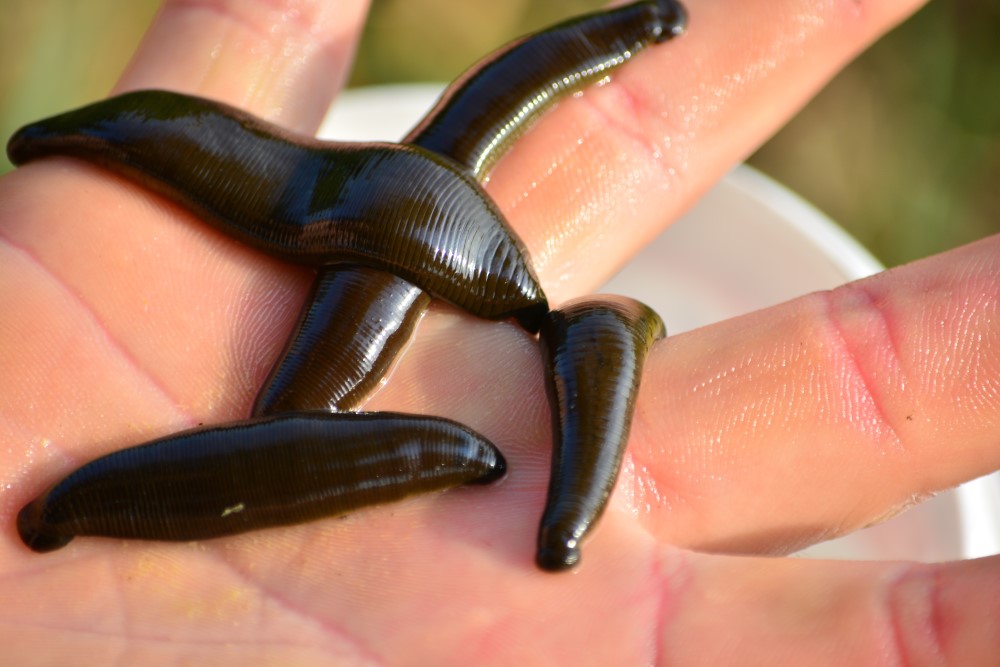 Be careful how you remove a leech, as you could leave its mouth parts embedded in your skin.

Leeches
The creature nightmares are made of. An alien-like thing latches onto your leg, and then begins to drink your blood. As it does so, the offending creature can swell to a disproportionate size. Fortunately, it won’t suck every drop from your body, so there is no fear of it drinking you dry; but a few are vectors for transferring blood parasites to humans.

As the leech bites into the flesh, it releases an anticoagulant which prevents the blood from clotting. The bite is almost painless, so it’s not until you look down and see the thing dangling from your leg that you realise there’s one there. Left alone, once it’s had its fill, it will drop-off naturally.

Treatment: Firstly, two DON’TS. 1) Don’t just grab hold of the thing and tug it off. Its feeding tube could remain in the flesh and cause an infection. 2) Don’t apply vinegar, salt, combustible liquid, or insect repellent; and don’t try burning it off. To do so may cause the leech to regurgitate its stomach contents, including any nasty bacteria, into your blood system − which could trigger a localised infection or even blood-poisoning.

So, what you SHOULD do. Using you finger nail, the edge of a credit card, a knife, or something similar, place it close to the skin and the leech’s head, and gently draw it backwards. This will cause the leech to let go.

The bite area may continue to bleed after the leech has been removed because of the anticoagulants it has released. If this is the case, apply gentle pressure to the area. Wash the wound with soap and water and cover with a plaster. Avoid scratching the bite, as this will make it itch. Antihistamine cream can help if it does begin to itch, and a cold compress may help with any swelling. If infection sets in, take a course of antibiotics.

Tail-end
Just because you have shown no symptoms from a previous insect sting, do not assume nothing will happen the second time around. Finally, do not underestimate the threat from innocuous-looking insects. They are often more of a threat than the larger animals, because of their sheer numbers.

Top bush tip: For many insect stings, rubbing them with an onion or a clove of garlic will bring some relief. Both have anti-histamine properties, reducing the symptoms of allergy.