Food is one of the priorities in any survival situation, or when we practise true bush craft by living off the land. The problem, of course, is in knowing which plants you can eat, and which you cannot. Eat the wrong one, and you could be in serious trouble. (I did discuss, in the February 2018 edition of SA4x4, how to determine whether a plant is edible or not by using the edibility test.)

In this issue, I thought I’d talk more about a cactus which is easily identifiable, which you can eat, and which is found just about everywhere. It is an invasive cactus from the Americas − which is a serious problem in many countries, but can be a food source in times of need. Yes; I’m talking about the infamous Prickly Pear Cactus (Opuntia).

This cactus is an easy species to identify by its large pads. The two parts of the Prickly Pear which can be eaten are the pads (also called the nopales), and the fruits. Very little preparation is required to make either edible.

The first time that I experienced Prickly Pear was when I visited my brother − who was living in Mexico at the time. We went to a restaurant where I ordered a salad. Amongst the foliage I was served were green strips which I thought were green peppers, but turned out to be strips of Prickly Pear Cactus. (You can buy packets of prepared cacti in supermarkets over there. They have a crunchy texture with a taste similar to peas, beans − or the peppers that I mistook them for.) 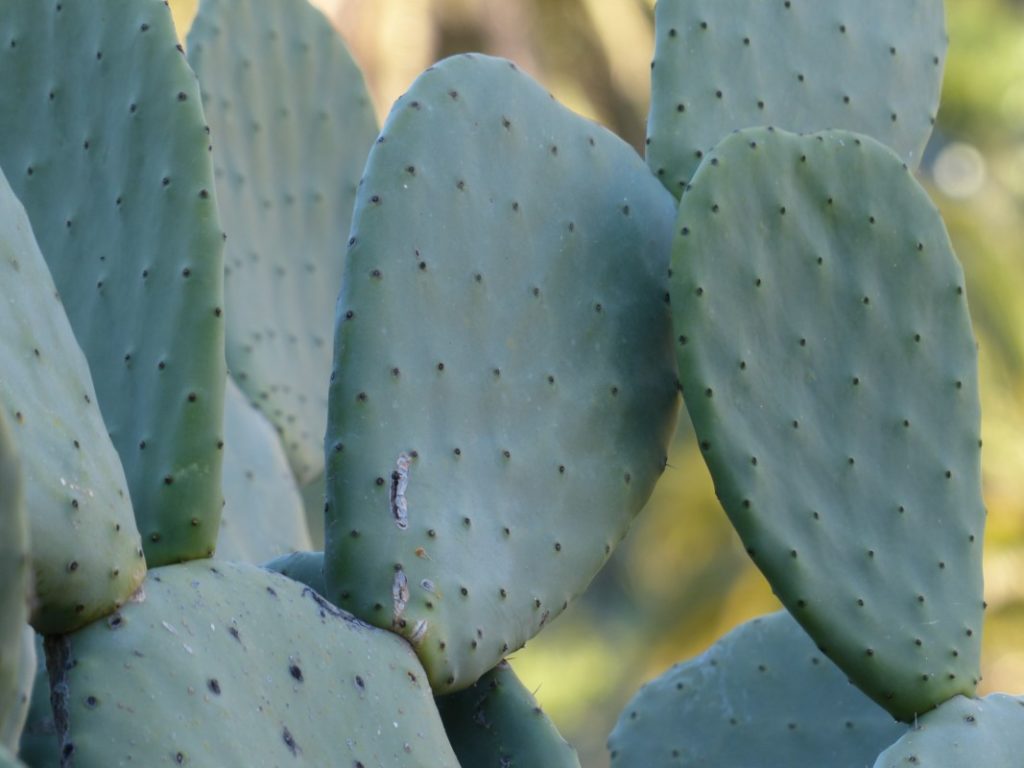 Choose the smaller pads to eat. Older ones are tough and tasteless.

Preparation of the pads is important, as the last thing you want is a mouthful of irritating hairs. I suppose preparation extends to not getting the spines and fine hairs (called glochids) in your hands, either. It is best, therefore, to wear a thick pair of gloves – which you will probably have to throw away afterwards as they will be covered in hairs. Or you could grasp the pad with two sticks, or a pair of braai tongs.

Harvest the young, fresh pads, which are about the size of your hand. Older and larger pads tend to be tough and less palatable. The pads should be vivid green in colour and firm to the touch. When harvesting, either twist the pad off, or cut near the base with a knife. 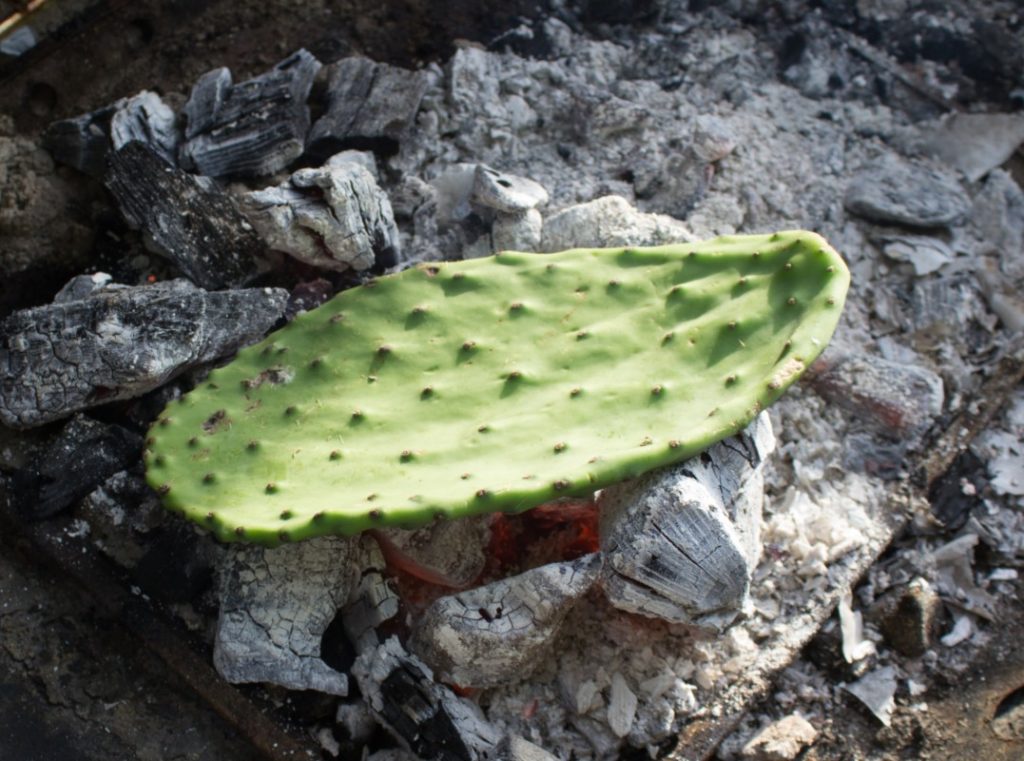 The spines and hairs can be burnt off over a fire, and the pad then eaten.

Next, the spines and hairs must be removed. This can be done by physically scrapping them off with the back of a knife, and then holding the pad over the fire to singe off any you may have missed. The pad can then be eaten as is, or roasted for five to six minutes on either side and then eaten. (I think roasting them imparts a better taste.)

The fruit of most cacti are edible, including that of the Prickly Pear. In fact, in many parts of Mexico, cacti fruits are considered a delicacy, and are often made into jams. They are rich in vitamin C, high in sugar, and high in fibre: just what you need in a survival situation. 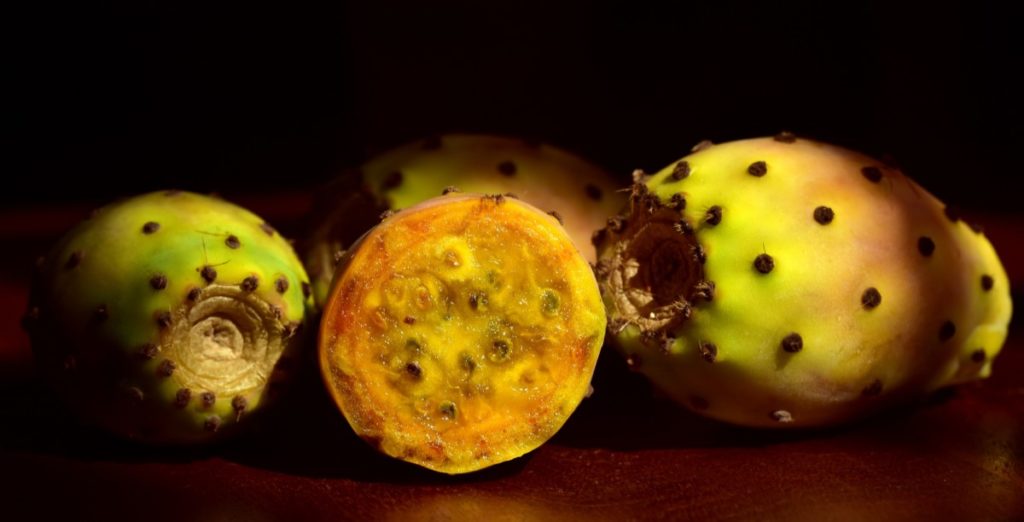 The fruit is rich in fiber, sugar and vitamin C.

To prepare them, you should peel back the outer skin of the fruit to remove the hairs − these can be very fine in some species, so be careful. Or, before you peel back the skin, burn the hairs off with a lighter or some other form of flame.

The fruits (which contain a lot of small seeds) can then be eaten raw, seeds and all. They taste very like watermelon, but have the texture of slightly-sticky kiwi fruit. They are quite sweet, but not overpoweringly so; and, even if they were, anything will taste good in times of dire need.

A note of caution

Often, in Westerns (or in those movies based on surviving a disaster), when the characters lop off the top of a cactus, gallons of fresh drinking water are there to save the day. Dispel that notion.

Although it is true that some of the larger species can store large quantities of water in their stems, most of that water contains high levels of oxalic acid, and drinking it can make you seriously ill.

Also, if you cut into a cacti and a milky-coloured fluid emerges from the cut, then it is almost certainly poisonous. This rule applies to any plant, and although there are exceptions, it is best to avoid any plant with a milky sap.

Drinking milky cactus water will cause severe stomach cramps, diarrhoea and vomiting. If you are already suffering from dehydration, drinking the water will take you deeper into dehydration, and put untold stress on your kidneys. 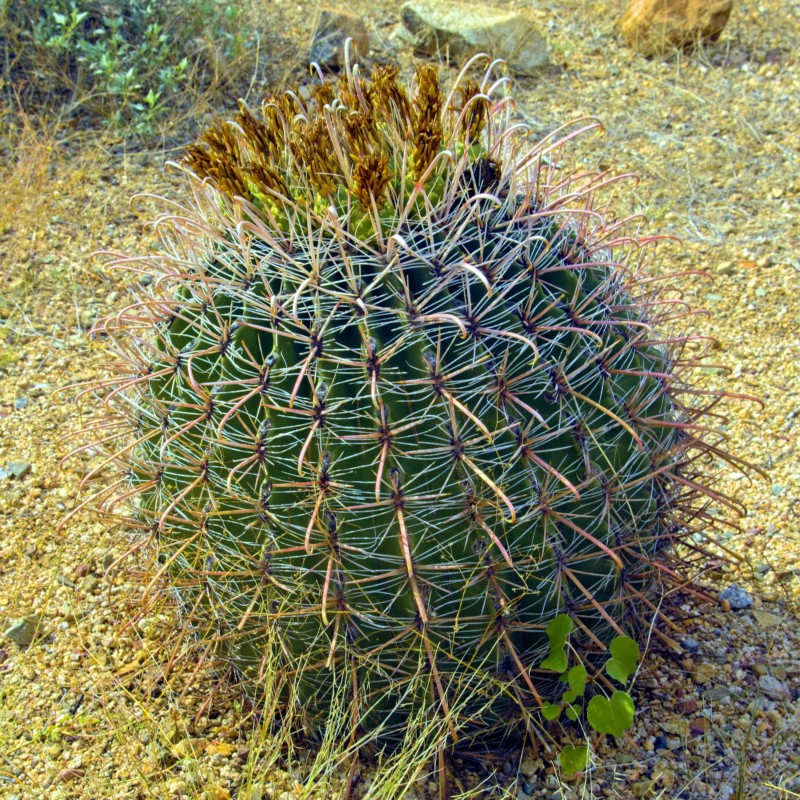 Water from the fishhook barrel cactus is safe to drink.

There are some cacti of which the water can be safely drunk. The five varieties of barrel cactus can yield quantities of drinkable water, the most popular of which is the fishhook barrel cactus, which gets its name from the large curved spines which resemble fish hooks.

Because of the wide distribution of the Prickly Pear, it is a species worth knowing how to harvest. Although the pads are moist, they do not hold as much water as you would find in a barrel cactus. To extract what water they do hold, pound the pads in a pot, and filter out the fibrous bits. What you are left with is a liquid very similar to the aloe drink that you can buy from supermarkets.

One thought on "Bush Craft: The prickly pear"