One of the reasons I enjoy teaching bush craft/survival techniques, is that it encompasses so many different skills sets. There are innumerable ways of starting a fire, we can use animals to find water, we can use nature to navigate, we have a host of ways to improvise shelters, and the bush is a veritable supermarket if we know how to identify the edible plants. And, of course, another skill we use is tracking.

There is always something new to learn when it comes to tracking, no matter how long you’ve been doing it. I’m still learning after all these years. If we know what to look for, and how to interpret what we see, it is possible to track everything from a millipede to an elephant. We can see that from the level of skill reached by the San Bushmen, who have honed these skills to the point where they see the world in an entirely different way to ours. We may walk past an obvious sign because we aren’t conditioned to see it, although to them it shouts out loud.

Tracking is a bit like reading. First, we begin with the alphabet, then we create words, then we string them together in a sentence; these are followed by paragraphs, chapters, and (finally) books. Part of the art of tracking, is decoding what we are looking at – rather like reading the pages of a book. We are being shown a lot of information, if only we could understand the language.

A track is not just a depression in the ground, it is also a window into that animal’s life. It can tell you what the animal was, which direction it was moving, whether it was male or female, its size, and its age. Was it walking, or running? You may even be able to tell its physical condition, whether it was feeding, and more besides.

When we think about tracking, we instinctively dip our head and look at tracks created on the ground. But tracking also involves visual and auditory signs: identifying signs of feeding, territorial marking, urine and faeces, vegetation, spoor, scent, shelters, and behavioural signs. It can also involve circumstantial evidence. So, it is as much about looking upwards, as it is down, and using senses other than just the visual.

Gathering together all the pieces of evidence allows each of us to become a forensic scientist who is investigating a crime scene. From the tiny signs, we can piece together a bigger picture of what was going on.

In Part One of this two-article series, let’s cover some basic terminology…

The word spoor is the technical term for footprints, but many people simply refer to them as ‘tracks’. The terms are interchangeable. 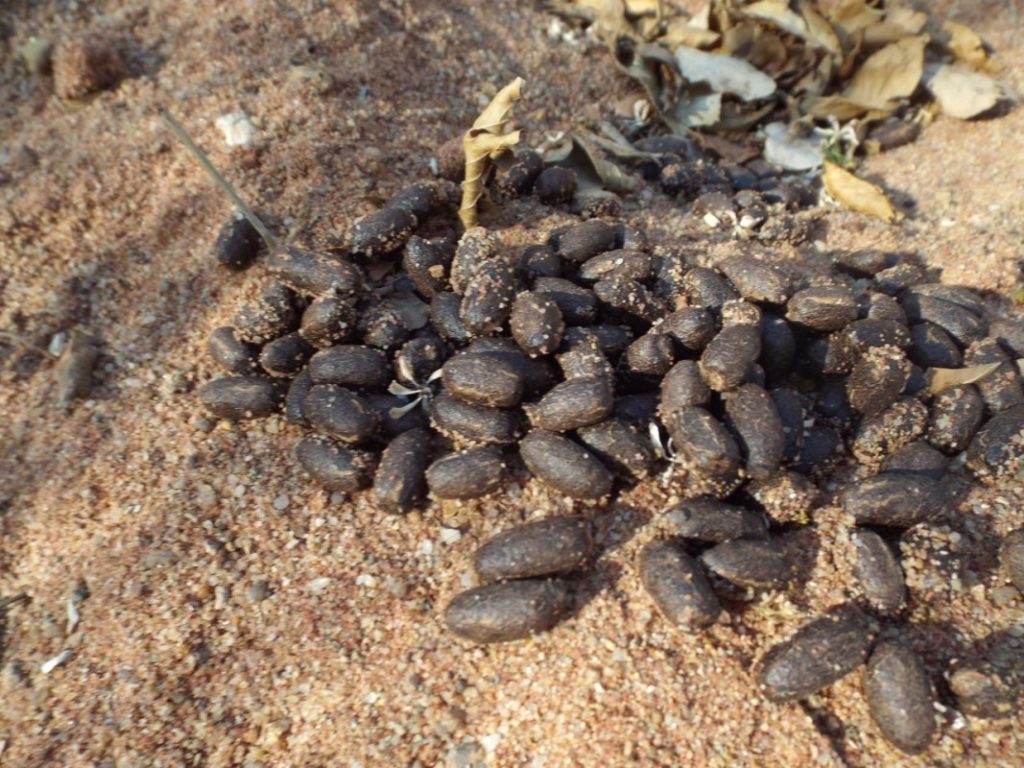 Scat is one of the visual signs as to the presence of an animal.

After spoor, scat is one of the most easily visible signs of the presence of an animal. Scat is sometimes simply known as ‘droppings’, or even ‘a midden’. Its size and mass not only identifies the species, but also how recently one of them passed by. Fresh, wet, ‘pungent’ droppings were deposited recently. Dry dung, with no odour, will be old. 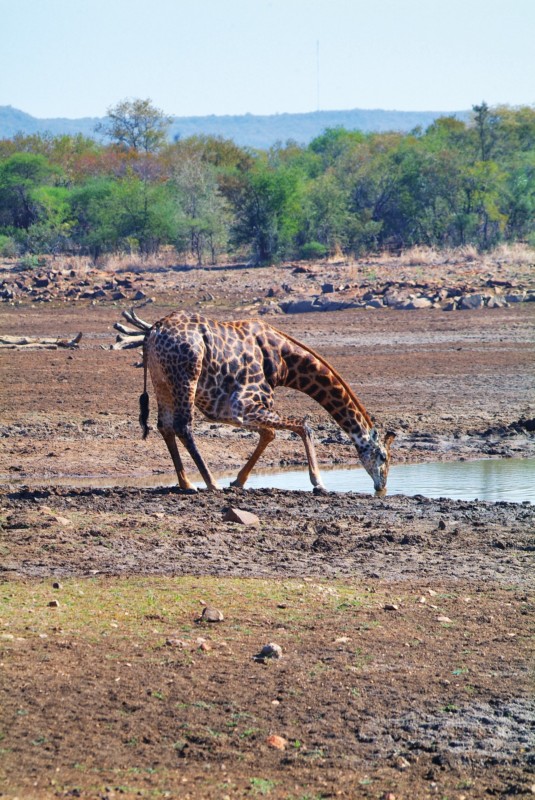 Runs are discontinuous, or recurrent tracks which connect trails to specific behavioural activates such as waterhole holes.

Wherever animals live, there will be evidence of what we call ‘thoroughfares’. These are the trails and runs which the animal uses or leaves. Trails may be used on a daily basis, or every season when the animals make seasonal migrations. In addition, they may be used by many different species of animals, (so are non-species specific), over the short or long term. This can make identifying and determining the age of individual spoor really difficult.

Runs, on the other hand, are intermittent or recurrent tracks which connect trails to specific behavioural activities, such as feeding, watering or sleeping sites. The best way to understand trails and runs, is to think of them in terms of a map. Trails are like the motorways connecting towns and villages; the runs are the streets which take you to filling stations, shopping malls or supermarkets, etc. 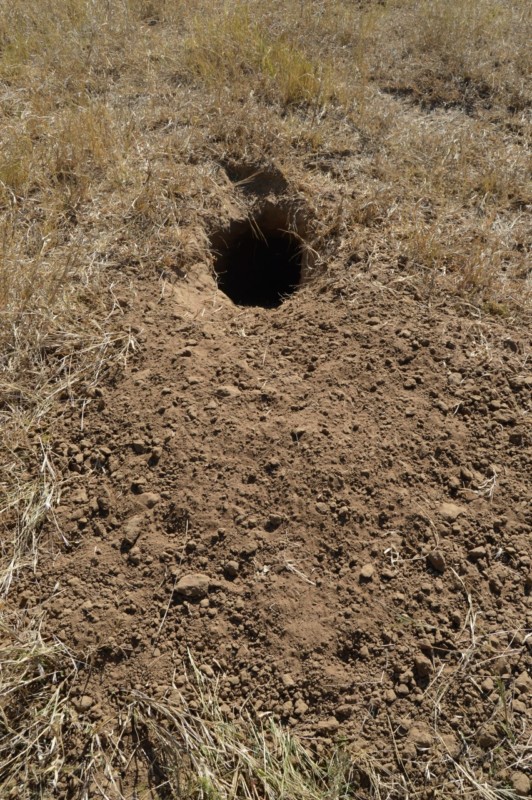 A den can take many forms.

A bed is an area where an animal sleeps, and is frequently called a den. Depending on the animal, this can be anything from a burrow in the ground, somewhere amongst grass/thickets/rocks, brush piles, or in the open, or even up in a tree. These beds may be used every now and then (as a transit bed), or as a once-off.

A lay is an area where an animal has been resting, or has spent the night. They are seldom used more than once.

It is not always possible to give a time frame for the animal’s presence, as much will depend on the type of ground or vegetation on which the bed/lay is found, and when you find it. However, there may be a temperature difference between it and the surrounding vegetation, which can give you an indication. 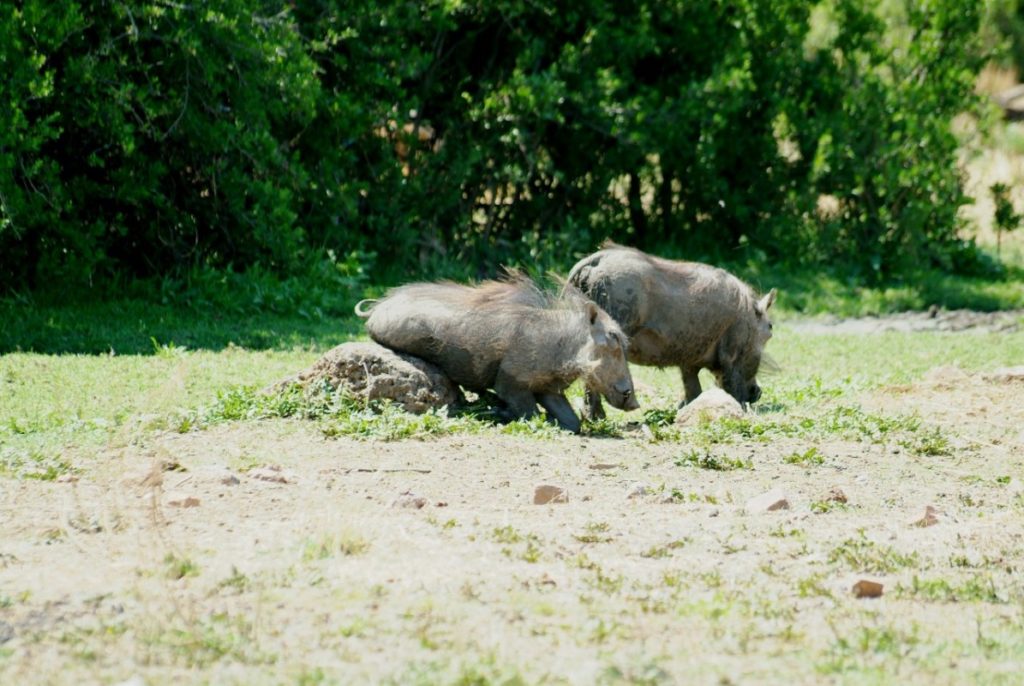 A rub can either be deliberate or accidental.

These are areas which can be deliberate, or accidental. A deliberate rub is where an animal has rubbed itself up against, say, a tree, in order to have a good scratch. An accidental rub may be where an animal has rubbed against a surface while attempting to negotiate it. For example, it may have ducked to pass beneath a low-lying branch, and its horns have scraped the branch.

As with rubs, these can be deliberate or accidental. An accidental scratch is where an animal has climbed over a log, and its claws have left claw marks which were obviously created through its need to negotiate the obstacle. One may also find evidence of its belly scraping over the surface, and the presence of belly hair on the log. A deliberate scratch is where an animal has reached up from the base of a tree, and then drawn its claws downwards, such as a leopard sharpening its claws. It may also show signs of climbing; for example, when the same leopard has scrambled up the tree to hide its quarry. Deliberate scratching can also be seen on the ground where an animal has buried its scat, or attempted to unearth food.

This refers to the relocation of material from one area to another. An animal which has passed through a muddy area will have picked up mud on its feet, legs or body (depending on how large the animal was, or how deep the muddy pool) and then deposited it, either wet or dry, further down the track. Dry tracks, or grass with evidence of wet mud, or mud which has dried but obviously got there by some obvious transit, are sure signs of an animal’s movement. 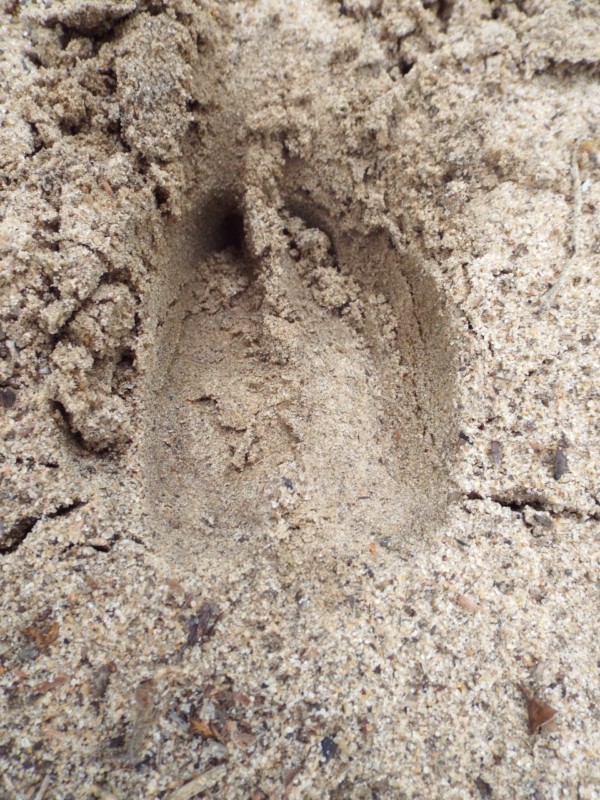 Wet sand will compress and leave a more evident mark than a hard surface.

As an animal walks or lies down, it compresses the soil to leave an obvious indentation, or compression mark. The type of surface on which the animal is moving or lying down on will govern the extent of the depression. For example, wet sand will compress and leave a more evident mark than a hard surface. Compression identity should not be restricted to just the imprint in the surface, but also how twigs, leaves and stones etc, have been compressed into the surface.

This is a sign an animal has left which makes you think, “That’s unusual”. It is something which looks out of place. As simple as this observation may sound, it requires a good knowledge of the bush, and animal behaviour.

Having to observe all these features makes us realise that tracking is 50% understanding of what we could term ‘sign tracks’. These are not the physical tracks themselves, but an accumulation of many of the above features. The other 50% consists of the physical tracks themselves. You will not often track an animal only by the tracks it leaves, unless of course the terrain in which you are tracking it provides the perfect surface. Which is seldom. Tracking is a well-honed skill to the San Bushman.

When I first began to learn tracking, (and I am still a bit of a novice), if I lost the track I’d become really frustrated and so got into the bad habit of skip tracking (cross-tracking), where I’d just follow another track, because it was easier. You don’t learn anything by doing that. Tracks don’t just end, and the animal vanish into thin air. It will leave some tell-tail sign of its presence, however small. If the track ends, spend time looking for other signs, even if it takes you two hours. Only by being able to identify these small signs will you make a good tracker. As they say, “the small things in life count as much as the big ones” − and that’s very true with tracking.