EXPLORING NAMIBIA’S SKELETON COAST
The Kunene River mouth is one of the most inaccessible places on earth. Guarded by a deadly coastline and a merciless desert, this most north-western point of Namibia has for many years remained a no-go zone for 4×4 adventurers. However as Grant Spolander recently discovered, there’s change afoot.

Sun-bleached bones litter this coastline like KFC packets on the Durban beachfront after Boxing Day; if the Seychelles is paradise found then Namibia’s northern coastline is Auschwitz reincarnate. To travel this region alone is like donning a KKK outfit and joining a Hillbrow street party – you’re asking for k@k and you’re gonna find it.
For more than 50 years Namibia’s northern shores were out of bounds, not just because this region would rather see you as a cadaver than a tourist, but also because until recently, the Namibian government believed it to be a rich source of diamonds.
As it turned out, things weren’t as profitable as they’d hoped – but what’s bad news for them is great news for us! Thanks to a newly-granted concession, Namibia’s upper coastal stretch will soon be open to 4×4 adventurers. You can’t go solo, but after spending a week or so scouting the region with desert guide Volker Jahnke and licensed operator Ojipupa Investment Group, I can confidently say that doing the trip in convoy is the best way to explore these parts. The final details of this tour had yet to be confirmed at time of writing but this article should serve as a rough guide to what you might experience.
Originally, our Bush Editor was meant to do this trip, but plans changed and I was told to suit up. Luckily, Patrick took care of all the arrangements and helpfully informed Volker – via email – that I’d be taking his place, and that I liked pink drinks and wearing ladies’ underwear. Thanks Pat… On meeting Volker in Swakopmund I made sure to give him a manly, vicelike handshake while I explained that our Bush Editor likes a good joke.
Our journey northwards began in Swakop, but officially the area we were surveying for a proposed 4×4 tour only began at Angra Fria – the start of the new concession. Before that, we made a quick fuel stop at Terrace Bay (the last fuel stop along the coast) and moved onwards to Möwe Bay, which is the furthest public access point before a permit is required.
The gravel stretch from Terrace to Möwe Bay is pretty uneventful. That’s not to say it ain’t worth a visit, but unless you plan on doing some serious fishing, there ain’t much to see on this road.
However, the real magic starts after Möwe Bay when you say goodbye to the gravel and hit the soft sandy beach of the Skeleton Coast – on your left the icy Atlantic laps a barren shore, and grass-covered dunes lay scattered to your right.
The drive northwards is a long and varied one, completely unlike the corrugated dirt tracks of before; here the ride’s cushioned by pillowing sand, and natural peaks and troughs that hazardously lull you to sleep. 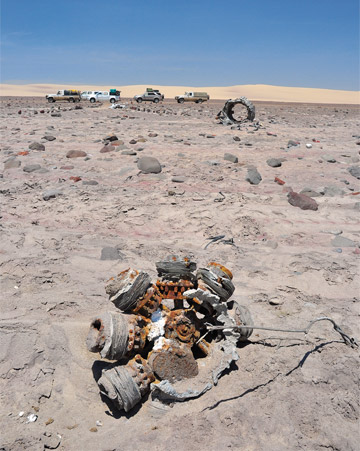 The following morning the rubber duck was inflated, the outboard motor attached and the raft was carried to a small beach alongside the river. The look on my face must’ve revealed some trepidations, because before we climbed aboard, Volker pointed out that the boat had four separate air compartments, and that a crocodile would have to bite all four chambers to sink the boat.
Well, the math added up, but there were still a couple of variables that concerned me. One: even with four inflated chambers our rubber duck was already half sinking thanks to the three groot okes onboard. Two: I noticed a pistol strapped to our motorman’s waist and I couldn’t help but envision a spooked gunman unloading 15 rounds through our raft because he thought he saw something swim by.
But as it turned out, we saw no suspicious logs floating upriver. We did, however, take in amazing scenery. The further up river we travelled the steeper the embankment became and the more dense the grass and reeds that lined it. Eventually, the Kunene River winds its way through a narrow, rocky gorge that towers skywards.
Spurred on by what we saw on the river, we were keen to drive our next leg of the journey, one which would take us eastwards along the Kunene and through a 50 km dune belt.
For the most part, the Kunene River remained on our LHS, offering constant assurance that we were on the right track. But every now and then we were forced to choose an evasive line that took us deep into the dune-filled desert – a pretty chilling sensation for a Cape Town ou lost without his Table Mountain.
Volker offered some reassuring advice on desert driving; for starters, because the region’s predominate wind hails from the south-west, the slip face of each dune always points in a north-easterly direction. And although some dunes may seem dauntingly impassable with their sheer slip faces, it’s interesting to note that no dune can be steeper than 42° – the cohesion properties of sand simply don’t allow a steeper gradient.
The dune belt ended as abruptly as it had begun. One moment we were clawing our way over a soaring yellow dune and the next we were descending into a far-stretching plateau known as the Hartmann Valley. Officially beyond the borders of our surveying concession, the Hartmann Valley is open to all self-drive explorers, and as far as a tour of Namibia’s northern coast goes, it’s the perfect way to complete this beachy trip.
In complete contrast to the bleak shores of the Skeleton Coast, this wide valley is indescribably bountiful. The Hartmann Mountains splinter upwards as the eastern border of this grassy plateau, and on the western side a tweespoor path snakes around lifeless dunes that lie like spilt salt on the edge of a wildlife-covered table. Gemsbok, springbok and zebra graze peacefully in their hundreds.
Back in the office, I again considered what such a tour could offer 4×4 explorers, and then it hit me… unforgettable adventure.
Most of us can remember just about every holiday, trip or tour we’ve ever been on, but only a few of these qualify as truly unforgettable adventures. Once you’ve tasted the dangers of the Skeleton Coast, its salty sea air will linger on your tongue like strong coffee while its barren landscape remains inscribed in your mind like a jailhouse tattoo.

WANT TO DO THIS TRIP?
Contact Daggie on +264 63 202 824 or +264 81 279 4522 or email desertmagic@iway.na for more info. Please note that actual trip details may change from what is depicted here – this was a recce trip, the final route was still being finalised at the time of going to print.

WHERE TO BUY PROVISIONS
Coming from the south, your best bet for beer, ice and braai chops would be Henties Bay, but I recommend you stock up before that in Walvis Bay or Swakopmund where there’s a larger number of shops to choose from.

ESSENTIAL GEAR
There’s plenty of sand driving on offer so recovery equipment is a necessity. Include a puncture repair kit, compressor, and if you’ve got one, a portable fridge / freezer – you ain’t gonna find ice out there. Two spare tyres would be a good idea too.

CONVOY OR SOLO
This trip is a guided route only. Those unaccompanied by a licensed tour operator, or without a permit, will be turned away at Möwe Bay.

ROAD CONDITIONS
The coastal road from Swakopmund to Torra Bay is a broad, good condition salt road. From Torra Bay onwards a corrugated gravel track takes you up to Möwe Bay. Other than the corrugations, this road is in pretty good condition with few potholes to deal with; however, we did pick up a puncture on the way.
The gravel roads through the Hartmann Valley, Orupembe and all the tracks leading to the C43 freeway are in a bad state, and it may be a good idea to stock up on tyre plugs, and if you can, carry an extra spare.

MAPS & DIRECTIONS
Because this route is guided only, there’s no need to worry about a map. Also, not many people have visited this area so navigation software ain’t gonna help you much; here you’ve gotta put your trust in the guide.

VEHICLE REQUIRED
Softroaders are not be permitted on this trip, and nor are normally-aspirated diesels – dune driving requires high revs and lots of power.

RISK
At the river mouth you’re hundreds of miles from civilisation so be sure to pack a comprehensive medical aid kit; plus, the Kunene River mouth is reportedly a malaria area so bring mozzy spray and prophylactics.

FUEL
It’s advised that you have a total capacity of some 200 litres. If you’re driving something more economical than a 4500 EFI Cruiser you might be able to get by with less. Be sure to top up at Terrace Bay, the last available fuel source before the start of the trip.