On its release in 2010, the Amarok pioneered several technological developments within the double-cab market. As the climax of this evolution, VW has now launched an Amarok in automatic guise; a vehicle that will once again stir the pot of progression. Our Technical Editor pitted this model against the highly acclaimed Ranger 3.2 AT.

When we first heard of the new Amarok and its 8-speed automatic transmission, we had a sneaking suspicion that it would make a great tow vehicle. But the only way to know for sure was to compare the auto Amarok with a tough towing competitor; in this case, the torque’ative Ford Ranger 3.2 AT.

But there was an even more exciting matter to consider. The Amarok’s 8-speed automatic transmission is the first of its kind in the bakkie market – not only from a gear-count perspective, but because those extra few gears are designed to replace low-range. That’s right; the new Amarok AT has no low-range gearing… and it’s a fulltime 4WD! All in all, it’s a bold move for VW: a revolutionary stand in a market dominated by the Hilux – a winning competitor that seldom takes any great risks.

INTERIOR
Both the Ranger and the Amarok are incredibly spacious. However, the Ranger is the larger of the two in total length (5 274 mm versus 5 254 mm), and in wheelbase measurement (3 220 mm versus 3 095 mm), affording the Ford slightly more legroom.

As ergonomics go, we felt that the Amarok was better laid out, showing distinctive separation between its various features. For example, the radio / entertainment unit is completely isolated from the climate control system. Plus, the off-road driver aids are neatly grouped together, as well as the various miscellaneous items: door-lock button, hazard light and the switch for the exterior load-bay light.

In contrast, the Ranger’s controls are a little cramped. The design and layout look good, but the execution and practicality is slightly off. However, the Ranger does make proper use of its steering wheel, with a host of satellite controls to operate the radio/CD player, blue tooth phone settings and cruise control. The Amarok, on the other hand, uses the indicator stalk to house its dinky cruise-control buttons, which are practically hidden behind the steering wheel. 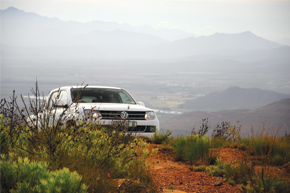 EXTERIOR
In my opinion, these are the two most attractive DCs on the market; but if I were forced to pick one, I’d save my drool for the Ranger. The Ranger combines elegance with ballsy masculinity. As far as bakkies go, it’s a work of art. However, from a functional perspective, the Amarok boasts better approach, ramp and departure angles – see our off-road comparison chart. But then again, the Ranger has noticeably more ground clearance: 237 mm, versus the Amarok’s 200 mm.

The Amarok’s paltry clearance is due to its smaller-thanaverage tyres and its over-engineered bash plate. As mentioned in our previous Amarok road test (December ’10 issue), this ultra thick, heavy-duty guard regularly bumps, scrapes and drags its way over rocks. It’s a disconcerting sound and an unpleasant experience off-road.

Externally, the Ranger feels (and sounds) like the tougher of the two bakkies. This applies to the weight of its doors, the solidity of its body panels when you tap them with your knuckle, and the mass of the tailgate – which is considerably heavier than the Amarok’s. But perhaps the most convincing sign is the fact that the Ranger is 212 kg heavier than the Amarok. However, it should be said that the Ford’s engine is 60% bigger than the VW’s.

ON-ROAD
Let me be blunt: I’ve never been an Amarok fan. In my humble opinion, the engine’s too small, it struggles with turbo lag, the clutch action is infamously finicky, and the gearbox is notchy. Every time I have driven an Amarok, the experience has left me cold and unimpressed… until now, that is. It’s amazing what a good transmission can do. The Amarok’s new 8-speed automatic gearbox has completely transformed this vehicle. Every issue with the Amarok we’ve complained about has been resolved with this gearbox. In fact, this new transmission makes you appreciate the technological marvel of the 2.0-litre BITDI engine. I used to be a staunch bigger-is-better believer, but this small-capacity motor makes sense on numerous levels – especially when mated to a good gearbox.

In sad contrast, Ford has taken one of the best turbo-diesels ever made (their 3.2 TDCI) and diluted its performance with a distinctly average automatic transmission. As mentioned in our previous road test of the Ranger 3.2 AT (April ’12), we’ve never liked the Ranger’s 6-speed auto gearbox – it feels unrefined and jerky, and the ratios are too widely spaced. Sure, if you have nothing else to compare it to, the Ranger’s gearbox is tolerable; but once you’ve had a taste of the Amarok’s super smooth 8-speeder, it’s like going from a bottle of Steenberg Chardonnay to a papsak of late-harvest plonk. The Amarok’s gear changes are completely, utterly, and, in the full sense of the word, seamless. But even more than that, the Amarok always selects the right ratio for the job, thus allowing its 2.0-litre BITDI engine to work in its optimal torque band on any gradient. 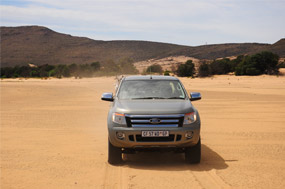 The Amarok’s superiority becomes even more apparent when recording acceleration times. Although the Ranger boasts the more powerful engine (147 kW and 470 Nm versus the Amarok’s 132 kW and 420 Nm) both vehicles share the same power-to-weight ratio. However, when accelerating from 0 to 100 km/h, the Amarok tore past the finishing line in 9.15 seconds, versus the Ranger’s 9.95 seconds. What’s even more astounding is that while the Amarok achieves faster acceleration times, it also returns better fuel economy. During our test, the Amarok’s trip computer reported a fuel consumption figure of 8.4 l/100 km on a combined cycle on a fixed route. The Ranger, on the other hand, slurped down an extra litre or so with a 9.6 l/100 km reading.

The same was true for our tow test, in which the Amarok used 10.9 l/100 km on the open road and the Ranger used 12.3 l/100 km. No matter what the terrain-type or driving style, the Amarok’s fuel economy was always a litre (or more) better than the Ranger’s.

OFF-ROAD
As mentioned before, the Amarok’s drivetrain is completely unique in the bakkie sector, and it’s not just the fact that this DC has eight forward gears. The Amarok’s most extraordinary feature is that those extra ratios are designed to replace low-range. In addition to its matchless transmission, the Amarok has a fulltime 4WD system with rear diff-lock. However, unlike many other fulltime 4x4s, the Amarok does not have a manual-locking centre diff. Instead, the bakkie uses a Torsen-type diff which allows the Amarok’s front and rear wheels to rotate at different speeds (such as around corners), but it also lets the vehicle shift torque to where it’s most needed – where there’s traction.

In normal driving conditions, the Amarok’s Torsen diff distributes torque in a 40:60 split (front:rear). However, depending on the terrain, that bias can swing to either 15:85 or even 65:35. It’s a highly capable diff; a similar unit is fitted to all 4WD Fortuners.

The Ranger’s drivetrain setup is more conventional, featuring a part-time 4WD system with centre and rear diff-locks, and low-range gearing.

In terms of off-road performance, the Amarok relies heavily on its traction control system and Hill Descent Control (HDC). In effect, the HDC system replaces the vehicle’s need for low-range gearing when descending a steep, slippery slope. It does this phenomenally well by slowly releasing the Amarok’s brakes and automatically sensing wheel slip. Unfortunately, the one drawback to this system is that it limits driver input and control – you can’t chose your output speed by matching the gear ratio to the specific slope. You can, however, adjust the HDC’s pre-programmed speed by gently accelerating. But you’ve gotta be incredibly careful; the slightest throttle movement greatly accelerates the Amarok’s descending speed. 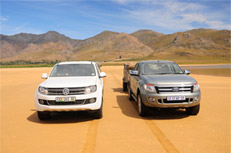 We drove a variety of terrain types during our off-road test, the first of which was a steep and slippery mountain pass in the Klipbokkop Mountain Reserve. In spite of the Amarok’s lack of low-range gearing, the VW never once felt underpowered. In fact, because the Amarok does everything for you from a traction-and-gearing point of view, it was the most relaxing vehicle to drive. On a few occasions, when the road got too slippery for the Amarok’s traction control system, we simply engaged the rear diff-lock and crawled through.

Much like any other 4WD bakkie, the Ranger uses low-range gears for tricky off-road work. This includes steep hills and slippery slopes. It would be impossible to say which vehicle outperformed the other on the mountain pass, but if you like the idea of technology doing everything for you, the Amarok is the better bet. Likewise, if you’d rather be involved in the driving process – relying on basic mechanical principles like gearing and engine compression – the Ranger is the 4×4 for you.

Sand driving was the real test. Most of us would think that a twisty, sandy track would surely be too much for the Amarok’s gearbox and lack of low-range. But, again, the VW had no problems selecting the right gear. What was even more impressive was the Amarok’s ability to change gears without losing momentum. On the subject of suspension: I, personally, didn’t notice a distinguishable difference between these two vehicles. Both the Ranger and the Amarok feature a comfortable, yet firm, ride on gravel. I’d say they’re more supple than a Hilux, but less flexible than the Navara or Isuzu KB.