The main crossing from Nigeria to Cameroon on the West Coast of Africa is the stuff that overland legends are made of. The Mamfe Road is only one hundred kilometres long, although it takes most well-prepared overlanders a week of slogging to cover that distance.

As the monster mud holes are big enough to bury even six-wheel-drive vehicles to their axles, many lesser vehicles remain stuck until they are dug out by a virtual army of locals, or rescued by tracked Caterpillar machinery. All of that is in the dry season. Traversing the West Coast of Africa in the wet season is completely impossible, primarily because of this one road.

However, as I learned recently, none of that is true anymore.

In January 2016, a Chinese crew finished rebuilding the entire road. One recent report says that the crossing can now be completed at 100km/h with cruise control engaged, and is actually mundane and boring.

I came to West Africa in search of adventure, and had been expecting this road to be a highlight of my West African traverse. As far as I am concerned, this new road just won’t do.

It just won’t do at all. 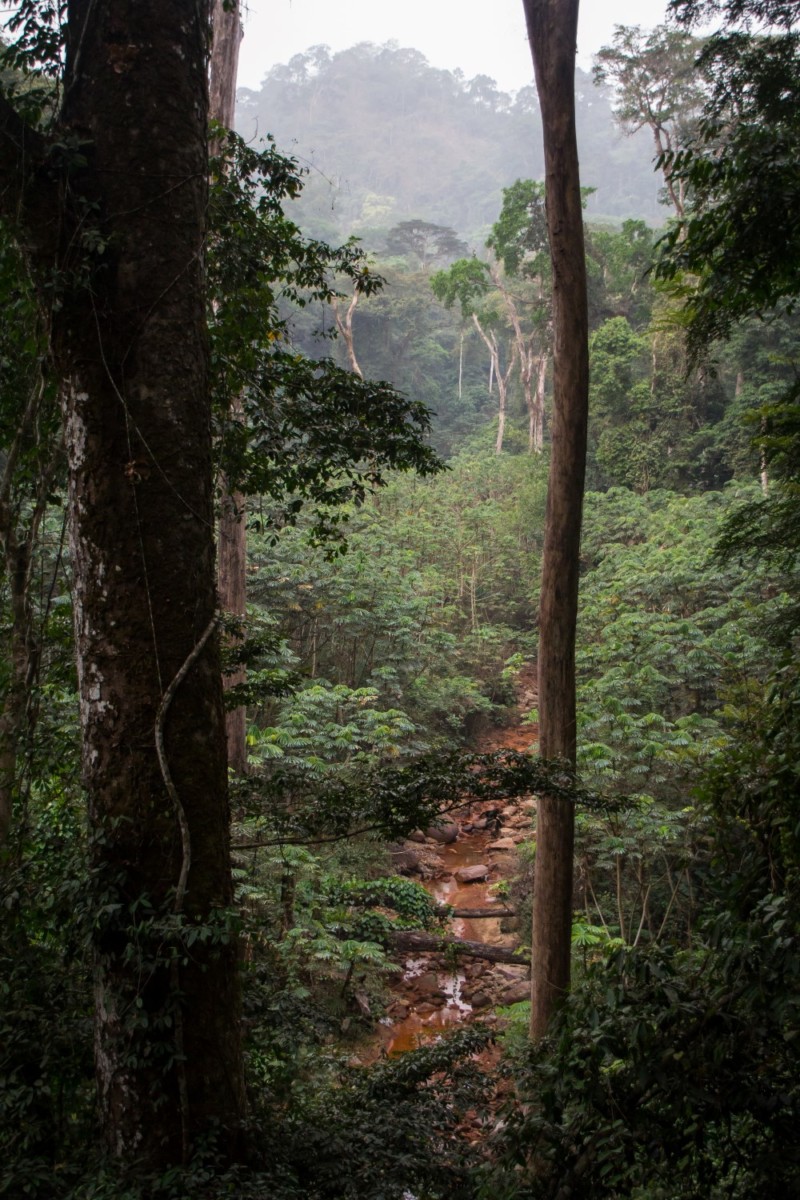 A view through the leafy undergrowth in Nigeria. The rainy season is not called that for nothing.

Despite poring over maps and searching for alternate routes, I found information hard to come by. For years, the Mamfe Road has been the only crossing used by overlanders, and very few people have ventured elsewhere. Northern Nigeria and Cameroon are currently off limits due to Boko Haram activity, so in my search for a more adventurous border crossing, I am mindful of not venturing too far north.

One route I investigate was described in 2008 as a “rough footpath inaccessible to any vehicle”. Tantalisingly, the description also says, “When you reach the top of the escarpment, it seems half of Southern Nigeria is spread out behind you.” All the maps I source – printed and online –show only bits and pieces of this potential route, leaving me a little uncertain. After talking to locals and digging deeper, I start to believe that there is a passable road of sorts, and I quickly become fixated on finding out one way or another. I have come all this way along the Coast of West Africa; it would be a shame to take the easy road now, and forever wonder what I might have found on that jungle track. If I am unable to cross as planned, I will be forced to retrace my steps to Nigeria, where I can research other possibilities and try again.

With the route settled, other questions linger in my mind: Will locals be friendly? Will Boko Haram be in the area? Is my Jeep up to the conditions I might encounter?

There is really only one way to find out for sure.

For safety, I persuade a German couple to come along with me. Daniela and Dietmar Zepf are driving a well-equipped Sportsmobile camper van, and I like the improved chance of success with two vehicles.

It is also comforting to know that if things go really bad, I will not be alone. 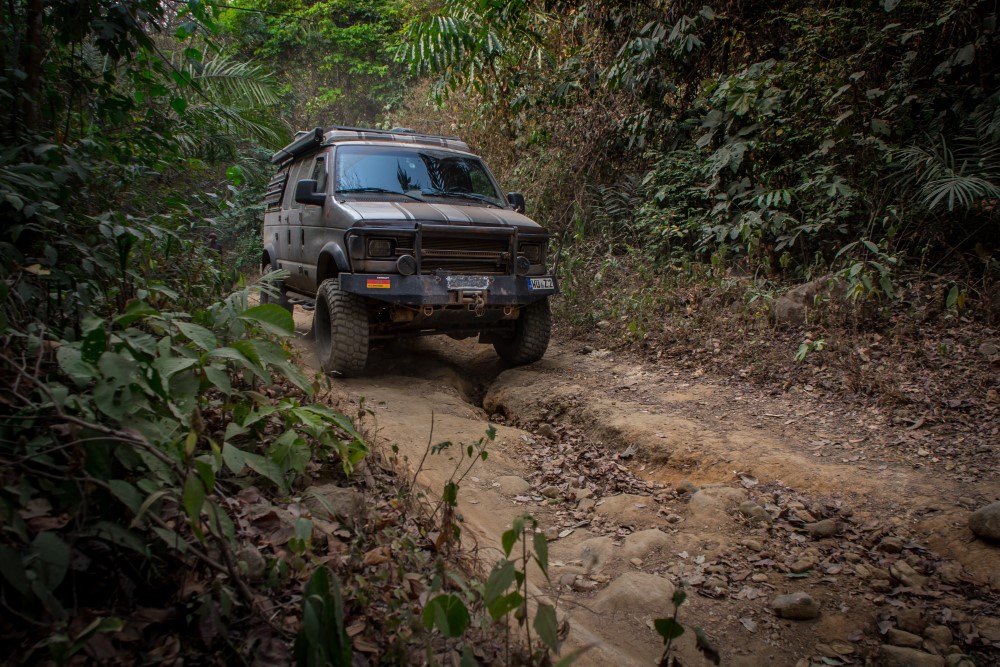 Dietmar’s monster Sportsmobile trundles along a jungle track. Not long after this, he destroyed a shock absorber, which he removed completely.

Bump in the night

I lurch awake to yelling and pounding on my door in the dead of night. We are staying in a hotel in Nigeria, on the assumption that it is safer than wild camping. My mind races.

“They have found us, and they are here to kidnap us,” I think.

Through the darkness, I can see the flimsy desk I put in front of the door bouncing under the sustained blows being delivered. My heart tries desperately to escape from my chest, and I struggle to get it under control. Deep male voices are yelling repeatedly in an unfamiliar language in the corridor. Multiple doors up and down the hallway are under assault.

The vehicles must have been spotted as we drove into town. I start to wonder what they are doing to my Jeep outside in the parking lot. Sitting in the dark, I realise that there is absolutely nothing I can do about it. My safety is much more important than the Jeep, and I fervently hope that my friends have come to the same conclusion and are keeping their door firmly closed and locked.

After very little sleep, I gingerly exit my room at sunrise to pack the Jeep, and am relieved to find Daniela and Dietmar doing the same. We all agree on a fast exit, and just as I climb into the Jeep, a shy-looking young man introduces himself with a warm smile and handshake. Vincent explains that he is with a visiting soccer team, and after a win late yesterday, the team were searching the hotel for people in order to continue the rowdy after-party.

He apologises profusely for the loud night and for scaring us. As we chat over coffee for the next ten minutes, we watch as more and more of the team stumble from the hotel, blurry-eyed and confused. Eventually we relax, and even laugh, as we realise that the whole thing was nothing more than a misunderstanding.

No harm done at all.

Vincent wishes us a safe journey in Nigeria, and the rest of the team gives a thumbs-up as we pull away.

At the only functioning fuel pumps, we fill up every container we can. Petrol and diesel are incredibly cheap in Nigeria, and we want to spend all of our Niara − which are worth virtually nothing outside the country, owing to devaluation of the currency. While I am chatting to the young lady at the pumps, a nondescript man approaches and gently asks to see my passport. The slender young man is wearing blue jeans and a polo shirt, so I am immediately suspicious, and have no intention of handing over my passport to this character. When I ask to see his ID, he simply waves at a nearby pickup truck. The battered white-and-rust Toyota has large block lettering down the side – “Immigration” – and in the back are six men dressed from head to toe in camouflage, each carrying an AK-47.

Good enough for me.

For the rest of Dan’s incredible story, pick up a copy of the July issue of SA4x4 magazine.