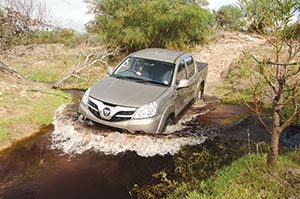 Chinese vehicles are infamous for their copy-cat designs. Take the GWM Steed 5, for example; it’s so similar to the fifth generation Isuzu that the two bakkies could swop doors without fitment issues. By replicating the Isuzu’s design, GWM saved major costs in research and development. In contrast, the Foton Tunland is a new breed of Chinese vehicle; this DC 4×4 bears no resemblance to other bakkies on the market. But, by that token, it shouldn’t come as a surprise that the Tunland’s price is high for a Chinesemade 4×4. At roughly R340 000, the Tunland isn’t exactly a budget buy in the bakkie sector, but it’s still R120k cheaper than most other DC 4x4s. It’s a gallant move from Foton and in many ways a clear message from the Chinese brands; one which says, ‘We’re competitively priced even when we don’t copy you.’ But even given the Tunland’s attractive price and unique design, is it truly a competitive pick-up? And does it have what it takes to challenge the industry’s stalwarts?

INTERIOR
As mentioned before, the Tunland’s cabin bears no similarities to those of other bakkies on the market. And, while the Tunland’s interior won’t win any styling awards, what this cabin lacks in flair, it more than makes up for in simplicity and user-friendliness. The Tunland’s controls are uncluttered, neatly grouped, and impart a general sense of good quality.

What impressed me most about this cabin was its comfortable driving position. This can be attributed to the Tunland’s spacious driver’s seat, steering wheel rake, the width of the door sill (arm rest), and the perfectlypositioned gear lever. However, it should be said that our test vehicle’s cabin had a plastic / gluey smell to it; an odour often associated with Chinese-made vehicles. Plus, one of the window switches had pulled free of the door panel, raising questions about the Tunland’s long-term durability. But, then again, we’ve seen similar examples in other big-name bakkies; so hopefully in the Tunland’s case this was just an isolated incident.

In terms of space, the Tunland offers excellent shoulder and leg room, but people taller than 1.85-metres have limited headroom at the rear. The Tunland also boasts several cup holders and a few storage compartments here and there; and a glove compartment that is a bit small by modern standards…