Home » Eye of the beholder

I don’t like copycats, especially when the copycat is a vehicle mimicking a stable mate; so this review is already off to a dodgy start. 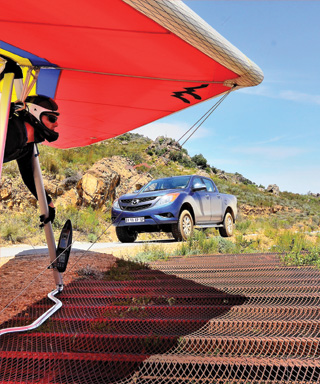 The truth is, we weren’t going to review the BT-50; we thought it would be exactly the same as the Ford Ranger (which we’ve already reviewed in the April ’12 issue), and therefore a waste of time. But, after taking the BT-50 on a quick weekend jaunt, we quickly realised that there are a few differences between these two brands; some are subtle, and others are more in your face.

There’s a lot to be said about presentation. Take food, for example: a delicious-looking meal creates anticipation, excitement and a need to reaffirm what your eyes are telling you. I regularly drool over the Ranger’s good looks; it’s like staring at a large portion of steak – simple, uncomplicated and almost always tasty. Then there’s the BT-50. Whenever I see this pick-up, I feel like a Western tourist in a Chinese food market – confused, a little nauseous, and not terribly hungry. My feelings extend to almost every aspect of the Mazda’s exterior styling, from its oddly-shaped wrap-around taillights, to its stretched-back headlights and Bozo-thegrinning- clown grille. 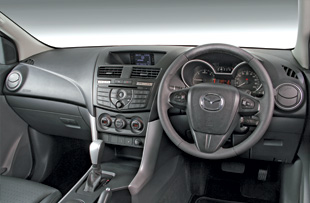 Sure, as this story title makes it clear, looks are subjective, but when we attended the BT-50’s launch late last year, the folks at Mazda went to great lengths to justify the bakkie’s unusual styling. To misquote the bard, methinks the Mazda doth protest too much.

Happily, once inside, you’ll find that just about every aspect of the BT-50’s cabin is identical to the Ranger’s; this includes legroom, headroom, storage space and even the vehicle’s highly effective climate-control system – both the Ranger and the BT-50 boast an excellent air-conditioner system that could chill the toes on a Siberian sasquatch.

If you’re looking to buy a 4×4 double-cab, the BT-50’s engine options are restricted to Ford’s acclaimed five-cylinder 3.2 TDCi engine; the same motor fitted to the Ranger. This incredible oil burner is capable of 470 Nm @ 1 500 rpm and 147 kW @ 3 000 rpm. Although engines like the Nissan’s 2.5 dCi rival the Ford’s TDCi on paper, when it comes to real-life driveability and load-hauling performance, there’s little comparison: the TDCi is superior on all counts. It’s a matter of lowdown torque and the fact that the 3.2 TDCi exhibits almost zero turbo lag. This engine is top of the pops and it deserves all the praise and adulation it’s currently receiving. The BT-50’s 4×4 models are available with either a 6-speed manual or 6-speed automatic. Our test vehicle was fitted with an automatic box, which didn’t do much to impress me. It’s the same gearbox fitted to the Ranger, and in both vehicles I thought the gear changes were a bit erratic. Perhaps it’s the gearbox’s Active Adaptive Shift, which is a feature that allows the transmission to “learn” your driving style.

Ride quality’s a tricky subject. I would’ve assumed that the Ranger and the BT-50 would share the same suspension setup, but I can’t remember the Ford’s ride being quite as firm as the Mazda’s. We asked Mazda if the suspension was different but hadn’t received a reply before publishing this review. Either way, I’m almost certain that these vehicles have different suspension systems; either their spring rates aren’t the same, or their shocks are different. I found the BT-50’s ride very firm, possibly on a par with the Hilux. If the BT-50 and the Ranger do, in fact, have different suspension systems, it would seem a little odd that the BT-50 (a vehicle strongly punted as a leisure / lifestyle bakkie) would have a firmer/harder suspension than the Ranger – a vehicle strongly punted as a workhorse bakkie.

What’s more, we noticed that the BT-50’s firm suspension would often break traction on a badly-corrugated road, even at speeds below 60 km / h. However, it should be said that we had a light load in the back and our tyres were set to 2.0 bar. Naturally, the BT-50 would’ve performed much better on gravel if we’d deflated the tyres and put more weight in the load bin. The rest of the BT-50’s off-road abilities are much like the Ranger’s. The Mazda also boasts a class-leading wading depth (800 mm), OE-fit AT tyres, and clearance angles that’ll see you through most off-road tracks (excluding grade 5 trails). Lastly, just like the Ranger, the BT-50 sports an incredibly high payload capacity (1 092 kg), good fuel economy (9.6 l/100 km @ 120 km/h), a great range (833 kg) and a terrific load-bin volume – several key features that make this an excellent overland vehicle.

Curiously, when we engaged the BT-50’s low-range gearing, the vehicle failed to disarm its traction control (TC) system. This is highly unusual; most 4x4s automatically disengage their TC systems when low-range is selected. It could be that our test unit was faulty, or perhaps things are supposed to be this way. That’s another question we’ve posed to Mazda and hope to receive an answer for. To conclude: my biggest gripe with the BT-50 is its styling. All in all, it’s basically a Ranger, but Mazda has taken one of the strongest draw cards to owning a Ranger (the chance to drive a ballsy-looking pick-up with bundles of road presence) and they’ve Frankensteined its features to create an ugly duckling. Again, this is my own subjective view; but I’ve yet to find one person who likes the BT-50’s looks. Okay, that’s not quite true, my wife is rather fond of it. I’m still trying to figure out what that implies about my looks… 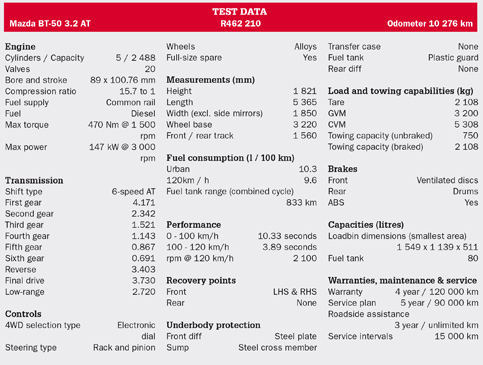