It’s a bitter truth: South Africa’s vehicle market is a tiny speck in the solar system of automotive importance. We’re like Pluto – the world knows we exist, but only as a dot on the outskirts. 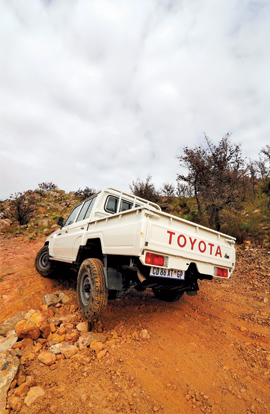 America and Europe, on the other hand, are like Jupiter and Saturn – two planetary giants that control the industry’s orbit.

In fact, a few years ago we heard claims that a large Toyota dealership in Florida sells more vehicles in a month than Toyota SA sells in the same period! And it’s for this very reason that the launch of the LC70 DC is rather special. What was originally planned as a minor spec change for the LC70, ended up as a whole new model in the LC70 range… and we had something to do with it.

Roughly three years ago Toyota Japan’s Chief Engineer paid a visit to SA. While travelling through our country’s farmlands he noticed a number of Land Cruiser DCs – all of which were aftermarket conversions at that point. He was surprised by the demand for this vehicle; and soon afterwards Toyota Japan started asking questions in Australia and the Middle East. Market research revealed that our Ozzie neighbours were just as keen on the concept as we were and a little while later the development of the LC70 DC began.

INTERIOR
You’ve got to sympathise with Toyota HQ; the idea of using a Land Cruiser bakkie as a leisure 4×4 – rather than a Hilux – must seem weird to their marketing gurus. As far as Japan’s concerned, the LC70 is a workhorse pick-up, not a holiday ride. This is an important point to remember when climbing inside the LC70’s paradoxical cabin.

For the most part, the LC70’s interior is starkly utilitarian. Sure, you get things like electric windows, mirrors and aircon, but don’t expect power-adjusted seats, fancy leather upholstery or anything more than a single cup holder.

However, there is one exception to the LC70’s bare-knuckle appearance, and that is the vehicle’s infotainment system. It’s a touchscreen unit that includes satnav, a radio/CD player, USB port, auxiliary jack and a host of other features. It’s the only contemporary item within the Cruiser’s cabin and it looks more out of place than a pork sausage at a bar mitzvah. This infotainment system is a welcome feature, but because it’s the only luxury item in the vehicle, it does draw your attention to the fact that the Cruiser’s interior is pretty outdated.

But there’s a more pressing issue; is the LC70 DC a bona fide 5-seater? Well, despite what the dealers may tell you, it’s not; the 2nd row isn’t wide enough for three ooms; in fact, given the ever increasing size of our offspring, strapping in three kids could even lead to some bother.

What’s more, rear leg room is limited: with our editor (1.85-metres tall) in the driver’s seat, we measured zero knee space for anyone taller that 1.75-metres sitting behind him. On the upside, the LC70 DC has generous headroom space throughout the cabin.

EXTERIOR
Forget sugar coatings; the LC70 is the diabetic’s choice of 4×4 bakkies. I can’t think of another vehicle so void of frills and façades. The LC70 isn’t trying to impress you, it has no hidden agendas – it is what it is. You can take it or leave it. Every line, edge and corner of this Cruiser is plainly sculpted; it’s as if the designer had nothing but a ruler, a pencil, and a debilitating fear of a curved line. Of course, the most significant part of the exterior is its second set of doors and cargo area. The Cruiser’s transformation from a single-cab into a 4-door DC has completely altered the bakkie’s status as a workhorse vehicle. This is mainly due to the DC’s impractical load bay volume; it’s no longer suited to workhorse applications.

From an overlander’s point of view, things aren’t too bad: the Cruiser’s bak is marginally bigger (1 520 mm long and 1 650 mm wide) than most DC’s. But owing to its relatively low bed height (410 mm) and the fact that the spare wheel is mounted inside the cargo area, the LC70’s loadbin has a deceptively small appearance. As a matter of interest, the new Ford Ranger’s loadbin measures 1 549 x 1 139 x 511 mm.

OFF-ROAD
The LC70 can be a really tricky drive once you run out of road. A radical statement, sure, but one that’s inspired by this vehicle’s phenomenal traction abilities and go-anywhere performance.

You see, there’s no stopping the LC70 off-road. With front and rear lockers engaged, this Cruiser will go in whatever direction you point it. Unfortunately, because of its none-too-impressive axle articulation (375 on our RTI ramp), the Cruiser is prone to weight shifting when driving over really big or deep obstacles. In other words: inexperienced drivers may not realise when one (or two) of the Cruiser’s tyres are off the ground. And because the diff-locks continue to push the vehicle forward without faltering, the LC70 can tip over without much warning. In fact, this very scenario was played at the press launch when a journo (presumably someone with limited 4×4 experience) put a Cruiser onto its side.

Granted, it’s not the most spirited diesel around – and therefore not suited to deep sand driving – but this oil burner does a phenomenal job of conquering mountains. Thanks to its lowdown torque, short gearing (specifically first gear), diff-locks, adjustable hand throttle, robust suspension and solid build quality, the LC70 is happiest crawling over rocks. Interestingly, the petrol version doesn’t come fitted with a hand throttle.

I’ve heard many people say that the LC70 is a kidney klapper – that its extra harsh suspension will rock your organs and strain your back. Well, that may be the case in the single-cab model, but I didn’t think the DC’s suspension was that bad on a gravel track. In fact, I’d say it’s even more comfortable than the GWM Steed 5, and also quite possibly the new Mazda BT-50. However, just to be clear, I’m not saying the LC70’s suspension is remarkably smooth; it’s just not as crude as I was expecting it to be. According to Toyota, the DC and Station Wagon models both feature softer suspension compared to the single-cab model. To add to this, Toyota has fitted super spongy seats which do a great job of absorbing the bumps. However, there is a downside to these that we’ll discuss later.

ON-ROAD
Uphill, downhill or on a dead-flat road, the LC70’s diesel engine is barely adequate on the open road, so before you rush out and buy one, do some soul searching and make sure you’re happy driving slowly, taking your time, when doing a long trip.

If you’d rather have some oomph under the pedal, opt for the 4.0-litre V6 petrol model. This is the same motor found in the Hilux, Fortuner and FJ Cruiser models. There is one difference, though; the motor used in the FJ boasts a slightly tweaked engine with more kilowatts. As mentioned before, we tested the 4.2 diesel model, which proved to be surprisingly comfortable in urban surrounds. This is due to the diesel’s low-down torque, smooth manual gear changes and light-footed clutch – three qualities that make the LC70 effortless to drive. What’s more, there’s no need to change gears too often; once you get going you’ll find yourself using only 3rd and 4th gear – fourth for cruising and third for taking corners. The Cruiser’s 5th and final gear is an overdrive ratio, meant mostly for the open road. Both models (petrol and diesel) are fitted with a 5-speed manual gearbox only.

The diesel’s lacklustre performance is mostly evident at the 100 km/h mark and faster. It doesn’t take helluva long to get there – roughly 15.9 seconds – but if you try to push the Cruiser any faster it’s like watching a baobab grow. For example: in 4th gear it takes 8.9 seconds to go from 100 to 120 km/h. That’s nine seconds for a mere 20 km/h increase. If you do the same thing in 5th gear, it takes a jaw-dropping 14.5 seconds. These figures were recorded with no passengers or luggage in the vehicle… and a nearly empty fuel tank. If you were to load this vehicle to its full payload capacity (920 kg), hook up an off-road trailer and drive at Highveld altitude, the bakkie would move slower than the office clock on a Friday afternoon.

Happily, the 4.0-litre petrol model is a completely different animal; it has no qualms about speed and can achieve a top end of 165 km/h. However, I’d have serious reservations about driving this bakkie quickly, as it has the aerodynamic properties of an old tin bathtub. This is one of the reasons why the Cruiser’s NVH levels are so high. What’s more, the LC70’s steering is a bit vague, so you need to constantly correct the vehicle’s direction when driving at speed. This is a tiring trait on long-distance trips as it forces you to concentrate non-stop. Combine this feature with the vehicle’s cabin noise, and there’s no denying the LC70 DC’s heritage – this is a dolled-up farm implement with four doors.

Then there are the seats. As mentioned before, the LC70’s extra spongy seats do a great job of soaking up bumps, but the trouble is that they create a bouncing movement in your body. So much so, that after driving the Cruiser for four hours straight, I got out of the pick-up and continued to feel that motion – very much how it feels when you climb off a boat onto solid ground.

In terms of model changes: the Cruiser’s 90-litre fuel tank was recently increased to 130-litres, and all the models in the range are now fitted with ABS and disc brakes all round. As far as the Cruiser’s elusive TDV8 engine goes, Toyota says it will launch some time this year. What’s more, the V8 turbo-diesel will be an addition to the range and won’t replace the 4.2-litre normally aspirated diesel.

CONCLUSION
An avid Cruiser buff once told me something interesting. He said, “Cruisers are for poor people.” Needless to say, he was quick to elaborate, “Poor people buy Cruisers because they don’t need repairs, are relatively cheap to maintain and they last forever.” He then went on to say that the average Cruiser owner keeps his vehicle for 15 years! It’s an interesting point and in many ways it reflects the conclusion of this road test. In my opinion, the LC70 isn’t a leisure vehicle; it can’t compete with modern-day DCs like the Hilux and Ford Ranger. These bakkies may not be as tough, rugged, or as capable offroad as the LC70, but they’re superior in every other way, including being much nicer to drive!

Why anyone would buy this bakkie rather than a modern DC is beyond me… unless you’re talking longevity. If you want a vehicle that’s barely run in at 100 000 km, there ain’t many 4x4s better than a Cruiser bakkie. In other words, this is the vehicle to buy if you never want to buy another 4×4 ever again. While I’m not convinced of the LC70’s purpose as a leisure tool, I’m absolutely thrilled that Toyota still continues to make a diehard 4×4 with zero gizmos, gadgets or electronic wizardry. However, this could change in the not too distant future.

Many mining companies now insist that their commercial / fleet vehicles carry a Euro NCAP 5 rating. And because Toyota would very much like to tap into this market – locally and abroad – we could soon see some dramatic changes to the LC70 range, even to its iconic styling. This could be the last of the ‘proper’ Cruisers, and that’s a pretty good reason to buy one, in my opinion.