Toyota is known for their over-the-top launch events and this one, to unleash two new special edition Hilux models, was no different. Catching the dreaded redeye flight from Cape Town to Lanseria and on to Kasane in the far north-eastern corner of Botswana, we then picked up our chariots for an epic adventure through Zimbabwe, Zambia and Botswana.

Celebrating five decades at the top of the food chain, Toyota is releasing two very special new models to up the game once again. The Legend 50 replaces all new Raider models at the top end of the Hilux hierarchy, offering improved interior tech, high spec levels and a host of cosmetic changes. The Legend 50 will also be the last in a line of ‘Legend’ models named after their anniversary every five years since the Legend 35.

As Toyota smashes more sales records, selling 4 770 bakkies in June, and a similar number most other months, they have released a new model right at the top of the Hilux pyramid. The GR Sport double cab is a limited run of only 600 units built locally in Prospecton for our market.

Honouring the Dakar-winning Hilux of rally aces Nasser Al-Attiyah and Mathieu Baumel, the GR Sport features several upgrades, inside, out and under the skin. Most noticeably, the suspension has been upgraded with revised damping to reduce roll and improve off-road driving stability at high speeds. To reduce bottoming-out on fast gravel, the front end has received firmer spring rates while wheels have shrunk from standard 18-inch to 17-inch, enabling them to be shod in higher profile Bridgestone all-terrain tyres to gain extra traction and more compliance. The rear spring rates have remained unchanged to maintain an 870kg load capacity. Toyota refused to confirm or deny that future Hiluxes will use a similar suspension setup, though as this setup provides a marked improvement in ride and handling all round, it would make sense. Certainly it should be offered as an option.

Visual upgrades include Gazoo Racing stickers on the flanks, a new honeycomb grille and two-tone paint finished in Arizona Red, Glacier White or Arizona Black in homage to the Gazoo Racing livery as used on Toyota’s Dakar race machines. In addition, GR Sport-branded running boards offer an improved breakover angle compared to the standard side steps.

Inside, the starter button is GR-branded while the seats are now leather-clad (as opposed to standard cloth). GR insignia feature on the headrests and floormats, there are red accents on the dash, and you’ll also notice a plaque behind the gear lever featuring the build number of your vehicle.

Thanks to customer feedback on the terrible touchscreen volume buttons, the new eight-inch touchscreen gets manual knobs for the volume and channel selector and is generally a much better, more responsive unit which also sports sat-nav.

Sampling the GR on the rutted and bruised gravel tracks near Victoria Falls, the vehicle proved to be a marked improvement over the standard Hilux. Back-to-back with the Legend 50, we noted improved stability at high speeds and, most noticeably, improved resistance to the front end bottoming out over ruts.

The regular Hilux is somewhat renowned for its loose rear end on gravel roads, and it’s fair to say the GR is much more planted, though surprisingly no less comfortable.

WHAT IS GAZOO RACING?

Gazoo Racing is Toyota’s motorsport wing. Since 1957 Toyota has been racing in all forms of motorsport from rally to touring cars and even the Dakar. Gazoo recently won the Dakar, the FIA World Rally Championships and the 24 Hours of Le Mans in its 20th attempt. The Toyota Gazoo Racing teams are committed to motorsport using technology and skills learned to improve safety and performance in Toyota’s road cars and bakkies.

Gazoo Racing or GR Sport brings some motorsport lineage to the road with three tiers of trim levels. ‘GR’ represents cosmetic changes while ‘GR Sport’, as we found in the Hilux, represents cosmetic and chassis/suspension tweaks. Gazoo Racing Meister of Nürburgring (GRMN), as recently released in the supercharged Yaris, included cosmetic, chassis and engine upgrades. 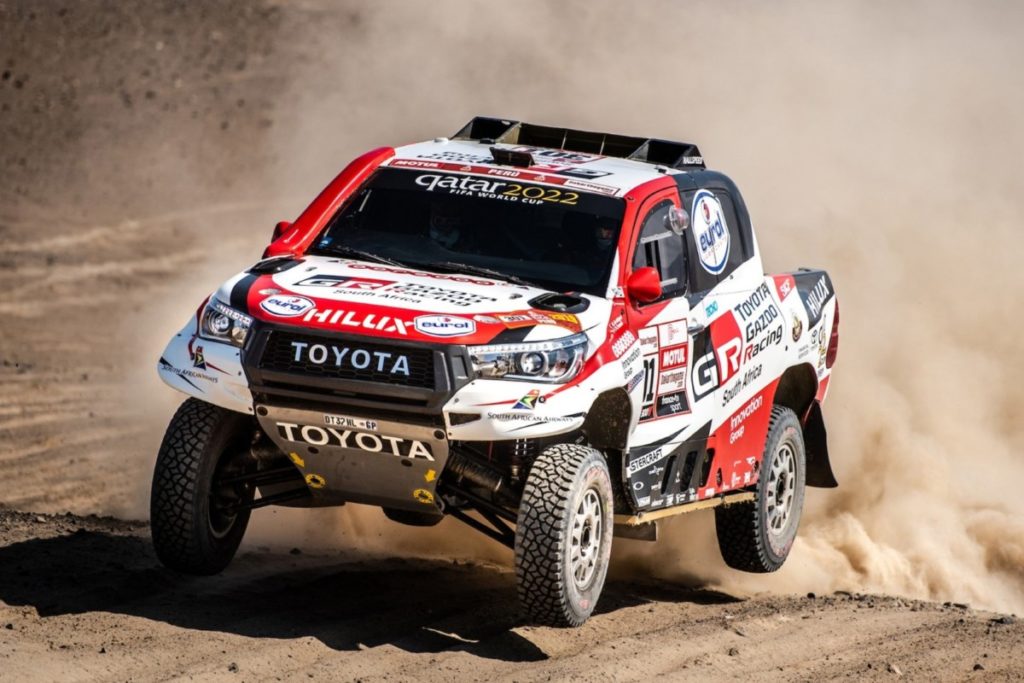 Since 1969 the Hilux has been a South African staple – like Weet-Bix or seven-a-side rugby. Almost every South African respects the Hilux, and most have a story or association with the nameplate, and for this reason it has earned its ‘Legend’ moniker. The Hilux consistently remains SA’s best-selling vehicle, and while the Ford Ranger briefly came close, it didn’t stay ahead of the venerable Hilux for long. Five years ago we went on a ‘Legendary’ road trip to Graaff-Reinet with a Legend 45, and now the Legend 50 is our chariot across Botswana and Zimbabwe.

Replacing the Raider in double-cab, extra-cab and single-cab variants, Legend models are available in raised body 4×2 and 4×4 variants with automatic or manual transmissions. Engine choices include the 2.8 GD-6 motor with 130kW and 420Nm (add 30Nm for the automatic) and the 4.0-litre V6 petrol with 175kW and 376Nm.

Like the GR Sport, the Legend 50 gets a host of exterior updates, though here suited to more subtle taste. All cosmetic, the changes include a new blacked-out grille boasting ‘Legend’ badging, chrome door mirrors, a Legend 50-branded sports bar, blacked-out model-specific 18-inch alloy wheels and plenty of Legend 50 badges inside and out.

As with the GR Sport, the interior has been upgraded with a new 8-inch touchscreen and standard sat nav as well as keyless go.

According to Toyota, the Legend 50 will be the last of the ‘Legend’ Hiluxes, so you may want to get your hands on one now.

WHAT WE GOT UP TO

To showcase the new Hilux we took them on what Toyota dubbed the ‘Legendary Road Trip’. This entailed several hundred kilometres of gravel travel through Zimbabwe and Botswana, as well as a quick trip over the border to Zambia while sampling the best offerings of each location – as any Hilux owner may do. 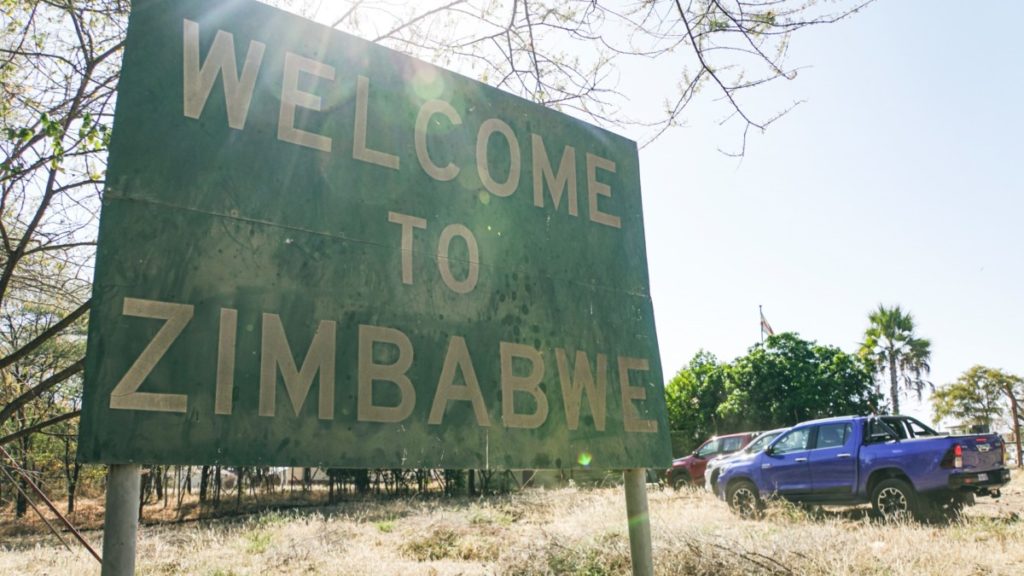 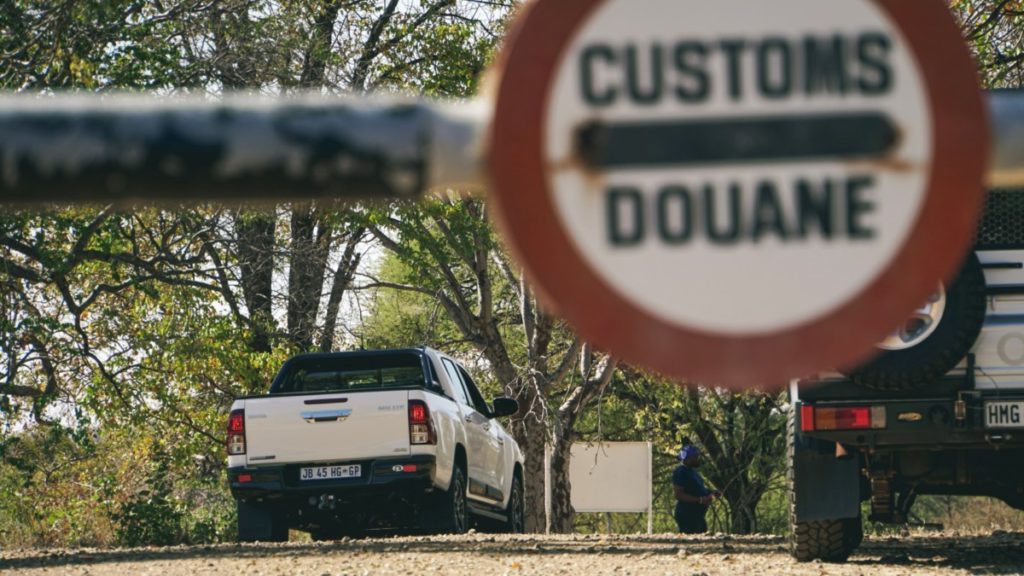 After flying into Kasane in Botswana, which lies literally on the meeting point of the three countries, we stayed in the stunning five-star Chobe Safari Lodge. From there we took a boat tour on the Chobe River. If you’re ever in the area, make a note of this as Botswana’s game is often best experienced from the water. With the sun setting over countless elephants, crocs and the most gargantuan hippos I’ve ever seen, the Day two ordered an early start and, as you can imagine, getting 15 or so vehicles across the border into Zimbabwe isn’t a walk in the park. Despite pre-arrangement with border control, the guard refused to let us in smoothly, signing papers at a snail’s pace between chats to his friends – some lubricating currency was surely required. Once in Zim, we properly put the Hiluxes to the test. 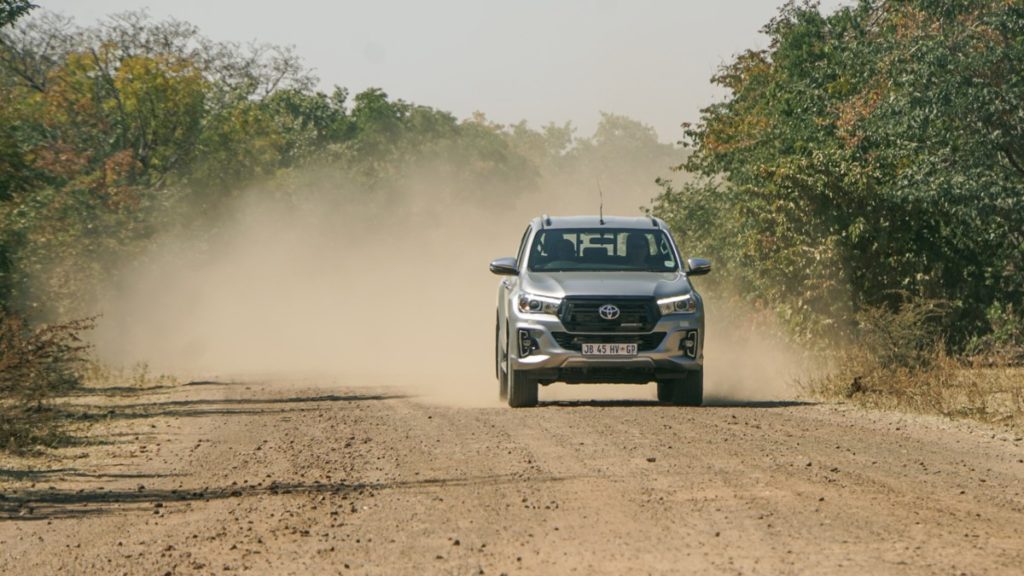 Launch routes are usually designed to showcase a vehicle’s strongest suits, and fast, corrugated, churned-up gravel, with plenty of rippled corners, has not always been where the Hilux shines brightest. Its tough 4×4 systems, drivetrain and reliable longevity have normally been the trump cards. Suffice to say that has changed a bit: we are glad to report the new GR handles impeccably and is an absolute blast to drive at pace. 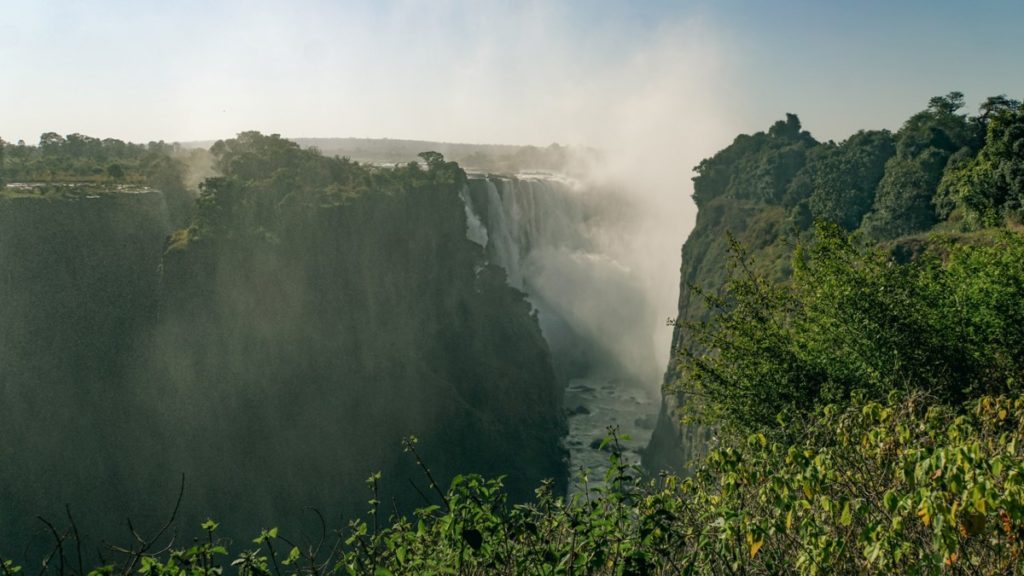 Having thoroughly enjoyed our blitz through the woods, we arrived at the prestigious Victoria Falls Hotel. Built in 1904, the hotel overlooks the roaring falls and is rich in colonial history. No wonder it carries an air of old England about it. Just a kilometre or two from the hotel is the Zambian border control post and one of the highest road bridges in the world.

We crossed it to get into Zambia to reach our dinner venue, and then back again with the full passport stamping rigmarole, albeit on a stunning steam train built in 1922 – harking back to the days of luxury rail travel. Our train ride took us into the adjacent Big Five National Park. I was ecstatic to be allowed into the engine room and then permitted to pull the steam horn like a crazed eight-year-old. 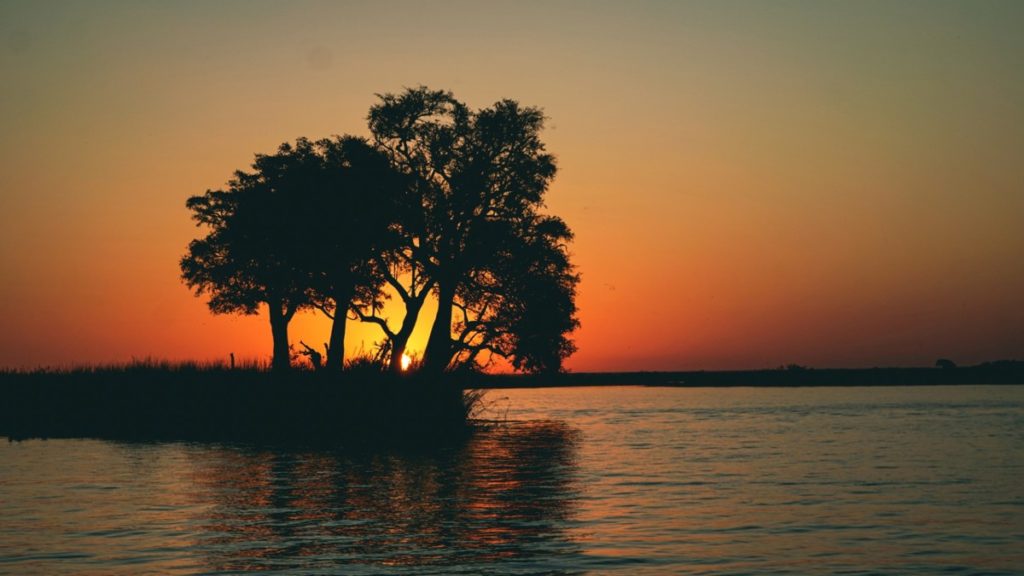 It’s always sad to see a trip come to an end – especially such a short and sweet one – but after having visited the falls one last time, and before flying back home from Victoria Falls Airport, we headed off on some more gravel through tiny Zimbabwean villages and subsistence farms. With the adoption of the rapidly devaluing Zim Dollar as official currency, the people are really struggling as businesses shut down due to the value of their currency being uncertain. Many businesses still only accept Rand or USD, despite it now being illegal to do so.

Our trip proved that, despite being around for 50 years, the Hilux is still a force to be reckoned with. Its progress has been evolutionary rather than revolutionary, but it remains the top dog – a Legendary achievement. We will be conducting a more in-depth test of the GR Sport as it becomes available.

GR SPORT – Only one model