Volkswagen Commercial Vehicles has introduced its completely new generation, Amarok pick-up. The newcomer not only boasts a meaner, bulkier look, but also has both on- and off-road capabilities.

The all-new Volkswagen Amarok was designed and conceived in Germany and Australia, however, the V6 beast was built in South Africa, with an aim for it to take first place in the pick-up B segment.

Volkswagen Commercial Vehicles confirmed that the new pick-up has excellent specifications, a wider array of driver-assist features as well as an expanded range of driver systems than the previous model. 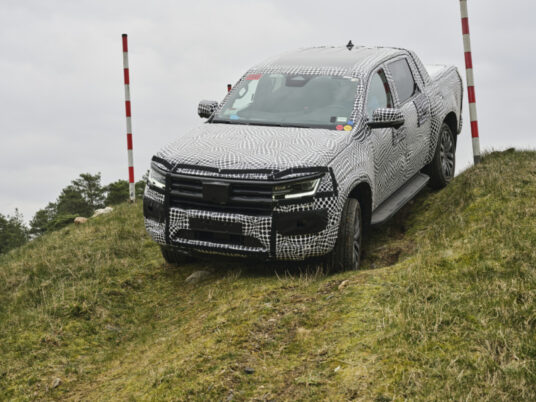 The design of the exterior is completely mesmerising. The model is at least 5 350 mm in length and is 100 mm longer than the previous model. Its wheelbase has increased in length by 175 mm – resulting in more space in the double-cab variant.

Its payload has also increased to 1.2 tonnes, with a maximum towing capacity of 3.5 tonnes now possible across more engine/gearbox variants. As the wheelbase of the new Amarok is growing more than its total length, its bodywork overhangs are getting smaller, it has a greater fording depth to drive through waters which play a great role in its off-road capabilities. 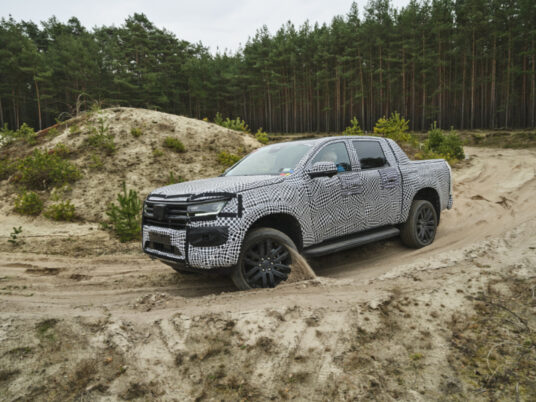 Depending on the engine/gearbox variant and of course, the market, there will be one petrol and four different diesel variants with four to six cylinders with a cubic capacity of 2.0 to 3.0-litres. The pick-up can be ordered as rear-wheel-drive, or on-demand all-wheel-drive.

As mentioned before, the new Amarok has a wider array of driver-assist features as well as an expanded range of driver systems. It has preconfigured driving modes with multiple levels to assist the driver, including in non-everyday situations. Its safety has been enhanced by more than 30 driver assist systems, over 20 of which are all-new to the Amarok. 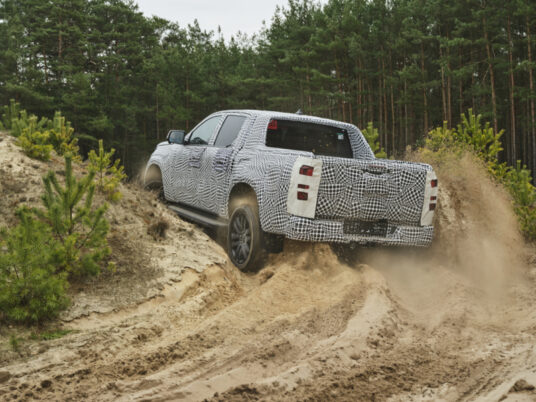 Although the exterior boasts a striking camouflage design, Volkswagen claims that in the future, the pick-up’s exterior will present itself in a powerful, charismatic form.

Its all-new front end has already created a statement for itself with its straight and upright bonnet, the horizontal radiator grille crossbars, and narrow LED headlights, which are standard on all variants. IQ.Light – LED matrix headlights are optional.

It has half-round wheel arches which form a straight rather than a circular line. The wings above its 21-inch alloy wheels and all-terrain tyres give the model a much more powerful look.

The rear has a wide tailgate that is framed by standard LED rear lights with the word ‘Amarok’ embossed across the entire tailgate. Like its previous predecessor, the new Amarok has a sufficient amount of space on the cargo bed between the wheel arches. 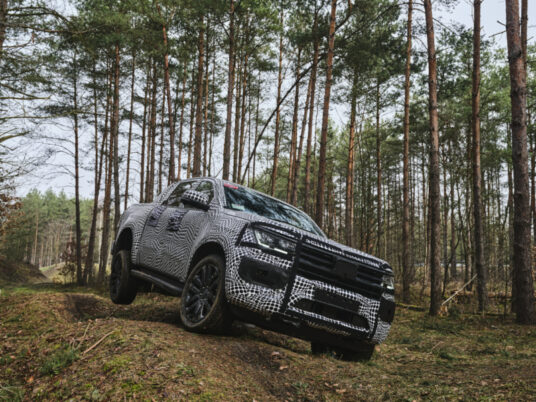 The new cabin has intuitive controls, a digital cockpit and a tablet-style infotainment display. Further contributing to this as options are an exclusive sound system and elegant leather-look surfaces on its instrument panel and door panels with distinctive decorative stitching.

It gives all passengers that customary Volkswagen comfort. The driver and front passenger seats are wide and can optionally be configured with electric, 10-way adjustment, while the rear offers enough space for three adult passengers to sit comfortably and enjoy the journey ahead. 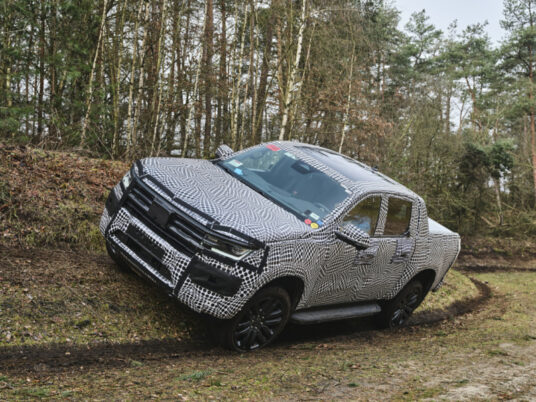 The new Amarok will be offered in five trim versions. The entry-level version is the ‘Amarok’, followed by the ‘Life’ and ‘Style’. The top of the range versions will be known as the ‘PanAmericana’ (off-road variant) and the ‘Aventura’ (on-road character).

To date, over 830 000 units have been sold in Europe, South America, South Africa and Oceania. The pick-up is set to launch at the end of 2022 in the first few countries with four doors (DoubleCab), and in some individual markets, two-door (SingleCab).