The newly-launched Ranger Stormtrak has made its debut in South Africa this month. Based on the luxuriously appointed Wildtrak, the Stormtrak is poised to continue the success of Ford’s popular recent limited-edition model, the Ranger Thunder. “When it was launched in 2020, the Ranger Thunder added distinctive styling and enhanced functionality to the already trendy and popular Ranger Wildtrak on which it was based,” says Doreen Mashinini, General Manager for Marketing at Ford South Africa.  “The Thunder proved itself a tremendous success surpassing all expectations with a sales tally of well over 2 000 units during its 12-month production run,” she says. 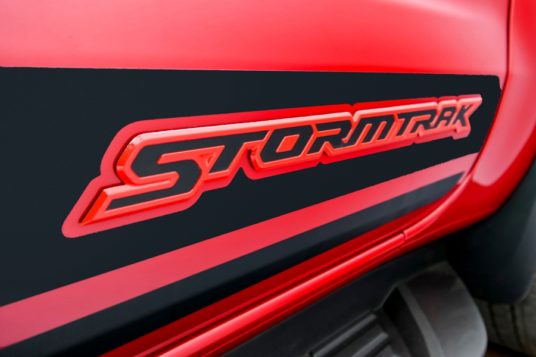 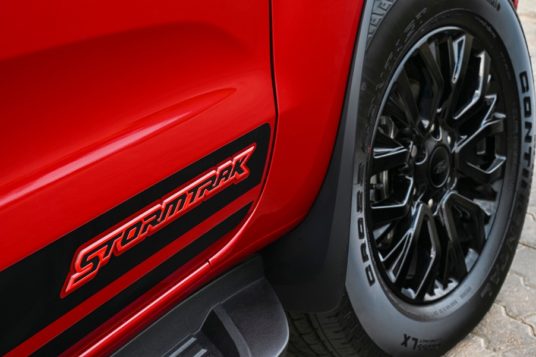 Three-dimensional Stormtrak logos on the lower sections of the front doors, as well as on the rear tailgate identify the newcomer, along with an attention-grabbing model specific Lucid Red paint colour. The Stormtrak can also be had in Sea Grey, Frozen White and Blue Lightning, all formulated to appeal to the varied personalities of Ranger customers. The styling upgrades to the Stormtrak are matched with carefully considered convenience features to aid day-to-day practicality, including a Power Roller Shutter for the rear load compartment, which allows a customer to electronically open or close the protective shutter over the loadbox and provides a convenient method to securely stow cargo out of sight.

Compared to the manual roller shutter, which can be locked only in specific predetermined positions, the intelligent Power Roller Shutter can be securely locked in any position and has also been designed with an anti-pinch feature to prevent injury or damage when contact is made with an object. Bespoke buttons on the key fob, instrument panel and inside the load box add to the overall convenience of the system, complemented by the tailgate locking mechanism being integrated into the vehicle’s central locking system.

Adding further versatility is the adjustable bed divider kit that makes it easy for the owner to compartmentalise the cargo area according to the size of the items being carried – thus preventing goods from shifting around when driving. A drop-in bedliner provides a useful 12-volt socket for powering accessories such as a camping fridge. Inside the cabin you are greeted with luxury and attention to detail – including illuminated front scuff plates. This theme is continued on the premium leather seats replete with striking red stitching, as well as the Stormtrak logo taking pride of place on the front seat backrests. Red stitching is used throughout the leather-trimmed cabin, including on the soft-touch dashboard upper, steering wheel and gear lever, further enhancing the sporty ambience. 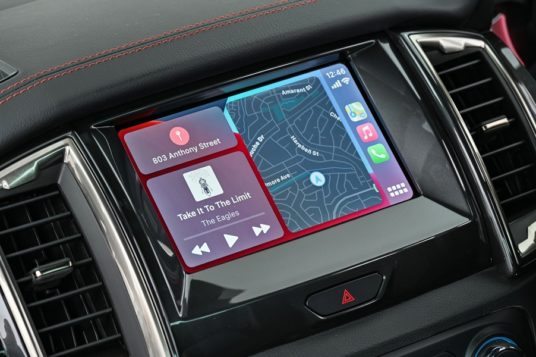 As with the Ranger Wildtrak, the premium level of standard features in the Stormtrak is exceptional, including the SYNC®3 infotainment system with embedded navigation, Apple CarPlay and Android Auto, as well as a nifty USB charging port located in the rearview mirror makes for easy fitment of a dash cam. 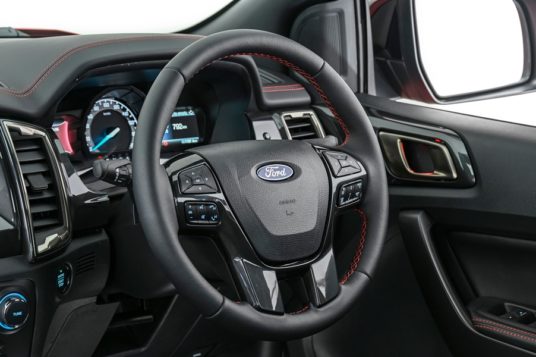 The Stormtrak is also equipped with Ford’s innovative FordPass functionality that allows owners to remotely access numerous vehicle features from their phone – such as remote and scheduled starts to either cool or heat the cabin. Through the FordPass app’s Vehicle Status feature owners can also check their vehicle’s key variables including fuel level, oil life status, tyre pressures (on models fitted with a Tyre Pressure Monitoring System) and mileage through the convenience of their smartphone. Other useful features include a vehicle locator courtesy of a map and location tracker in the FordPass app, Vehicle Health Alerts, which can be sent directly to a smart device pre-empting service needs, and Roadside Assistance, allowing customers instant access to Ford’s 24-hour emergency Roadside Assistance which is valid for a period of three years/unlimited distance. 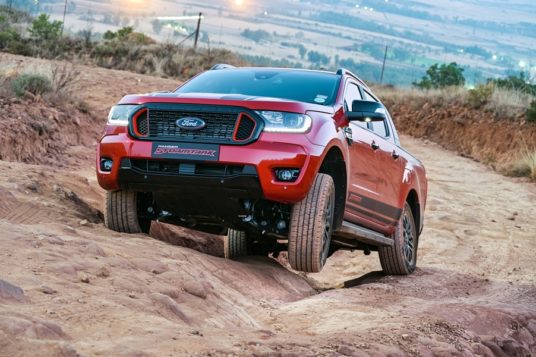 As standard is an extensive list of innovative active and passive safety systems and driver aids, such as Adaptive Cruise Control (ACC) with Forward Collision Alert, Autonomous Emergency Braking (AEB), Lane Keeping Alert and Lane Keeping Aid, and Driver Alert System. Safety is further aided by the fitment of LED headlamps as standard for improved safety when driving at night. Daytime visibility is also improved with the inclusion of the distinctive LED daytime running lights. 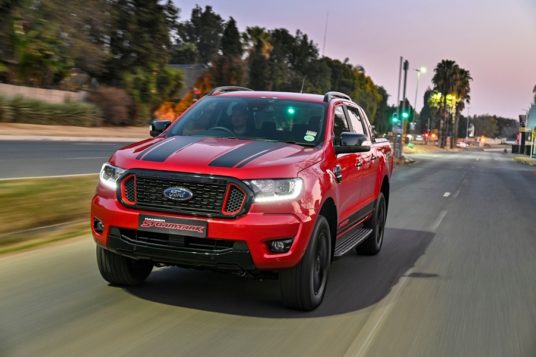 The new Stormtrak further inherits Ford’s innovative Semi-Automatic Parallel Park Assist (SAPPA), which has been carried over from Ford’s range-topping models, including the Ranger Wildtrak and Everest Limited sport utility vehicle (SUV). The system takes the hassle out of parallel parking manoeuvres by using ultrasonic sensors on the front and rear bumpers that search for parking spaces that are big enough to park the vehicle and alerts the driver when a suitable spot is found. 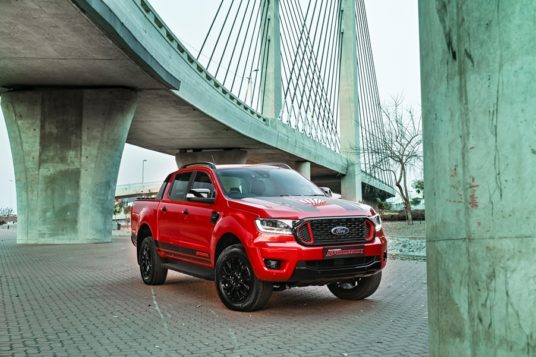 The system then steers the vehicle into the slot using the Ranger’s electric power-assisted steering (EPAS) and sensors. All the driver needs do is operate the accelerator and brake, and select the appropriate gear as prompted by Park Assist. 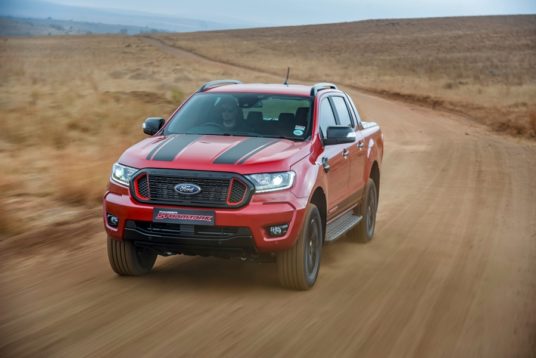 Further convenience is afforded by Ford’s EZ lift tailgate, which makes accessing the Stormtrak’s load bin a cinch thanks to the incorporated torsion rod that reduces the initial lift force required to raise the tailgate by about 70%. 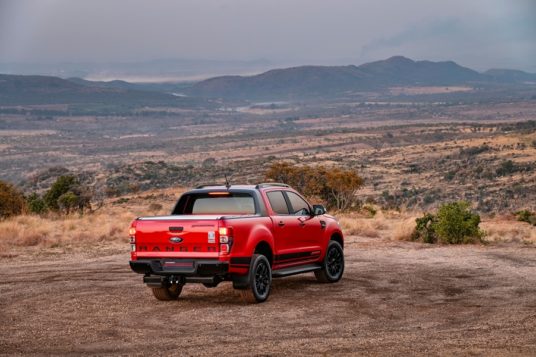 The Ranger Stormtrak is powered by Ford’s 2.0-litre Bi-Turbo engine which produces 157kW and 500Nm. It is paired with an advanced 10-speed automatic transmission that delivers seamless shifts matched to responsive performance and impressive fuel economy. The Ranger’s towing capacity of 3 500kg remains unchanged, along with the 800mm water wading depth and 230mm ground clearance. 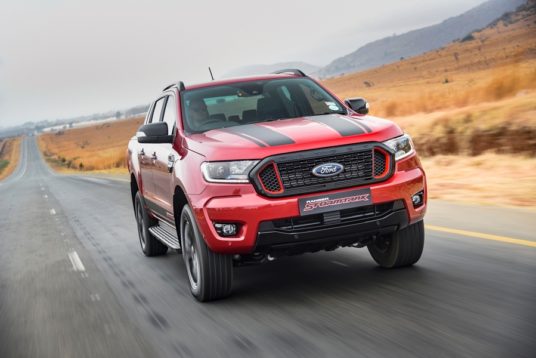 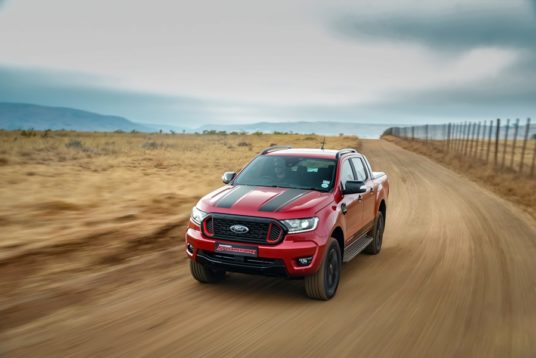 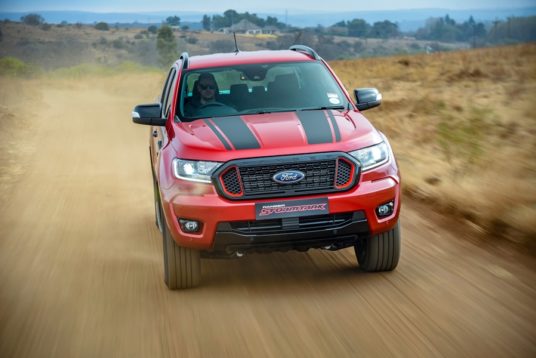 Tale of the tape

The Stormtrak is quite a chunk more expensive that the Wildtrak to the tune of R40 000 though it does offer added features, finishings and accessories. Are these enhancements worth the increase in pricing? Well, the Stormtrak is wedged firmly between the cheaper Wildtrak and the more expensive and capable Ranger Raptor. We’ll leave the choice up to you. Ford has certainly seen a turnaround in their fortunes over the last few years with aesthetically pleasing vehicles manufactured to high standards. The Stormtrak will no doubt find its niche, even positioned close to a duo of rivals from the same stable. 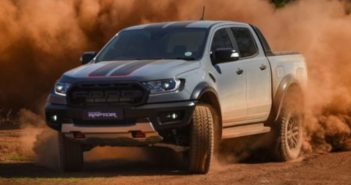 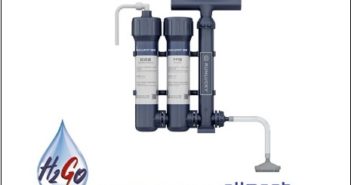