Words and pictures by Eef Lenaerts.

Lying 100 m below sea level, with an average temperature of 34.4°C and with an air temperature record of 64.4°C, the Danakil Depression is about the hottest, most inhospitable place on earth.

The Irta’ale Vulcane (613 m) has been in a state of continuous eruption since 1967, and its small southerly crater contains one of the few permanent lava lakes on the planet. In this area, you can also visit Dallol, the lowest place in Africa (-166 m), and a sulphur lake which is officially the hottest place on earth, with a year-round temperature of 34.4°C. 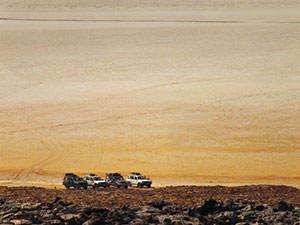 Reading this, we thought, ‘Hell, yeah; let’s go!’ We weren’t sure whether our ’00 Cruiser Colorado was as keen, but we took her anyway. We also decided to ignore the fact that, in 2012, five tourists had been killed and several wounded during a kidnap in the area.

We’d been in Ethiopia for three weeks when our Cruiser developed a problem with all the dust and the high mountains, and started to overheat; we had her radiator taken out and flushed, and this seemed to solve the problem. We joined a convoy of three vehicles from a travel agency. On our arrival at the starting point, the guide took one look at our Toyota and pronounced it too low to do the trip. Well, that worried us a bit, but we decided to push ahead regardless – and realised very soon that although our vehicle was possibly a bit lower than the other cars, it was definitely in better shape!

On the first day, we drove for four hours to the first overnight stop. The route began with a sandy road – not great for us, as we were driving with open windows because our aircon had broken – but then slowly changed to a rocky road. On our way, we saw landscapes of eye-catching colours as well as many long camel caravans on their way to the salt mine. Driving next to these huge animals was sometimes a bit scary, as they weren’t used to cars and some of them freaked out; the one thing we didn’t need was a camel’s foot breaking a window!

The second day would normally have seen us driving to the volcano, but, because of rains in that region, we had to wait for confirmation that the route was driveable. So we changed our plans and pushed on to the sulphur lake instead. We drove on a 2.5 m-wide rocky road; on both sides the landscape changed from rocks to salt water. After a few more kilometres, the rocky road changed to a strange brownish substance – we were driving on salt!