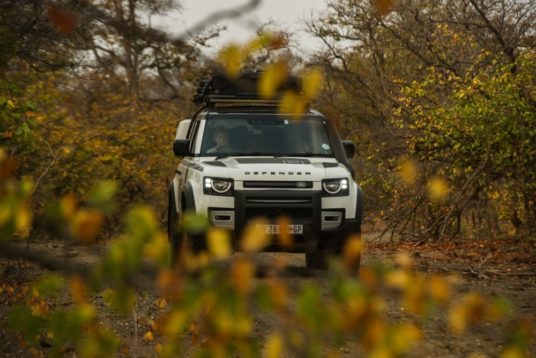 The trip was envisioned by global Land Rover ambassadors Kingsley and Ross Holgate as a continuation of their efforts to deliver around 450,000 meals to rural communities bordering wildlife parks in Kwa Zulu Natal, Mpumalanga and Limpopo during the hard months of the pandemic when a lack of tourism had a devastating impact on jobs and income. Mzansi Edge is now assisting those in need with meals, masks, sanitising soap and digital thermometers on a much broader scale around the perimeter of the country.

The 70-day, 10,000km journey has now entered the Western Cape. Expedition Team Leader Ross Holgate said: “We’ve crossed some important milestones on our first-ever South Africa-only expedition, and after travelling in an anti-clockwise direction from our home in Zinkwazi, following the borders of Mozambique, Eswatini, Zimbabwe and Botswana, we reached Union’s End and the SABONA beacon (standing for South Africa, Botswana and Namibia).”

Mzansi Edge also represents the first long-distance test of the new Land Rover Defender, with a Defender 110 P400 leading a host of previous generation models along the expedition route. The Holgate Foundation’s Defender is fitted with an Explorer Pack featuring a raised air intake, lockable side gear carrier, an expedition roof rack and underbody protection among others. The Defender P400 is powered by a 3.0-litre straight-six mild hybrid (MHEV) drivetrain with 294kW – making it the first petrol, and first electrified expedition vehicle in the Holgate fleet.
Kingsley Holgate said: “From the rocky, boulder-strewn Lubombo Mountain gullies, to the high dunes and deep, soft sand of the Kalahari, the new Defender has conquered everything in its path. We’ve crossed countless rivers and covered seemingly endless kilometres of bone-shaking corrugated gravel roads, yet we look forward to the second half of the Mzansi Edge Expedition and making a difference to the lives of thousands along the way.

#TeamDefender
New Defender is built for adventurous hearts and curious minds, for those who know the value of community and strive to make a difference. These are all contributing factors to the #TeamDefender manifesto, which in short, means being capable of great things and helping those around us.
The ethos fits the Holgate Foundation’s mission statement of improving and saving lives though adventure perfectly. Follow the Holgates along the Mzansi Edge journey on social media using the #TeamDefender hashtag. Regular updates will be shared by the expedition team and Land Rover South Africa .