According to this year’s contestants, the Defender Trophy wasn’t quite as tough as last year’s event, but as Grant Spolander discovered, there was still a healthy dose of tyre-tearing, paint-scratching action.

I almost forget to move my elbow as the thorn-clad bush scrapes along our Defender’s flank. The dense green growth parts to reveal a multi-coloured serpent of some 30 Defenders snaking down a grassy embankment in front of us.
I quickly reach for my camera. In the distance I hear the contestants cheer as the fi rst Defender plunges bonnet-deep into the Mutale River. The Landy roars with low-range fervour and the exhaust spits and splutters through the murky waters.
I hate the first day of a travel assignment. My stress levels are so high I feel like a stock broker about to gamble his kid’s varsity funds on a short sell. As a photojournalist the quality of your photographs is oft en determined by the pace of the first day, and if you haven’t fi lled at least one memory card by nightfall there’s a good chance you may be short of pix by the end of a four-day trip.

I’ve got nothing to worry about this time, we’re just a few hours into the 2011 Land Rover Centurion Defender Trophy and the action’s already gone postal. My camera’s chewing through its second memory card and I’m happier than Dean Martin in a liquor outlet. Earlier that week contestants were given coordinates for the starting point of the 2011 Defender Trophy. On 16 February our GPS directed us to a large baobab tree somewhere in the Limpopo province.
Last year, the event was held in Swaziland where my colleague, Patrick Cruywagen, said the trophy had peaked in intensity and could not be beat – thanks mainly to Diesel Dog, a badly washed away mountain path which took the contestants a full night to winch, dig and road-build their way through. In fact, the track was so challenging and dangerous that the event’s organisers decided to rethink their safety policies for future trophies. For this reason, participants had to complete a mandatory Land Rover Experience training course before attending this year’s event.
This was my first Defender Trophy so I had no expectations and couldn’t decide if I liked the idea that the organisers were so secretive, revealing as little detail as possible before each activity.
Joining the convoy in a press vehicle meant I wasn’t taking part in the trophy itself, but quite oft en the only way to follow the participants is to follow in their footsteps.
Down at the river crossing the current’s so strong I find it hard to stand in the near waist-deep water; my grip tightens on my camera. Th e queue of Defenders stretches back as far as I can see; the next vehicle waits its turn to tackle the dangerous water hazard followed by a muddy ascent up the river bank.
Eventually, it’s our turn to drive through the river so I climb back into our stock-standard Defender. The vehicle dives deep but manages to shake free as the river streams from the bonnet. We’re about halfway when water swamps through the doors, soaking my camera bag and washing the sand from my feet. Just before we reach the other side the Defender takes another dip into an unseen gully, calling for extra revs to pull us through. We hit dry land and the Landy’s traction control hauls us to safety. One obstacle down and heaven only knows how many more to go.
For the rest of the day we explore much of the surrounding area and I later discover that we’re in the Makuya Nature Reserve, west of the Kruger National Park. Th e area’s also known as Venda, translated to “Land of Legends” by the local tribe.
We arrive at our riverside camp late that evening; the last of the convoy pitches their tents at around midnight. The next day’s activities are held close to camp, off ering spectators easy access to all the action. 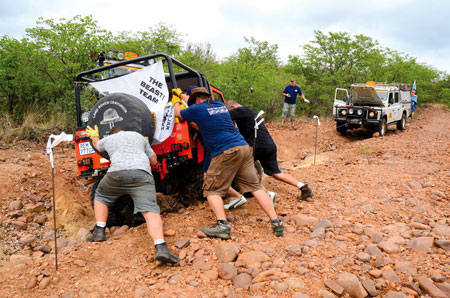 Unlike last year’s Defender Trophy where the more points you had the better, this year’s event saw each team starting with zero points. The moment a team rolled backwards or drove over a demarcated area, points were added to their score sheet. So At the winching challenge, teams of three vehicles have to pull a nominated vehicle through a 90º turn and over a rocky axle-twister. To make things more challenging, the recovered vehicle has to be pulled through the obstacle in one forward motion and can only assist in the recovery by means of steering or applying the brakes.
I watch several teams complete the obstacle, marvelling at the diverse methodology of each – some use two winches while others use one, some use a tree as an anchor point while others use a Defender. Either way, the simultaneous complexity and simplicity of each recovery made me realise an important off -road fact: you’ve always got multiple options at your disposal, you just gotta take the time to see them.
At the bridge challenge, contestants need to build a log bridge in order to drive through a steeply-angled ravine. Again, the applied techniques are completely unalike; some construct a conventional twin-track bridge using logs and ratchet straps, while others simply pile the logs horizontally, enough to fi ll the ravine and reduce the need for excellent clearance angles. 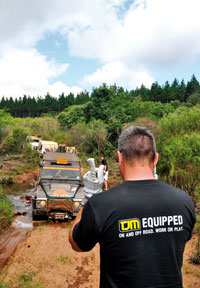 We depart in convoy early the next morning to explore historical parts of Venda. Th is makes me consider the success of the Defender Trophy and why it’s been so popular for the last eight years.
The answer is exploration. Unlike many other 4×4 events the Defender Trophy doesn’t simply focus on the abilities of the vehicles and drivers. Each year the organisers research, investigate and carefully lay out a route that’s not just challenging for the vehicles but also scenically beautiful and worthy of exploration for the competitors. Following the guidance of Johan Klopper – an expert field guide in these parts – we abruptly turn off the freeway and head straight into the bush. The trail we’re on looks more like a footpath than a tweespoor road. A few grazing cows shuffl e to the side as we tear our way through more thorn-covered bushes.
The path remains much the same for a couple of hours, and I question Johan about the authenticity of the path and whether it’s legal to drive. Johan tells me that in ‘94 the route was part of the fi rst guided 4×4 trail in South Africa; it isn’t a road as such but rather a demarcated path called the “yellow line”. Apparently, along with a similar track called the “red line”, both paths act as a quarantine area in the event of a foot-and-mouth disease outbreak. The route is seldom used by vehicles, which is why it’s so overgrown, but it’s perfectly legal to drive on. In fact, our convoy of 33 Defenders helps to clear the path for future use.
Eventually, the narrow track spills onto a smoothly-paved gravel road where participants are told to prep for lunch. The day before, each vehicle was given one egg, one tomato, one onion, two dried mopani worms, a piece of tinfoil and a single match head without the wooden bit. Contestants are then given 30 minutes to make a fire and cook the abovementioned ingredients. Again, the creativity here is so unique and varied it makes me question what else can be done with so few ingredients. 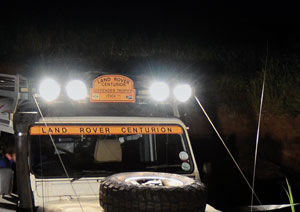 After lunch we hop back on the yellow line and continue south until the trail broadens and becomes far more geologically abrasive. Gradually we ascend the jagged Soutpansberg mountain and it doesn’t take long before I hear a psssssssssst sound coming from my back left tyre.
Upon closer inspection I notice severe sidewall damage to the tyre’s inside track. There’s no scuff or abrasion marks to be seen, suggesting a clean cut by a very sharp stone. I make preparations to change the tyre, but before I get started team ‘Bairy Hollocks’ has sprung from their vehicle wearing work gloves. In no time at all our spare wheel’s fitted and the damaged tyre is back on the tailgate. It’s little surprise that the team mates of Bairy Hollocks, Warren Vos and Peter Healey, later claim the Team Spirit Award.
It’s nightfall again when we arrive at our second camp (Mangwele); the drive in is strictly for 4x4s as the road’s full of rocks and axle-twisters and is dangerously narrow at times. In the dark of the night I can’t see much of the campsite but I hear a waterfall close by and there’s ample grass for our convoy to make camp.
The following morning we follow coordinates to the Holy Forest; it’s a sacred place for the Venda people so we show our respect and avoid stopping in the forest. From here our convoy heads to the Nwanedi reserve, where a mining quarry awaits.
The quarry ain’t much to look at but there’s plenty of mud to vie for our attention. Each vehicle is given a chance to drive through the clay-like goo, following a route that requires some tight manoeuvres.
For the first-time since the start of the trophy, contestants are able to watch and learn from one another’s mistakes. Remarkably, despite the fact that they’re in it to win it, teams willingly share advice with one another, a factor that undoubtedly helps a select few conquers the mud.
That evening, at the prize giving, Kingsley Holgate makes a surprise visit and shares some of his own Defender adventures. He emphasises something many of us ignore: “Never reschedule a travel adventure because you’re waiting to buy better tyres, a new bumper, a bigger winch…” I contemplate the Land Rover phrase, “One life, live it”, and suddenly feel envious of all Defender owners, not just because it’s a great overland vehicle but for the bond that binds these like-minded blokes – they’re always keen to lend a hand, have a jol and give a wave in passing.