It was most likely beer that fuelled the first well-publicised trans-Africa expedition, as the first challenge to race across the African continent was prompted by a round of bar-talk between two competing universities.

Undertaken by Oxford and Cambridge universities during their summer holidays of 1954, this journey covered over 40 000 kilometres. Two teams of three men from their respective universities were to drive 86-inch Series One Station Wagons through Egypt and the Sahara Desert, through Ethiopia and on toward Cape Town, then all the way back up to London again.

The ego match between these two Universities had its origin in a bet made by David Waters and Adrian Cowell (who planned the expedition but couldn’t take part) in a Hong Kong bar. The two
teams from each university obtained sponsorship, which meant that the object of the expedition became one of testing equipment for 50 British companies, and to collect information on potential routes for the explorers’ clubs of each university.

Despite running over allotted time by two months, the expedition was regarded as a success and prompted the next expedition on this list – London to Singapore. An unfinished book on the
expedition has been mentioned, but has yet to be published.

Before 1955, others had tried and failed; nobody had yet completed such a journey. For 5000km, there were “just too many rivers and too few roads” for the six undergrad students who crossed the jungle-clad mountains of Assam as they headed through northern Burma, Thailand and Malaysia.

Having blagged their way into getting two brand-new Land Rovers donated by Rover, plus a TV-series deal supported by the BBC and endorsed by David Attenborough, they even got an advance from a publisher on a book to be written upon the journey’s completion. So successful was the haggling that 80 sponsors eventually signed deals with the university team.

Almost 20 000km and seven months later, two beaten Land Rovers rolled into Singapore amidst much fanfare. Today, the bestselling First Overland book by Tim Slessor can be yours, republished with an introduction by Attenborough himself. Watch the documentary here:

It had long been an American dream to have a highway connect the Polar Circle in Alaska to the Polar Circle in Chile, but it was thought impossible for any vehicle to “drive” through the incredibly dense vegetation, steep hills and swamps that made up the 300 miles of Darien jungle that lies just south of the Panama Canal.

Unperturbed by the danger that faced them, Richard Bevir (UK) and his friend Terrence Whitfield (Australia), planned to span the gap between Toronto in Canada and Chepo in Panama in
the only vehicle which they believed could survive the journey – the Land-Rover 88-inch Station Wagon.

The Pan American Highway Congress’ Sub-Committee, only too pleased with the group’s reckless enthusiasm, sponsored the expedition with an ANGRC/9 (“Angry nine”) radio transmitter, food and fuel. The pair then had a Jeep join the expedition, driven by historian Amado Araúz and his wife Dr. Reina Torres de Araúz, a distinguished anthropologist who was interested in studying Indian culture.

On February 3, 1960, the team began their journey. The 310-mile distance took 134 days to complete, as the thick jungle and obstaclestrewn pathways meant that they could travel only an average of less than three miles per day. After conquering ridges of up to 65 degree angles (with winches), climbing hills up to 600 feet (180m) high, and defeating malaria, the team finally completed their journey on May 13th 1960.

To commemorate their accomplishment, a concrete monument was erected at the border between Panama and Colombia. The engraving read: “Richard E. Bevir and Terrence Whitfield with their vehicle the Land-Rover called La Cucaracha Carinosa (The Affectionate Cockroach) were the first ever vehicle to drive overland from North to South America.” 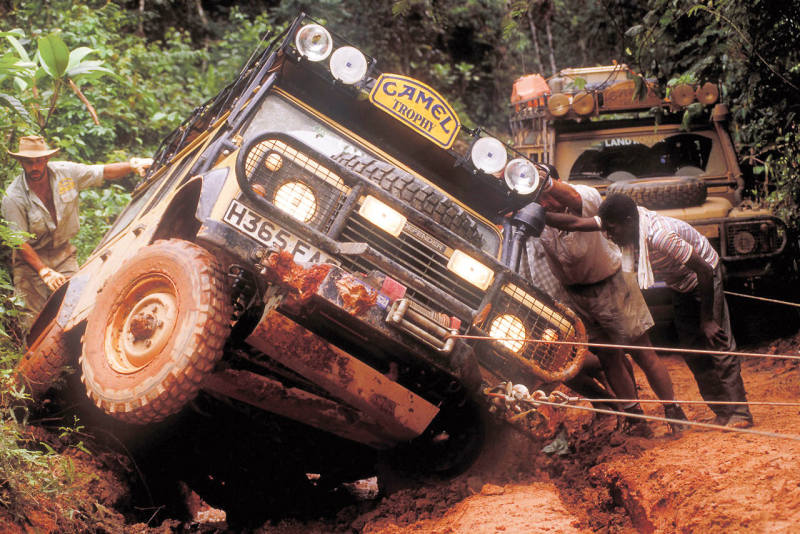