Home » LOOK! An all-terrain VW bus restored to tackle on or off-road obstacles

A Viennese mechanic name Kurt Kretzner modified a classic Volkswagen Type 2 T1 bus that initially left VW’s Hanover plant sixty years ago to a buyer in Austria. The van spent a lot of time touring the country before being found by Kurt who then modified it into a one-off-all-terrain beast.

It took Kretzner four years to design and build what became known as the ‘Half-Track Fox’. The modified bus features four axles. The two in front have 14-inch tyres and steer the vehicle, while the pair at the back has a chain drive mechanism that turns 13-inch spinners into tracks, allowing the vehicle to have a turning circle of roughly 32 feet (10 meters). 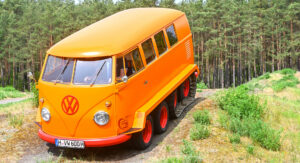 Kretzner believes that it is the ideal vehicle for everyone from mountain hut keepers, hunters, foresters, doctors, maintenance engineers for ski-lifts, TV and radio masts, pipelines. “I couldn’t find the vehicle I was dreaming of. So, I decided to build it myself”, Kretzner said. 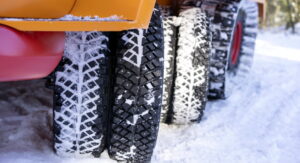 Each tyre has been fitted with a brake and Kretzner also installed an automatic limited-slip differential to help manage the power, which wasn’t much to boast about. The Volkswagen legend is powered by a 1.2-litre engine that delivers a total of 25 kW, with a top speed of 35km/h. 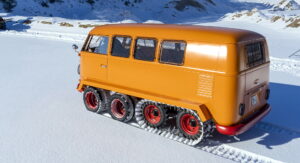 It is believed that this is not the only Half-Track Fox that Kretzner built as a second one is floating around too, but only this one has been found. After it was built by Kretzner it disappeared for seven years before it was found in a Porsche Museum in Gmünd, Austria. 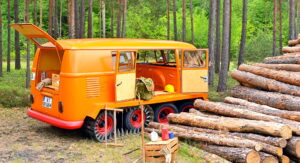 Thereafter, it ended up in the hands of the Bullikartei e.V., a society of first-generation Bulli lovers who began trying to rehabilitate the bus in 2005, but failed.

By late 2018, the Half-Track Fox fell into the possession of Volkswagen Commercial Vehicles who began a complete restoration process on the bus. It received a fresh orange matte paint job and the entire exterior bodywork was repaired. VWCV gave designers free rein to the interior, which boasts a beautiful beech and pine wood throughout the cabin. The Half-Track Fox made an official outing in February of this year, traversing through the snow with ease.