Words and pictures by Stephen Cunliffe

Stretching from the Mozambique border to Sodwana Bay, and inland to the Swazi frontier, the wild Maputaland region lies in the far north-east corner of KwaZulu-Natal. This beautiful and sparsely populated area is one of the most splendidly diverse and unspoilt landscapes in Southern Africa.

Sprinkled with coastal lakes, freshwater pans and sluggish rivers, it is home to a slew of pristine game reserves, wetland parks and marine-protected areas: an alluring prospect for any nature enthusiast. Stephen Cunliffe took the new RAV4 and a Toyota-fanatic friend along on a circuitous route through Maputaland to explore the hidden reaches of this under-rated South African outpost. 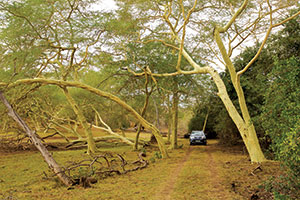 As I sat contentedly watching a family of white rhino grazing on the lush grasses of Hluhluwe Game Reserve, 11 gunshots rang out from the valley below, shattering the early morning melody of grass-munching and birdsong. I had no way of knowing whether the shots came from poachers killing a rhino for its horn, or from dedicated field rangers honing their skills at a nearby shooting range; however, the gunfire was a timely reminder that tranquil scenes involving these prehistoric-looking grey behemoths are becoming increasingly rare in this day and age, and made the privilege of sitting with a crash of peaceful rhinos that much more special.

This was the first day of our northern KwaZulu-Natal sojourn – and where better to begin an adventure through Maputaland than 280 km north of Durban, in Africa’s oldest game reserve? After all, Hluhluwe-iMfolozi is the natural departure point for a circuit of the northern region’s finest parks.

Wildlife-rich Hluhluwe was once the royal hunting ground of King Shaka, but today the towering grassland hills and lowlying thornveld are part of a world-renowned Big 5 reserve that is the pride of Ezemvelo KZN Wildlife’s portfolio. With official figures of 2 312 white rhinos and 200 black rhinos, the 200 km of game-viewing tracks that wind around the rhino stronghold of Hluhluwe-iMfolozi Game Reserve offer visitors the best chance of seeing a rhino in the wild today. Somewhat inexplicably, Hluhluwe-iMfolozi doesn’t offer camping facilities; however, the main Hilltop rest camp has a wide variety of accommodation options to choose from, and we ended up in one of their newly-built and spotlesslyclean 2-bed chalets.

It was fabulous, with its own private deck and braai area overlooking indigenous forest. Also worth mentioning is the self-guided Mbhombe Trail; this short hike is situated within the confines of Hilltop, allowing camp residents to stretch their legs in safety after a long day in the car. Keep an eye out for the playful troops of samango monkeys, shy red duiker, and flocks of crested guineafowl with their distinctive punk-rocker mohawks.

As we sat around the dying embers of our braai fire, watching a large-spotted genet poke around in search of scraps, I chatted late into the night with my companion for this exploration of Maputaland. Tim Korving is an old Stellenbosch University friend with whom I had shared the serious adventure of a ninemonth overland odyssey along the west coast of Africa some years before. He might be a civil engineer by day, but Tim’s true passion is 4x4s. He’s a self-confessed Toyota fanatic, and his RAV4 usually rubs shoulders with a Fortuner in his garage in Ballito; so, after a couple of hours of reminiscing about our crazy Africa experiences, the conversation inevitably turned to the new RAV4 and how the vehicle might handle the off-road challenges that awaited in Maputaland. We were both slightly sceptical about its abilities.

The fuel light was on the next morning, and the small filling station at Hilltop was out of order, so we left the park through the Memorial Gate in the north and headed for Hluhluwe town. As we rolled into the Engen garage on fumes, I said a silent prayer of thanks for the vehicle’s extra-large reserve tank.