Words and pictures by Butch Eggert.

It started with the idea to visit the African bush – not as part of a tour company, but solo.

The first thing I bought was an old Cruiser, a ’98 HDJ80. It had to be a Toyota, as everybody in Botswana swears by Toyota. It took about a year to modify. The cabin was replaced with an aluminium-clad cage into which I fitted a fridge/freezer, gas cooker, kitchen and tools. After that, I added a roofmounted solar panel, table and chairs, extra spare wheel, shower tent for the gas geyser, new BFGoodrich tyres, extra tank, and a GPS with new maps Then we were ready to go..

I imported my brother from France and we set out for the trip of a lifetime. We’d got used to the vehicle and had a really well-greased team operation going by the time we entered Botswana. The salt pans didn’t provide much in the way of animal life, but the driving experience was awesome. Then we went to the Rhino Reserve, where we encountered deep sand and engaged low-range for the first time – and as I shifted into low-range, the Toyota died. We scratched our heads, checked all the fuses and checked everything else, but to no avail..

A Botswana Defence Force patrol saw our dilemma and towed us to our campsite, where we waited for a mechanic to arrive the following morning. When the guy arrived I didn’t think he would be much help, but I had to learn not to judge a book by its cover. After listening carefully to the symptoms, he went to work: thoroughly bleeding the fuel system, torquing the cylinder head, replacing this and that… and voilà, it started first time..

After listening to my fears that a vacuum would build up because of the extra tank, he simply removed an O-ring from the filler cap, which guaranteed that this wouldn’t be an issue. When I wanted to pay him, he said, ‘No, you are my brother and I had to help you.’ What an attitude! I gave him 500 pula and my better t-shirts; what would I have done without him?.

On we went on our merry way to Maun, where we bought provisions, fuelled up, and then visited the wildlife management company. My cell phone wasn’t working in Botswana, so I went to a local shop and purchased a little phone with 100 Pula airtime; and then it was off for Moremi, Xakanaxa camp. We ended up using the sun for orientation, as often we couldn’t believe how a track would suddenly disappear; which meant that our GPS lady was constantly ‘recalculating’. By now the sun was getting dangerously low and we were nowhere near our booked campsite. The coordinates weren’t getting us anywhere.

When it was getting dark, we pulled in at Third Bridge camp, settling under an enormous tree full of sausage fruit. The baboons decided to drop this fruit on us from time – and at times it felt like they were aiming at us! Eventually we had to move the vehicle away from the tree to avoid a broken solar panel – or worse, a broken skull. We decided to make an early start of it, packing up at 05h30 while it was still totally dark.

I climbed on top of the vehicle, securing the chairs, firewood and some loose items while my brother knelt at the back of the vehicle packing up the last utensils. At this point the baboons were woken up by the lions and began making a hell of a racket, and the sausage fruit started raining down again. 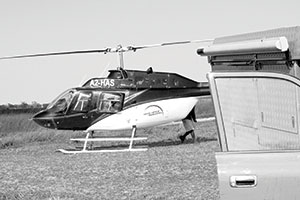 When I looked up to see what they were up to, I lost my balance and fell backwards in the dark, off the roof of the camper. I fell directly onto my kneeling brother, and at this point it should be mentioned that my brother had had a hip replacement about two years before. Well, I fell on top of that hip and the impact displaced it!

My brother was in absolute agony; all the muscles in his leg cramped up and he was totally immobilised. My first priority was to get his massive frame into the safety of the truck while I tried to organise help. I don’t remember how we managed, but eventually he was inside, in agony, while I was outside trying the new phone – which, of course, was not only out of range, but also out of airtime.

I found a friendly Swiss camper who had a satellite phone – but it was also out of range! So off we went to wake the camp staff while keeping an eye out for lions in the early half light. Eventually a lady appeared, opened the office and gave us access to the camp’s phone. We got hold of an emergency number, and then, after making at least another four calls, located a paramedic who said he would need a helicopter to airlift my brother to the hospital to have his displaced hip seen to. He duly arrived about 3.5 hours later (I don’t know how my brother endured the pain and the cramps) and we scooped the injured man out of the vehicle and into the chopper.