The Mercedes marketing machine drip-feed has now doled out more on its upcoming X-Class one-tonner double-cab, and this time with a proper drive in Chile. This skinniest of all South American countries is bakkieand- SUV mad, and promises to be a vital market for Mercedes’ premium take on the segment. Suffice to say plenty of new Navaras are driving around in that country’s towns and strungout rural villages, and there were many inquisitive glances at the badging on our test vehicles wherever they went.

The reason? One of the key questions about the new X-Class is this: to what degree has Mercedes stamped its brand value on the Navara underpinnings?

It helps that Nissan has 80 years’ experience of building pick-ups. Mercedes engineers indicated that the borrowing of a basic platform cut nearly a third off the development time, no doubt development costs were slashed, and building the X-Class in the same plant as the Navara in Barcelona, Spain, will add further synergies.

The fact remains that the X-Class models due to reach South Africa in the 2018 second quarter have essentially the same chassis, suspension and drivetrain as the Navara and its Renault-Nissan Alliance cousin, the Alaskan, which is also due to arrive in SA in the second half of 2018.

PRICE To be confirmed

Development engineers are naturally a cagey bunch, but did provide some insights into the elements that were retained, modified or replaced.

Transmissions were also given some software tuning to better pair responses to engine performance, resulting in smoother up- and down-shifts from the Nissan-derived sevenspeed automatic. A cable-actuated six-speed manual is also available.

Chassis adaptations include adding more stiffness to the core ladder-frame, and adding crossmembers to achieve a more rigid structure with different responses. Reducing Noise Vibration and Harshness (NVH) is central to the Mercedes DNA, and to this end the body-to-frame mountings were changed, further isolating the body from frame movement; while strategic insulation in the firewall, transmission tunnel and other areas has greatly reduced apparent drivetrain chatter.

Suspension changes are a dark art; achieving a supple ride while still being able to carry the claimed 1067kg load is a challenge. The rear trailing arm hardware and coil springs supporting a solid axle remain the class-leading feature, but new bushes, and revised spring rates front and rear dial up a different feel. Some front suspension components on the front double wishbone set-up are new, and all kinematic elements (caster/ camber etc) revised to Mercedes spec. What aids stability is a wider track (entailing a new rear axle) of 1632mm front and 1625mm rear. Better stopping, and this is a fairly marked improvement, is achieved by fitting disc brakes front and rear, instead of just in the front as usual. All markets outside Europe get the “raised” suspension – 222mm of ground clearance.

A rear diff-lock and part-time transfer case with low range completes the mechanicals, which are allied to electronic driver aids which include traction control, hill descent control (4WD models) and a hill hold function. These are all standard fare, amply demonstrated as effective in a short manicured drive through a 4×4 obstacle course. You will want to opt for the 360 degree bird’seye- view cameras which help one to see the front wheels and the ground directly ahead when on the move. 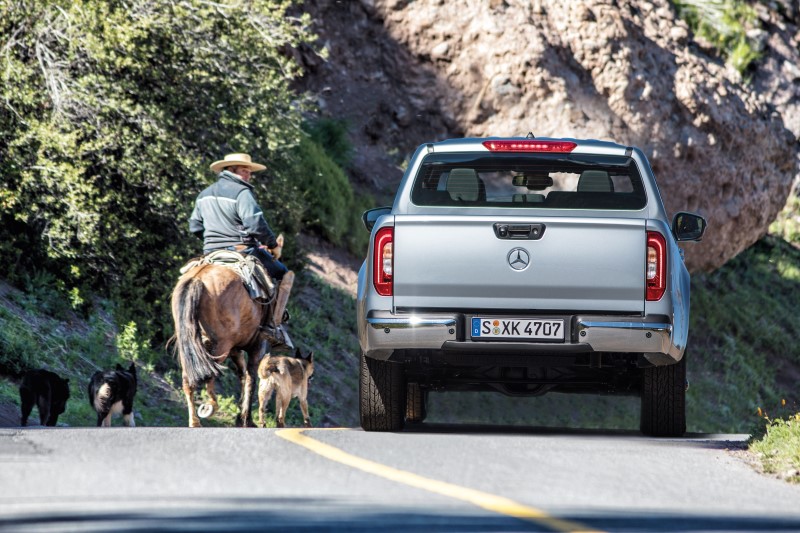 Good looker, or not?

The prominent Mercedes badge on the front tells it all: this is bold styling, with prominent sweptback headlamps and a distinctive grille. The tiny rear tail-lamps with their internal LED signature seem rather under-designed, but are practical and less prone to damage than the giant lenses of the rivals. The kicker on the C-pillar, side profile and load bed are (you guessed it) a dead ringer for the Navara. Sensibly, tyre/rim sizes start from 17-inch and range up to 19-inch.

What’s going on inside?

If you like the C-Class, this is going to be a pleaser. The steering wheel layout, window buttonry, instrument binnacle and middash tablet for infotainment functions are very similar. Ditto the turn-and-push hand control for most functions, which is just ahead of the centre console. The seats are premium and supercomfortable; good for long journeys. For more kit (and there are lots of options) you need to pay in to move up the trim grades from base Pure to mid-spec Progressive and top-end Power. Here the options are on leather, woodgrain finishes, a higherresolution 8.4-inch display, that 360 degree camera, and higher-end Comand multimedia system. The passenger-facing dash trim feels hollow and thin, and the 4WD switch is Nissan, for example, but the overall effect is premium, as it should be. The same goes for the levels of safety equipment, which is superior from base models upwards. 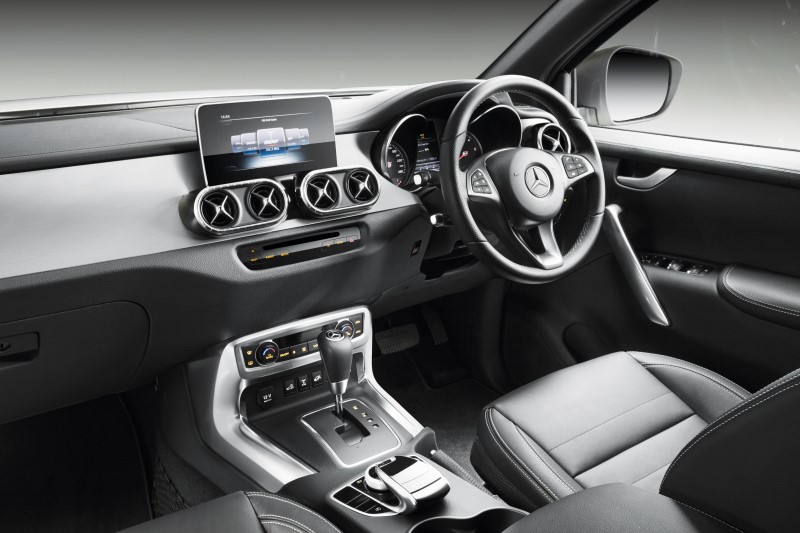 The ride and drive?

Launch routes are meant to highlight the good points of a vehicle, and this one was no different. While slightly knobbly on tar, as any bakkie is likely to be without a load, I reckon the X-Class 250 d models we drove have the big hits and corrugations on gravel well nailed. It feels stable and composed on rough sections, absorbing bangs and ruts with no trouble to the cabin occupants. It is pointy on tar, holds a line well, and tracks with confidence – perhaps aided by highway-terrain spec tyres. A moose test demo saw the traction control kick in late, testimony to the wheels staying planted. It’s all a good compromise.

How about that rival for the Amarok V6?

The 2018 second half launch of the big-brother V6 diesel version, the X 350 d, with outputs of 190kW and 550Nm, is where Mercedes is really hanging its hat. This mill is coupled to Mercedes’ own 7G-Tronic Plus transmission, and it features permanent four-wheel drive (not part-time as in the lower models), along with low-range capability and a rear diff-lock. It is the only model to feature Dynamic Select – offering five drive-modes: Comfort, Eco, Sport, Manual and Offroad. And judging by the sporty chauffeur drive we were given, it both sounds great and goes like the clappers; it whisked through some bumpy gravel tracks and shifted crisply, so that it was always in the power band. Our drivers hustled the so-called “pre-production” model through a handful of whoop-de-doops and tight corners on tar with far more speed and composure than a bakkie has any right to offer.

So that’s the pick, and a high point in double-cab development; but it’s probably not on everyone’s radar given that the base models will be priced from 37 294 Euro – that’s upward of R606 000. For sure the three-pointed star counts for a lot in the buying decision, so long as bragging rights are backed up by decent cost-of-ownership numbers when it comes to servicing, repair and other running costs.