You think you have the ultimate overlanding rig? Kerry Fraser and Michael Barton find out that the Namib dunes can throw up a few humbling, even scary moments…

0.5Bar. Pfah! – a normal and essential tyre pressure, anything higher and our heavily laden Land Cruiser would be going nowhere.

We could literally read the writing on the wall; the wall of the tyre that is, because it was lying fl at on the ground and a quick glance out the window read: Cooper Discoverer STT. We were also carefully monitoring our rear suspension airbags because the dangerous rolling we were feeling in the cab was threatening an overturn.

The atmosphere was tense as we watched the vehicle before us drop its nose over the slip face, the shorter and steeper side of a dune. The Hilux bared its belly to us as the back end slipped skywards – exposing the chassis, exhaust and rear axle. This was going to be a steep and long decent by the looks of it and we had to take care that our back wheels remained directly behind us as we skidded down the slope next. If we lost concentration for an instant, we could very easily roll our vehicle. We were also racing the clock. The sun was setting and we were still in the massive dune field of the Namib Desert, the oldest desert in the world. 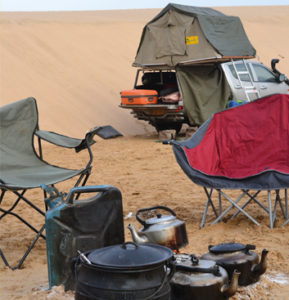 No-one wants to be driving the dunes after dark. Especially a desert with the honour of having the highest dunes in the world. Who knows what unseen dips and holes lurk in the shadows that can swallow vehicles whole. The two-way radio crackled to life, “Karavaan, Karavaan – All clear, you can now descend.”

That was us, the butt of the 4×4 Luderitz to Walvis Bay trail through the Namib Naukluft Park – the Karavaan (Caravan). We had not been forewarned that the dunes required a vehicle with a low centre of gravity, light and fleet of foot, broad tyres and plenty of horsepower.

I had simply read: Drive the Namib dunes in your own 4×4. And, well, we had one – a 4×4 that is! A wonderful 79 Series Toyota Land Cruiser 4.2 diesel with an Alu-Cab camper pop-top on the back. The ultimate overland camping set-up and much easier than pitching a tent!

Namib Dunes
We had a height of 2.6 metres and a weight of about 3.2 tonnes with all the extra rations of wood, fuel and water we were carrying. But this trail called for a slightly different set of talents. Pretty much the only thing we had in our favour for scaling the dunes were our tyres: wide Coopers that could fortunately withstand such pressures as 0.5 Bar and still remain fixed on the rims!

The Tour
The group we joined was part of I Dream Africa Tours and Safaris, led by Armand Basson in the Groen Neuf. Initially we booked with West Coast 4×4, who no longer offer this route.This route is described as ‘Extreme 4×4 over 5 Days’.

I Dream Africa Tours and Safaris also offer fully equipped rental vehicles, well suited to the dunes, should you not wish to drive your own 4×4 in the dunes, or if you do not have a 4×4.

Their website details what they provide and what EXACTLY is needed in terms of vehicle and packing requirements.