There has been a lot of hype surrounding the launch of Nissan’s replacement for the Navara, which also takes over where the Hardbody left off. The main hype is that it now features rear coil springs, just like many SUVs before it − including the Range Rover from the early Eighties, the Defender, and some awkward segment-mates like the Ssang Yyong Musso pick-up.

So, it’s not game-changing in the strictest sense, but it is a huge nod to the multiple roles that double-cab pickups must perform: active lifestyle duties taking various toys off the tar, ferrying heavy goods and garden refuse, and a host of in-town commuting tasks where the driver expects a cosseting, carlike ride and a bunch of car-like amenities. The new Navara is perfectly pitched to this market.

Apart from promising great ride quality, coils are cheaper to manufacture, 20kg lighter than leaf springs (in this example), offer much greater lateral stability (in the Navara’s case because of the five-link set-up which securely locates the solid axle), and generate 40% less friction. They are easier to finetune than the old cart springs, but not so tough, everyone says – except that the Nissan manual 4×4 is rated to carry a full oneton payload.

This third-generation Navara, known as the D23, replaces the D40 Navara (and D22 Hardbody), and is part of a major platform-sharing initiative with Mercedes-Benz (X-Class), Renault (Oroch) and the future Mitsubishi Triton. Compared to the old Navara it’s all of 35mm longer, and 50mm shorter in the wheelbase, so still a big, roomy vehicle, but has managed a weight-saving of 176kg. The styling is bold and modern with lots of swoopy creases, including a bonnet with pronounced raised wings, a big-V grille motif, and a feature lip on the top of the tailgate which aids airflow and hence fuel economy. V-Motion design, Nissan calls it, topping off the effect with twilightdetecting LED headlights – these promise 40% increased light intensity over halogens for half the power draw. 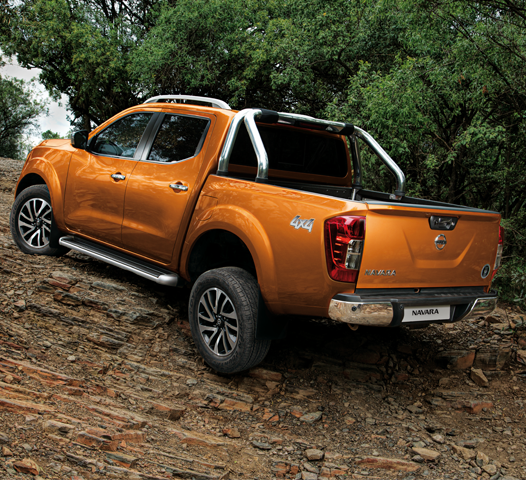 The SE (mid-grade) Navaras get 16-inch wheels with 255/70s, while the LE-spec gets 18s shod with 255/60s – all low rollingresistance H/T rubber. There’s a bigger load bay (1503mm long and 474mm deep) whose features include locking rails and a 12V outlet, and Nissan has introduced a trick new push-ofa- button cab slider window. On the safety front, seven airbags (including curtain bags) are now standard.

The interior is a treat of wide spaces. It feels generous, and has well-finished soft-touch surfaces, a new, short, centre console, a swooping V-like fascia, and an instrument binnacle in line with current Nissan design cues.

Navigation is standard, and the audio high-end, with most functions controllable from the steering-wheel controls; but the touchscreen feels slightly aftermarket. Then again, one is pampered in generous first-row seats (leather is a R13k optional extra), and there are three 12V sockets in the cabin, dual-zone climate control with outlets for the rear passengers, and a comfy slanted rear bench.

This generation features major powertrain improvements, starting with the brilliant 2.3-litre twin-turbo diesel: a Euro V engine that prefers its fuel in 50ppm low-sulphur form. It doles out 140kW and 450Nm, which is up from the previous 2.5-litre mill in the D40 4x4s which managed 128kW and 403Nm for a 19% bigger fuel penalty. The 2.3 is admittedly a bit thrummy and vibey on the start, but pulls smartly from very low rpms as the small turbo gets spinning, and is very smooth and tractable through a wide rev range as the turbos work in parallel. In other words, low-down grunt AND long legs. The latter is in part down to the new transmission options: the obligatory 6-speed manual (which could do with a firmer gate) and a very smooth and fastacting 7-speed auto. The latter model nudges the theoretical fuel index to 7.0 litres every 100km (up 0.5 litres on the manual), but in real-world driving delivers 8-9l/100km. 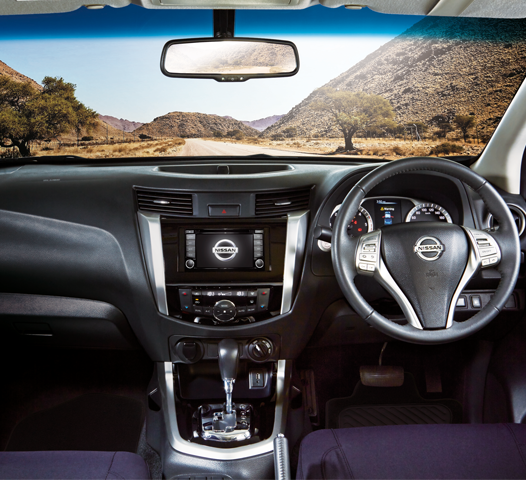 What about the ride and offroading credentials? The same tough, boxed ladderframe chassis formula coupled with coils all round gives a decent, but not eye-opening, magic carpet ride. It is set up for a load, after all. The rear coils are supposed to damp out the bobbing trait of hard-sprung bakkies, and to deliver more neutral understeer and less of the rear-driven oversteer, and this is largely the case. Stutter bumps are handled with aplomb at speed on gravel, but put that down to the introduction of traction control. (Nissan’s VDC – Vehicle Dynamic Control).It is well behaved at most speeds on a variety of surfaces. Engage 4WD, and one deploys the ABLS (Active Brake Limited Slip Differential System), which governs torque push via the ABS system on the same axle and between the front and rear axle.

We drove on sand briefly, which posed no issue at all, but we did not check its operation in low-range or in rocky, crawl conditions. Top models also feature hill start and hill descent control.

Spec for spec, the new 4×4 Navara is right up there with the rivals, has some new-to-segment features, and has made advances in terms of interior and exterior aesthetics and powertrain development. Add on some of the hardy accessories available through Ironman 4×4, including a set of tougher wheels, and one will have a very credible off-roader.