South Africans love to tow boats, caravans and trailers, often at the same time, and it was these land trains that were the subject of some confusion among the German hosts at the 2009 launch of the Amarok in Argentina.

How, asked the South African devil’s advocate, would this four-cylinder 2.0-litre diesel be up to the task? What was needed was a V6, something with the required grunt. No amount of persuasion by the Germans along the lines of fuel efficiency, emissions or actual turbo-induced pulling power, would sway his opinion.

The big V6 is now here, but back in 2010 local reaction to the 2.0-litre turbo four was slightly mixed. Was this bakkie too sophisticated to be a real workhorse? Did VW in fact have the credentials to make a proper bakkie? Ill-informed for the most part, these rants were enough to get forums in a frenzy. The milk and coke bottle jokes followed, even as the Amarok proved itself to be a finely engineered, quality product, and a superb performer on and off the tar. It was class-leading then, perhaps way ahead of its time, and many of its innovative technologies, from chassis construction to safety and driver aids, were glossed over or not clearly understood by a buying public blinded by brand loyalties.

Yes, there were a few issues: the extra 100mm width (1954mm) compared to most other bakkies made for a spacious interior and wide track that helped stability at speed, but could be a problem on narrow 4×4 trails. Less so than a Land Cruiser 200 Series (1980mm wide), but who wanted facts to get in the way of a good gripe. Then it was said that the beefy sump guard rails lowered effective ground clearance by nearly 40mm. True enough, but protection was foregrounded by the German engineers. Finally, the twin turbo engine, though impressively frugal and potent when spooled up, had a relatively narrow torque table, which conspired with the slightly clunky gear change to make the manual Amarok easy to stall.

Running changes saw the gear change and clutch action improved, the top engine’s outputs bumped up to 132kW and 420Nm, and an eight-speed ZF automatic introduced, an industry segment first. The Voetspore expedition under Johan Badenhorst hauled Amaroks all over the continent with just one major wet engine incident, and Sarel van der Merwe’s Spirit of Africa competition did a great deal to put hundreds of drivers in Amarok seats and dispel the cloying myths.

The rest of the world meanwhile had no such reservations. In seven years, some 455 000 units were sold, of which 25% went to Europe, Russia and Turkey, the 75% balance to Argentina (the country of production), and Brazil, Australia and South Africa – our local tally being 29 000 units, almost 5000 a year. One sales surprise has been that single cabs never took off, this as this segment is very price sensitive. The volumes were in double cabs, and increasingly automatics (by 2016 comprising 81% of Amarok double cab sales in SA).

The obvious conclusion, one shared by other manufacturers, is that the double cab has become the go-to lifestyle vehicle, one that has to ably combine the comfort and safety associated with a high-end SUV with the ability to carry any type of load. That customers are prepared to pay for these comforts has opened up a new price elasticity for the sector. The new Hilux and Navara have crept into the big-ticket arena, the forthcoming Mercedes X-Class will be right at the top, and with R700k plus in the public eye for such a purchase, the Amarok is finally on offer with that road-trainhauling Bix-Six engine that so many wanted.

Six of the best 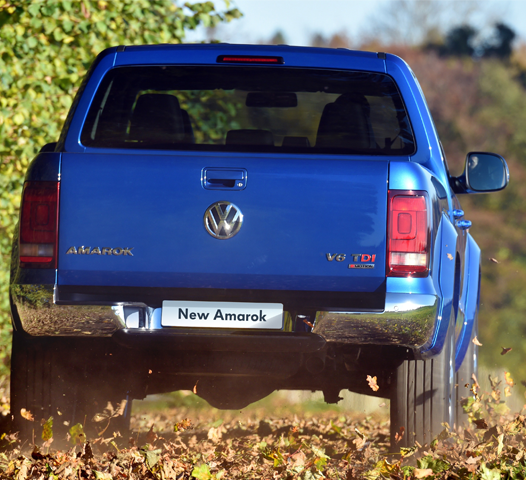 First things first. Yes, the burly 3.0-litre turbodiesel in the new range is a treat in this bakkie application. It’s a detuned version of the 24-valve OHC engine from the 2014 Audi A6/ A7 cars, one that has also had a place in the Touareg over the years, with a new variable vane turbo, newly developed low-friction piston rings and bores, and a dual-circuit cooling system – all helping to cut the fuel bill. This engine is only sold in combination with the eight-speed auto transmission, and prefers a diet of low-sulphur diesel, offering a power output of 165kW peaking at 3000- 4500rpm, with a healthy 550Nm of torque from 1400-1750rpm. So you get that classic muted V6 sound, masses of urge from the get-go, relaxed cruising ability, and, if you hoof it, an overboost function that for 10 seconds delivers 180kW and 580Nm.

Repeat at will. That explains the 8.0 second 0-100km/h sprint time, and the grin that spreads over your face when doing just that. Even when driving in the Highveld, the fuel bill was a modest 8.8 to 9.3 litres/100km in real-world driving. Cause for another grin.

Base model Amaroks now start with the single turbo 103kW 2.0-litre, and head upwards to the 132kW twin-turbo version of the 4-cyl diesel, in either 6-spd manual or 8-spd auto format, with the manual 4Motion versions offering part-time 4WD and low-range gearing, and the autos permanent 4WD. The centre Torsen differential provides a standard 40:60 Front:Rear drive bias. V6 versions, as mentioned, are only on offer with the auto.

All Amaroks carry a standard brake-based locking differential (EDL) which sends drive to the wheel with traction, so ensuring forward progress and safe handling in variable terrain with no driver intervention, plus a mechanical differential lock for the tough stuff. All 4Motion models have the Off- Road function, which adapts braking via the ABS system and modifies traction control (and drivetrain response) when on loose surfaces. Off-road DNA is on point: a 29 degree approach angle, 24 degree departure, 23 degree breakover angle, 500mm wading depth and 49 degree slip slope ability. It is rated to carry a full payload (936 kg for base model to just over 1 full ton for the V6 models when fitted with the optional heavy-duty rear leaf springs) up a 45 degree slope – military spec. As to that infamous towing ability, Amaroks are rated for up to 3.3 tons braked, with a 130kg tow ball weight. It also boasts one of the strongest chassis out there, with seven cross-members and the unique feature of the rear leaf springs being bolted to the sides of the main ladder members to lower the centre of gravity, increase stability and lower the load height. The load box is also largest in class: 2.52 square metres.

While the dimensions of the new models are unchanged, the sheetmetal creases of this big and bold bakkie have been sharpened in the current VW mode, seen mostly in the revised front bumper and grille. The grade walk has been changed too: Trendline is gone in favour of Comfortline, on to Highline and Highline Plus (which adds as standard leather seats, PDC with camera, Bi-xenon headlights, the higher-end infotainment system, and so on, to retain resale values). There’s also a new blinged-out topline model, the Extreme, with 20-inch alloys and lots of bolt-on brightwork.

Safety kit is of a high level: standard ABS, four (or more) airbags, traction control and the new Automatic Post-collision Braking System. Brakes have been uprated, offering discs all round on the top models. The telescopic steering adjusts for rake and reach, and there are three-point belts for all. Driver aids include hill descent control, trailer stabilisation and a camera-based PDC system. 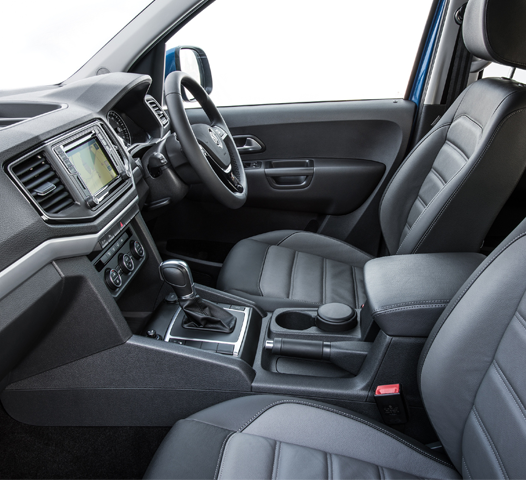 I was highly impressed by the revised interior. The old one was a series of master strokes in simple, functional design, and the latest iteration takes this further. There’s lots to like, from the wide centre storage box to the deep door pockets, split folding rear bench, many 12V outlets (including on top of the dash and in the loadbox), the comfy height-adjustable seats, and generally ergonomic layout. A classy infotainment suite is now on offer, with a 6.33-inch touchscreen, Bluetooth and USB connectivity, App-Connect and two grades of the infotainment system (Composition or satnavenabled Discover Media).

So it’s finally here: the classleading V6 and the smaller siblings. Amarok is still expensive, and the pick of the bunch – the 3.0 TDI 4Motion Auto Highline Plus – is priced at an eye-watering R716 600.

Yet all credit due, it is very little short of a high-end SUV with a practical loadcarrying ability. In all, the latest range is superb from almost any aspect you can consider, from sheer engineering excellence to fuel economy and ride and handling. Is it the best one can get? Drive one and find out.