For more than 40 years, Isuzu has been SA’s sole bakkie specialist. During that time, South Africans have depended on five generations of Isuzu, and can now rely on one more, since the recent unveiling of a brand new sixth-generation Isuzu KB. 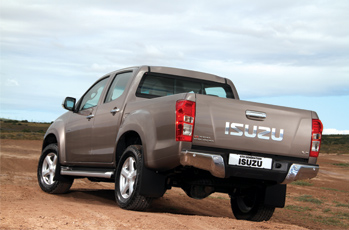 Of all the changes made to the new model, the most distinguishable feature is the increase in body size. Following industry trends, the sixth-generation Isuzu KB is now much wider (60 mm) than its narrow-bodied predecessor. Other measurement increases include more length (260 mm), height (60 mm),and wheelbase size (45mm). All three changes translate into more interior space and load-box volume. Speaking of which, all DC models feature a dramatic increase in load-box size. Measured at floor level, the new cargo area is now 135 mm longer and 70 mm wider than before.

Furthermore, rear-seat legroom is now 25 mm longer than in the previous model, making the Isuzu one of the roomiest DCs in its class. Cabin ingress and egress is also vastly improved, thanks to large chamfers on the base of the front seats, and because the doors are optimised for size, shape and opening angle. As a matter of interest, rear seat access is now best in class.

The new KB’s styling was greatly influenced by numerous airflow tests and computer analyses. As a result, the sixth generation Isuzu now boasts the lowest drag coefficient in its class, with a full 5 percent improvement on the previous model.

Particular attention was paid to the air flow over the Isuzu’s roof and load box. Subsequent improvements to this area have had a positive impact on the KB’s fuel economy and performance, and also reduced cabin noise.

A noticeable feature on all 4WD models is the replacement of the previous model’s plastic overfenders with integrated steel wheel-arch flares. As far as 4×4 derivatives go, all three body types (single, extended or doublecab) are powered by one of three engine offerings: the well-regarded 2.5-litre D-TEQ, a newly-upgraded 3.0-litre D-TEQ, and the all-new 2.4-litre DOHC petrol engine.

In terms of performance, the 2.5-litre D-TEQ motor produces 85 kW, 280 Nm, and has a combined fuel consumption cycle of 7.7 l/100 km. The bigger 3.0-litre engine benefits from various performance upgrades, all of which increase the motor’s power, torque and combined economy to 130 kW, 380 Nm and 7.9 l/100 km respectively.

Available in single – and doublecab form, the 2.4-litre petrol engine delivers 112 kW @ 5 200 rpm, 233 Nm @ 4 000 rpm and a combined fuel economy cycle of 10.4 l/100 km. All three engines are mated to a 5-speed manual transmission. There is no 4×4 automatic model currently available. Both D-TEQ engines now feature a re-located oil filter, which is easier to access when servicing. It is surrounded by a drip-tray to prevent spillage during filter changes. According to Isuzu, all these changes help to reduce service costs and operation.

The new KB’s chassis is both longer and wider than those of the previous generation. These measurementincreases improve ride comfort, handling, and stability; and, when combined with the KB’s fully revised suspension geometry, also improve suspension travel and off-road performance.

Additional off-road specs include an approach, ramp and departure angle of 30, 22.4 and 22.7° respectively. Ground clearance stands at an all-time high of 235 mm, and the KB’s wading depth is a respectable 600 mm. The KB’s previous push-button-type 4WD control has been replaced by an easy-to-use single Terrain Command Dial, located on the centre consol. All 4×4 models are fitted with a driver-activated rear diff-lock as standard equipment. The new Electronic Differential lock allows for engagement at speeds below 60 km/h, and automatically disengages when the vehicle’s speed exceeds 80 km/h.

Caravan, trailer and boat owners will be happy to hear that the new Isuzu KB300 LX model now sports a class-leading towing capacity of 3.5 tons; but note that at this capacity the trailer will require service brakes. All Isuzu models are covered by a 5 year / 120 000 km warranty, 5 year / 90 000 service plan, and a 5 year / unlimited km corrosion warranty. Service intervals are timed at 1 year / 15 000 km across the range.