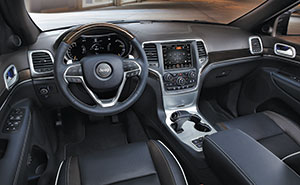 The 2014 Grand Cherokee features the CommandView dual-pane power sunroof, standard in both the Overland and SRT models, which extends from the windshield to the rear of the vehicle. The fixed rear panel allows light and open viewing for second-row passengers. The system comes standard with a power sun visor.

The connectivity and infotainment system has a new 8.4” touch-screen, with every gizmo and gadget you could possibly need, including two USB ports in the back seat and new textmessage- reading and voice-recognition software. The upgraded Grand Cherokee trim levels also include an instrument panel with a new 7” user-configurable multiview display. The instrument cluster can be configured in one hundred different ways, including navigation, speed, audio, fuel economy info and Selec-Terrain modes, for a drivercustomised experience.

Models with Quadra-Trac II or Quadra-Drive II 4WD systems now feature Selec-Speed hill ascent and descent control, operated by using the paddle shifters on the steering wheel. Quadra-Trac II, the full-time four-wheel drive system, features a two-speed transfer case which implements BTCS (Brake Traction Control System) on the front and rear axle. Its two-speed transfer case uses the inputs coming from a variety of sensors in order to determine tyre slip at the earliest possible moment and take the corrective action. The 2014 Jeep Grand Cherokee Overland model is fitted with Quadra-Drive II four-wheel drive system, with a rear Electronic Limited-slip Differential (ELSD). The core of the system is the central transfer case and an electronically controlled clutch pack for active torque distribution. Both Limited and Overland models feature, as standard, the new Quadra-Lift air suspension that allows the ride height to be manually adjusted by the driver, using the console controls. Ground clearance can be adjusted to five levels, maxing out at 280 mm.

With the front air dam removed and the Quadra-Lift air suspension engaged, the new Jeep Grand Cherokee features a 35.8° approach angle, a 29.6° departure angle and a 23.5° break-over angle. Standard on Limited and Overland, the Selec-Terrain traction control system allows the driver to select the most suitable driving mode to tackle any surface safely, by choosing between five different driving programmes: Sand, Mud, Auto, Snow and Rock. 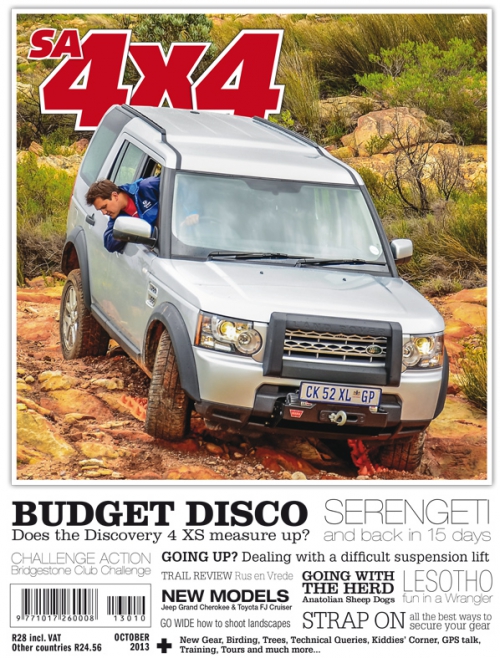