BLAST FROM THE PAST
By today’s sophisticated standards, the Isuzu KB300 is starting to show its age. Is this back-to-basics bakkie holding its own against the sector’s feature-filled thoroughbreds, or is it last out of the gates?

When my editor suggested that we test an Isuzu KB300 DC I wasn’t helluva enthusiastic – in my mind this brand was basic, dated and as boring as brown bread. But then I drove the Isuzu off-road and realised there’s more to bread than just the ingredients – a lot depends on the recipe.

EXTERIOR
The Isuzu is the last of a dying breed of narrow-bodied bakkies. Measuring just 1 800 mm in width this DC is some 144 mm and 50 mm narrower than the new Amarok and Hilux respectively. The Isuzu’s roofline is 100 mm lower, and in length this vehicle is 225 mm shorter than the Hilux; in fact, at 5 030 mm (including the rear step and towbar) the Isuzu is the shortest DC on the market.
Dimensions aside, I like the Isuzu’s boxy lines – even its bug-eyed praying-mantis-like face. Its shape may be a little dated, but this is still a good-looking bakkie that offers simple macho styling.

INTERIOR
Like a loaf of government brown, the interior isn’t set to excite. Climate control, steering wheel-mounted satellite controls, power-seat adjustment and slide-out cup holders are just some of the features you won’t find in this cabin – it’s all mechanical dials and po-faced styling. 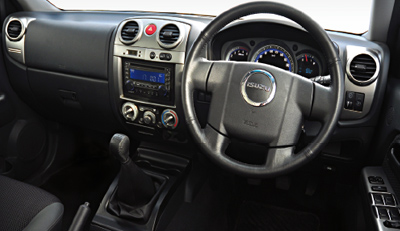 However, the KB300 does offer two contemporary features: 4WD selection is made via electronic buttons on the centre console, and the radio / CD unit is modern in appearance (but unfortunately complicated and cluttered in operation).
In terms of cabin space, two broad okes seated up front will just about rub shoulders, and the bench seat behind doesn’t offer much leg or shoulder room either. Incidentally, this vehicle failed our tall tester test – this is when we put a tall oke in the driver’s seat and then see whether he can climb in and comfortably sit ’behind himself’.
While the Isuzu offers a reasonably comfortable driving position, the design team decided to spec a centre console that sits too low to be used as an armrest.

OFF-ROAD
When I drove this bakkie it reminded me of driving the Patrol pick-up: there’s a strong sense of ruggedness and durability. Whether this feeling has anything to do with the fact that the Isuzu is one of the heaviest (2 000 kg) yet smallest DCs on the market, I’m not entirely sure, but either way it inspires driver confidence when venturing off-road.
Surprisingly though, the KB300 doesn’t offer much in the way of towing capacity, and although the Isuzu’s rated to haul a hefty 900, kg it can only tow a braked 1 100 kg – this will exclude most off-road trailers which typically have a GVM of around 1 500 kg.
We tested the Isuzu on two separate trails; the first offered sand and gravel driving, while the second was comprised exclusively of narrow, rocky tracks.
The Isuzu performed well in sand; however, it’s important to keep an eye on the vehicle’s rev counter – climb too high and the engine runs out of steam, but let the revs drop too low and turbo lag will kill your momentum. We found that the KB300 preferred third-gear low-range on our test trail’s narrow sandy tracks, as opposed to second-gear low-range.
On gravel, the Isuzu’s rigid chassis and relatively soft suspension made short work of corrugated tracks, and thanks to this DC’s small proportions it felt manageable and easy to handle through tight turns.
The Isuzu’s smaller dimensions again come into play when traversing narrow rocky roads. I’d tested the Amarok shortly before climbing into the Isuzu, and although the VW’s bulky dimensions didn’t bother me at the time of testing, I only realised afterwards how much easier it was to manoeuvre the smaller Isuzu.
As far as clearances go, the Isuzu DC sports approach, departure and break-over angles of 36°, 21° and 22° respectively. Ground clearance is average at 206 mm (rear diff), but if you do push the limits you can take comfort in knowing that the Isuzu’s undercarriage is heavily fortified with steel bash plates guarding the sump, front diff, transfer case and fuel tank.

ON-ROAD
Driven conservatively, the KB300 performs like a starved Ethiopian cart horse; but put a sharp heel to the ribs, or in this case floor the gas pedal, and a moment or two later you’ll enjoy some hoof-hopping action.
But there is a caveat. Below 1 800 rpm the 3.0-litre, single turbo, intercooled D-TEQ diesel motor displays noticeable turbo lag; above this point this unassuming motor fi res into life with 120 kW and 360 Nm. Unfortunately, this torque drops off again at about 2 800 rpm, leaving you with only 1 000 rpm of strong rev range to play with. But despite this, the KB300 still manages acceptable acceleration times, taking 11.4 seconds to reach 100 km/h and 4.9 seconds to sprint from 100 – 120 km/h.
In its favour, the KB300 offered great all round economy; we recorded 8.9 l/100 km on the freeway and 10.4 l/100 km on a combined cycle (urban and freeway use). Of course, these figures would really help us overlanders if the vehicle had a larger fuel tank capacity – at 76 litres it’s slightly on the small side (80 litres has become the sector average).
On the open road the Isuzu offers a responsive yet comfortably smooth ride, and thanks to the vehicle’s low roofline there’s minimal bodyroll to worry about; you should be more concerned about the slight presence of oversteer through sharp bends – a trait shared by most bakkies.
The KB300 has a 5-speed manual gearbox; there’s the option of automatic transmission but only in 2WD spec. On the whole, the gearbox is well suited to the 3.0-litre diesel’s needs and my only gripe with this unit is that the gear shift feels rubbery and clumsy in selection.

CONCLUSION
When I first drove the KB300 in late ’07 the vehicle failed to make much of an impact on me, but those were the early days of my off-road career and the things that impressed me then aren’t necessarily the things that wow me now.
On paper, the Isuzu won’t blow your hair back. It’s a basic bakkie with minimal features, a relatively simple motor and a smaller-than-average cabin, yet it’s priced surprising close to its more modern, more sophisticated and more featured-filled competitors.
So if you’re looking for a double-cab that offers great value for money the Isuzu doesn’t come near the podium. However if I were to buy myself a double-cab there are just two vehicles that would be on my list: the Hilux 2.5 SRX and the Isuzu KB300. Both are dead-simple, no-frills machines with a reputation for reliability, longevity and respectable fuel consumption.
Steering wheel-mounted controls and the like are great, but I can live without them if it’s gonna save me money. Likewise, power seats are all very nice but if you’re the sole driver of the vehicle you shouldn’t need to adjust your seat more than once anyway.
What’s more, according to the Synovate Awards (similar to the JD Power survey), Isuzu has for the last three years given the Hilux stiff competition as the diesel double-cab with the least complaints per 100 vehicles. Perhaps not such a surprising result given that Toyota Japan has a 5.9% stake in Isuzu’s diesel technology.
Sure, the KB300 doesn’t offer much cabin space, it’s a little bare in the features department and it doesn’t boast the market’s most advanced diesel engine, but it does have other endearing qualities, like the fact that it’s a tough, capable, dependable, and easy-to-drive double-cab.
I began this road test prepared to be disappointed, but by the end of it I’d changed my mind. This Isuzu isn’t the greatest double-cab but it leaves you satisfied – the automotive equivalent of a thick brown bread sarmie.

THANKS TO…
PG Groenewald at the Klipbokkop Mountain Reserve for providing valuable insight into the Isuzu’s abilities and allowing us the use of their word-class facilities. The Goodyear 4×4 Academy at Klipbokkop offers 4×4 training, trails, wonderful conference and accommodation facilities, and a diverse mix of terrain types including sand, rock and gravel. For more information go to www.klipbokkop.co.za or call 082 579 4515.