PIED PIPER
In our March ’08 issue we tested the Freelander 2 and declared it the best vehicle in its class. Late last year Land Rover released their second-generation Freelander 2. Does this newly upgraded model retain its sector-leading reputation?

Let me start by saying, “I love the Freelander 2,” to the point that I often use this little Landy as the benchmark against which I compare all other softroaders. Why am I telling you this? Well, before I begin this road test I want you to know exactly where I stand with the Freelander… I’m undeniably biased.

INTERIOR
Not much has changed here; the Freelander still boasts a well-designed, ergonomically friendly cabin that’s spacious, comfortable and great for driving long distances. Overall, it scores a definite double thumbs-up. However, even though I’m a Freelander fan, I’m going to tell you about two things that are wrong with this cabin. 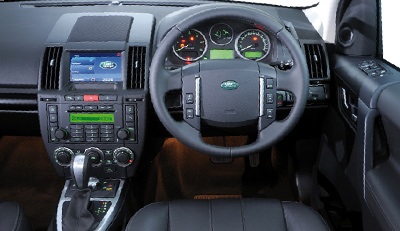 Let’s begin with the sunroof. Just like the unit in the Discovery 4, the Freelander 2’s sunroof has a perforated, cloth-like screen that’s supposedly designed to block the sun while offering extra cabin light. Unfortunately, this screen is about as practical as waterproof toilet paper – it’s particularly ineffective around midday when the sun’s rays fry your forehead and force you to squint your eyes. Note to the good blokes at Solihull: the African sun, she’s strong…
My last interior gripe is the Freelander 2’s key fob; this is an item that you insert into a dashboard slot, then you push a start button to fire up the engine. I fail to see the point of this arrangement. It would make sense if the key fob allowed you to start the vehicle wirelessly – if you could leave the key fob in your pocket and just push the button. But it’s not, so this setup is actually a step backwards – it’s less convenient than a normal key inserted into a good old-fashioned ignition switch.

EXTERIOR
The Freelander’s new look comes courtesy of a revised front bumper and a wider Range Roverish grille. The halogen projector headlamps are also new, as are the rear tail lamps which now have clear inner lenses.
Previously, not all the body parts were colour-coded, but the new face-lifted Freelander 2 now comes with additional colour coded parts such as the door handles, headlamp washer jets and door mirrors. On SD4 models the lower side door panels and rear bumper are also fully painted.

OFF-ROAD
Without low-range, lockers or award-winning wheel articulation, soft roaders aren’t properly equipped for hardcore off -road terrain. So what makes one soft roader more capable than another? In my opinion, it’s all about clearance. With good clearance you can tackle a number of challenging obstacles just using momentum, courage and the ability to spot a good line. So for me, the Freelander’s clearance is what sets it apart from its peers.
Look at the undercarriage and you’ll find some more noteworthy measurements – 210 mm under the front bash plate (the lowest point), 220 mm under the exhaust pipe (second lowest point) and then an eyebrow-raising 280 mm under the rear diff . To put this last one into perspective, there aren’t many solid-axle pukka 4x4s that boast a similar figure in this area. With approach, departure and break-over angles of 31º, 34º and 23º respectively, the Freelander takes a further leap ahead of its competitors.
Visibility is another feature. Not being able to easily judge your vehicle’s exterior dimensions makes driving off -road a nerve-wracking experience. But with its narrow A-pillars, large windows and short overhangs, this vehicle allows drivers to easily assess whether a track will permit the passage of a Freelander-sized parcel.
The fact that the Freelander has an excellent traction control system – Terrain Response – is the cherry on the top for this well-rounded, very capable softroader.
However, I wasn’t at all fond of this Freelander’s engine. There’s noticeable turbo lag below 2 000 rpm, with the engine feeling flat and unresponsive, but once you get to the 2 000 rpm mark the motor roars to life and rockets you into potentially dangerous obstacles. This isn’t as evident on level terrain but when you’re pulling away on a rocky slope it’s hard to determine how far you should depress the accelerator while trying to account for turbo lag and the need for extra grunt on a gradient.
The Freelander’s full independent suspension performs well on gravel tracks, responding quickly and smoothly to harsh corrugations. Thanks to its compact proportions and relatively low-slung roofline (1 739 mm) the Freelander feels nimble and steady on twisty tracks.

ON-ROAD
The Freelander’s 2.2-litre diesel is available in two guises: the 110 kW TD4 with 420 Nm and the significantly more powerful SD4 with 140 kW and 420 Nm tested here. Both versions have seen a 20 Nm increase in torque from the previous generation.
As far as transmission options go, the TD4 model is mated to a 6-speed manual transmission with Stop / Start technology as standard. Our SD4 was coupled to a recently revised 6-speed automatic gearbox. Stop / Start technology is not available in the SD4 model.
As mentioned in the off -road section, the Freelander 2 displays noticeable turbo lag, and this is at sea level. Floor the accelerator and the 2.2 diesel engine takes a couple of seconds to respond. It has to be said that not everyone who drove this vehicle found this turbo lag to be a problem. But I couldn’t stand it – I found that the delayed response made pulling into traffic very unnerving, so much so that I thought there was something wrong with our test vehicle. With that in mind, I headed to a local Land Rover dealer to test drive another unit. It performed exactly the same.
Despite this, the Freelander SD4 records some praiseworthy acceleration times, sprinting from 0 to 100 km/h in just 9.5 seconds. However, to achieve such a figure I had to stand on the brake with my left foot while pressing the accelerator to get the revs up. Once the needle got to 2 000 rpm or so I released the brake and floored the throttle.
Obviously, on the open road none of this is a problem as the engine’s speed is high enough to negate the turbo lag problem and the Freelander SD4 accelerated from 100 to 120 km/h in a respectable 4.11 seconds.

CONCLUSION
The Freelander 2 SD4 is available in three specifications: S, SE and HSE. You also get the option of the TD4 S and the I6 HSE, the 3.2-litre petrol version.
The vehicle in this road test, the SD4 HSE model, is the top of the range unit, priced at R489 995. The entry-level Freelander weighs in at a far more reasonable R384 995.
Given the Freelander’s price and offerings the Nissan X-Trail is probably its most likely competitor. But there’s a lot to consider in this sector: the Toyota RAV4, Honda CRV, Subaru Forester and even the Hyundai ix35 are all worthy competitors. If I were shopping in this sector I’d strongly consider the X-Trail or the Forester. 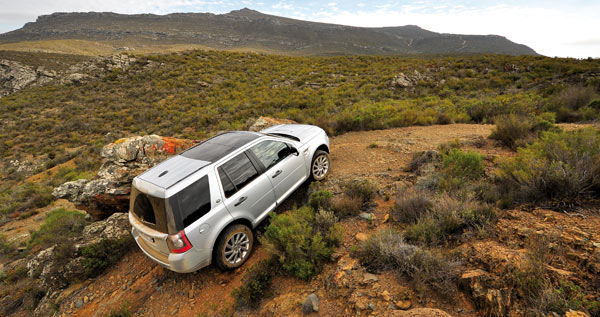 The X-Trail boasts a phenomenal measure of boot space (456 litres) for such a compact SUV and I’ve heard very few people complain about build quality issues; plus, it’s a great seller so it should be easy to sell when the time comes for an upgrade. However, while it’s a difficult vehicle to fault in terms of character, it’s simultaneously a difficult vehicle to praise.
The Forester on the other hand offers far more excitement. Its weight distribution and suspension setup is top class, the boot capacity is fair to good (336 litres) and it also comes with a reduction gear (a semi low-range) for more serious off -road work. Plus, it’s priced very competitively starting at R295k for the entry-level model and going up to R439k for the top of the range model.
However, if you’re looking for the best off -road performer in the compact SUV market, we’re gonna stick by our guns and say that the Freelander 2 remains the benchmark in its sector. Once again, a lot of this comes down to physical dimensions and clearances, on top of a great traction control system and peace-of-mind visibility.
Last but not least, a road test of the Freelander wouldn’t be complete without some mention of reliability. As many of you know the first-generation Freelander was / is often looked upon as the worst Land Rover ever built.
The second-generation Freelander 2 was launched in November ’06; since then we’ve received few, if any, complaints about this model. Having done some online research, surfing various international vehicle forums, the consensus is consistent the world over: the Freelander 2 is nothing like its predecessor.