PIGGY IN THE MIDDLE
We test drive the new Nissan Pathfinder 2.5 dCi, which aims to be an affordable option in the large luxury SUV segment. Is it finding its way or getting lost along the tricky path of price versus quality?

THE Nissan Pathfinder recently underwent some minor upgrades. At the unveiling of this updated model a Nissan spokesperson informed the media that their seven-seater SUV is priced to compete with the Discovery 4 and not with SUVs in the Fortuner category.
While the Pathfinder’s pricing (R518k) certainly confirms its place in the large luxury SUV sector, many consumers still view this vehicle as a bakkie-based SUV, similar to the Fortuner, Pajero Sport and Ford Everest. However, although the Pathfinder and the Navara share numerous design traits, in this instance the Pathfinder – much like its name suggests – paved the way for the bakkie and not vice versa.
This misconception surrounding the Pathfinder’s heritage is probably why Nissan SA feels a need to clarify this vehicle’s status as a high-end SUV and not as a basic bakkie spin-off. That said, no matter how you look at it, the Fortuner and Discovery 4 are both helluva tough competitors, leaving the Pathfinder very much stuck between the proverbial rock and a hard place. 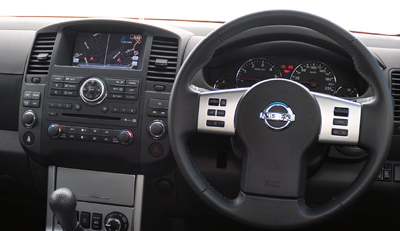 INTERIOR
A feature that has always made the Pathfinder an attractive choice in the SUV segment is its head and leg room – there’s plenty throughout the cabin; our tall tester test recorded 50 mm behind the first row. And although the third row isn’t a viable option for an adult, it should be relatively comfortable for a young child or a teen.
Passengers up front enjoy ample shoulder room as well as generous footwell space. The seats themselves are firmly upholstered, which, depending on your tastes, can either be regarded as comfortable or not. Try before you buy!
On the features front, a new infotainment system (offered as an optional extra) is possibly the biggest change. Its high-resolution touchscreen doubles as a rearview camera monitor as well as a display screen for things like fuel consumption readings, vehicle maintenance intervals, audio settings for the Bose sound system and a comprehensive navigation system.
I have to say that of all the vehicles I’ve tested, including those in the R1m+ category, this navigation system is the best I’ve encountered. It’s packed with features and easy to use, many of the options can be dialled in using the touchscreen or the manual buttons positioned below.
Other noteworthy interior features include numerous cup and bottle holders, two glove compartments, steering wheel satellite controls, a boot-mounted 12V plug point, and a versatile seat-folding configuration.

EXTERIOR
Not much change is evident on the outside of the upgraded Pathfinder, but alterations to the front end include a new bonnet, revised grille and a redesigned bumper assembly – it’s 80 mm longer and slightly more rounded. The Pathfinder’s rear has also seen a new bumper design, now with squared-off edges. 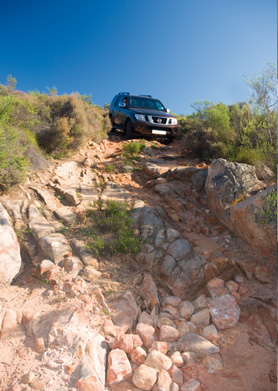 OFF-ROAD
As a full-time or part-time 4×4, the Pathfinder offers an array of drive modes: 2WD, 4WD Auto, 4WD Lock and 4WD Low. Mode selection is via a rotary dial on the centre console. The only other off-road aid is the ability to deactivate the vehicle’s traction control using the ‘VDC Off’ button, also located on the centre console.
In terms of off-road performance, the Pathfinder’s independent suspension performs brilliantly on gravel and presents a smooth ride on corrugated roads. However, on rocky terrain the Pathfinder’s super-soft suspension frequently bottoms out on rutted slopes. What’s more, due to a stiff anti-rollbar setup the Pathfinder doesn’t offer much in the way of wheel articulation, and the traction control system ain’t very effective either. Choose your lines carefully…
Our testing grounds, Klein Tafelberg, was where we conducted the Hilux vs. Ranger shootout (see pg 82 of our February ‘10 issue). In this test both bakkies completed the trail’s rocky route without complaint, but due to the Pathfinder’s abovementioned failings we chose to avoid this route for fear of damaging the vehicle.
Before conducting this road test I was warned of the Pathfinder’s low ground clearance; however, a tape measure revealed some surprising figures: 213 mm was measured under the sump and a noteworthy 260 mm under the rear diff. But although the Pathfinder’s undercarriage is neatly designed, the rear suspension mounts protrude more than most. Ordinarily, we don’t include suspension members in our ground clearance evaluation, but the Pathfinder’s rear suspension arms are particularly bulky and frequently fouled up on rocky terrain. There’s also a noticeable lack of underbody protection. As for the rest of its clearances, the Pathfinder features acceptable approach, departure and break-over angles of 30º, 26º and 24º respectively.
Lastly, with low-range selected and our tyres deflated to one bar, the Pathfinder performed excellently in sand thanks to the 2.5 dCi’s willingness to rev to the redline. Traction control must be deactivated when driving in sand; failure to do so limits the Pathfinder’s generous top-end power.
In terms of differences between the Pathfinder and Navara (other than the obvious), the bakkie boasts a solid-axle rear suspension with leaf springs, whereas the Pathfinder is equipped with independent multilinks with coil springs front and rear. Otherwise, both vehicles are bolted to the same ladder-frame chassis.

ON-ROAD
The recent upgrades to the turbo-diesel engine saw a power increase of up to 11 percent. On paper this translates to 140 kW @ 4 000 rpm and 450 Nm @ 2 000 rpm.
That said, I didn’t like this engine, specifically because of the noticeable turbo lag below 2 000 rpm. The previous motor generated more than enough power – instead of focusing on extra kilowatts Nissan should have spent the time and money flattening the dCi’s torque curve and providing more oomph at lower revs.
By comparison, Toyota’s 3.0 D-4D engine and Ford’s 3.0 TDCi motor have considerably less power and torque yet both offer smoother torque delivery and ample low-down grunt.
But what about a comparison between the Pathfinder’s diesel motor and the Discovery 4’s 3.0 TDV6? Well, that would be like pitting Baby Jack Matlala against Wladimir Klitschko – it ain’t a fair fight. The TDV6 engine is waaaaay more refined than the dCi motor; it’s smoother, quieter and generates more torque than a White House sex scandal. And it does all this with minimal, if any, turbo lag.
I’m also no fan of the Pathfinder’s gearbox; it feels notchy and loose at the same time, the gates aren’t easy to find and the lever has to travel a long way between gears.
Transmission options on this vehicle come in the form of a 6-speed manual or a 5-speed automatic with sequential override. Our test vehicle came fitted with the manual transmission, but given the choice I’d probably opt for the automatic as this setup would be more complimentary of the dCi’s lacklustre performance below 2 000 rpm.
Turbo lag issue aside, once the Pathfinder gets up to speed it offers a great driving experience on the open road. While you may be thinking that the manual transmission’s sixth gear is purely an overdrive option, the truth is that provided your revs are above 2 000 rpm, the Pathfinder pulls like a mule no matter what gear it’s in.
Acceleration from 100 to 120 km/h takes 4.5 seconds, and if you don’t watch the speedo closely you’ll often find yourself driving at 140 km/h when you thought you were doing 120 km/h – this is thanks to the Pathfinder’s quick revving motor and responsive suspension setup.
Around tight corners the Pathfinder effectively holds its ground, as mentioned before this is testament to the vehicle’s stiff anti-rollbar setup that offers almost sedan-like handling qualities.

CONCLUSION
The Pathfinder’s pricing kicks off at R493 000. If you opt for the fully-specced diesel model with onboard navigation and automatic transmission, you’ll be forking out R533k. The top-of-the-range 4.0 petrol version comes with a price tag of R553 800.
Nissan want you to see this vehicle as a competitor to the Discovery 4 but let’s start lower down the ladder with our comparisons. How does it compare to a Fortuner?
In my view, the only area where the Pathfinder outshines the Fortuner is on the comfort front – things like the infotainment system, seat warmers, all-round climate control and slightly more cabin space. The Fortuner trumps the Pathfinder with its torque delivery, a more capable suspension setup for off-road use and a diff-lock for those bail-me-out situations. And best of all, the Fortuner offers all of this for about R85k less than the Pathfinder.
Now let’s go to the top end of the comparison scale. How does it weigh up against the Discovery 4? Well, when comparing the Pathfinder’s top-of-the-range dCi model with the Disco’s bottom-of-the-range TDV6 model there’s a price difference of about R62k – the Land Rover being the pricier of the two.
The fundamental difference between these two vehicles and their offerings is that the Pathfinder boasts an onboard navigation system and the Discovery 4 doesn’t; however, in every other way the Land Rover is a much better vehicle. Things like cabin layout and ergonomics, cargo space, suspension design, handling dynamics and engine performance put the Disco way out in front.
I’m not trying to offend those of you who own Pathfinders, but if these two vehicles were spaceships the Discovery 4 would be the USS Enterprise and the Pathfinder would be Sputnik 1.
So Nissan’s own positioning actually paints the Pathfinder in rather an unflattering light. If you don’t mind forgoing a few bum-warming luxuries you can save lots of money buying a Fortuner (a more capable 4×4), or you can spend a little bit more and buy the class-defining Discovery 4.
Personally, I’d get the Fortuner (I know, I know, I’m becoming predictable on this score) and spend R85k on some great off-road gear.

THANKS TO…
Klein Tafelberg for the use of their facilities and in helping us conduct this test. This trail is ideal for anyone wanting to test their 4×4’s abilities on a variety of terrain types. Plus, there are great views along the way, and the accommodation facilities (camping & rondavels) are excellent. For more information call Stephen Burger on 082 558 4575.