I jumped at the chance to take the newest Prado for a jaunt to Arniston and surrounds on the Cape east coast. I’d driven up there in a Ford Ranger and 200 Series GX Land Cruiser in the past year, and it’s a great destination for exploring fishermen’s rock- and sand tracks along the coast, driving gravel, and cruising on some excellent hilly tarmac – notably the R316 to Bredasdorp via Napier. The sort of varied terrain one expects owners will want to tackle in their new fourth-gen J150 Prado.

The press launch had included a drive up Sani Pass from KZN and into Lesotho, which this familiar body-on-frame SUV had dispatched with ease. This latest exercise was more about taking a longer look at the daily operation of the vehicle and to become more familiar with its various assistance systems. And there was the chance to pack it full of camping gear and hit a few more off-road trails. 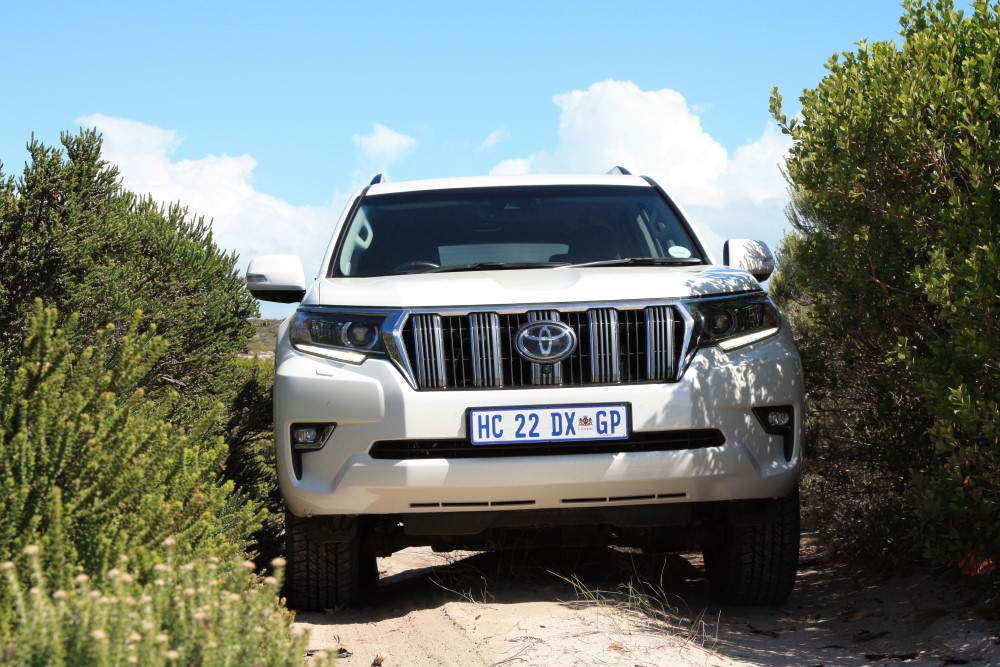 Strangely, there is a lot to like about the new Prado’s sheet metal. It is now 60mm longer, with a new grille, bonnet, wings and front bumper. It looks compact compared to a 200 Series, and the detailing is tidy, though not hugely distinctive. What’s great (compared to the previous generation) is that it has lost the bulbous insect eyes on the headlights, and the garish protrusions on the rear, in favour of tucked-back, LED-shod units.

This one has cleaner lines defining the wheel arches, and generally looks purposeful and neat. Unlike the earlier models, the arches are all stamped metal and not replaceable plastic mouldings – some might see this as a step back for anyone doing serious off-roading, but it certainly means less external clutter. What is also appealing to the eye is the distinctive hexagonal grille and dished bonnet centre section. Both echo the big-brother 200, and the latter feature improves over-bonnet visibility.

The VX-L grade has an impressive number of driver-assistance systems, including an effective Adaptive Cruise Control which keeps you a set distance from vehicles in front by braking and accelerating on its own. Off-road ability is ensured with Multi-Terrain Select (MTS) and its allied camera set, called Multi-Terrain Monitor, which allows one to select wheel-specific side and birds-eye views of the immediate surrounds, shown in detail on the navigation touchscreen. It’s not new tech, but it works very well on tight or rocky tracks. The MTS modes operate in low-range and offer five permutations for throttle sensitivity, gearbox shift points and traction control inputs. The latter, under the A-TRAC rubric (Active Traction Control) directs torque to the wheels with most traction, and it knows to brake wheels that are spinning. It’s clever enough, and works seamlessly in the background. An addition is Crawl Control, which allows you to set a crawl speed and avoid jabbing the throttle during rock-and-roll sections.

What helps expand the Prado’s command of various terrains, ranging from tarmac to graded trails, is the ability to change air-suspension settings. The coils up front on the double-wishbone suspension are complemented by air bellows on the multi-link solid rear axle, enabling you to adjust ride-height in the rear over a 60mm range. Damping firmness can also be toggled between Comfort (best off-road) and Sport (less roll on tar).

Then there is Toyota’s KDSS (Kinetic Dynamic Suspension System), which works by hydraulically firming up pressure on the anti-roll bars front and rear, and goes a long way to control body roll at higher speeds, while still allowing plenty of articulation at lower speeds. The best of both worlds, if you like. This is accurately reflected on our RTI ramp figures – the Prado achieved an index of 473, somewhat above that of the Discovery 5’s score of 453. (The higher the figure, the greater the amount of axle articulation before losing traction while driving up our 20° ramp.)

What does all this tech mean? The Prado offers smooth and firm-enough progress on tar; and off-road, up to a particular point, it is very capable − given its bulk, deep front skirt and sidesteps. Dial up the right settings, and the car safely does it all without fuss, making quite difficult 4×4 sections a doddle even for a novice.

No MTS on base models

Yes, the engine is slightly dated, but while it lacks ultimate punch, it is still very tractable. This is the venerable 120kW D4-D, which offers plenty of low-down grunt: ideal for most off-tar excursions. It runs a little out of puff when trying to make haste on tar; and, although the Prado will cruise fairly effortlessly at the speed limit, it is not really sparkling and responsive at speeds over that. The five-speed conventional auto is also short on ratios compared to some of the clever 8- and 9-speed rivals, and occasionally – such as when easing up a long hill – it does show. Everyone would have liked a drivetrain update, featuring a more refined six-speed auto and the new 2.8 GD engine available in other markets (and on the Hilux/Fortuner).  The only engine option is the existing 4.0-litre 202kW/381Nm petrol − which, incidentally, offers more sporty drive settings.

Whatever Toyota’s reasons, the D4-D is seriously Africa-proof and well proven as an overlanding combination. I always felt secure, was never seriously short on power, and did not feel daunted by overtaking moves. Planned right, it pulls properly when spooled up.

What this drivetrain combination does offer is decent fuel economy. Sensible driving, with a load, delivered 10.1 to 10.5 litres/100km, with one long stretch easing down to 9.8l/100km. An added benefit for the overlander is the standard extra fuel tank (adding 63 litres to the primary 87 litres), which makes 150 litres and a theoretical ‘real world’ range in excess of 1100km. 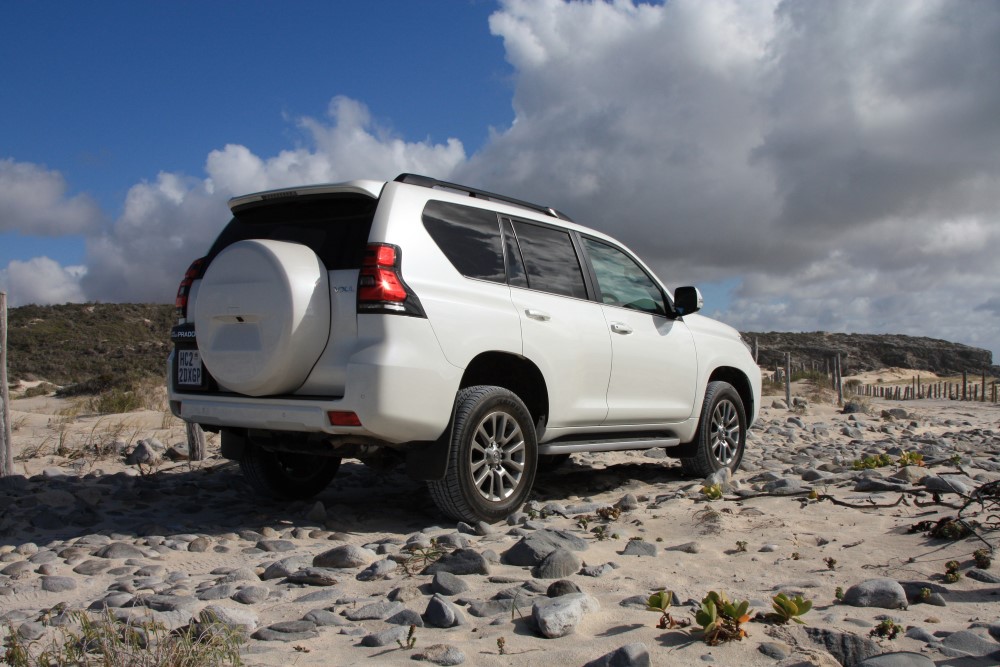 Standard equipment includes a set of Bridgestone Dueler HT-style 265/60 R18 tyres. You would change these for rubber with hardier sidewalls when planning an Africa trip, though the sensible 60 profile means that there is lots of rubber cushioning on hand, accounting in part for the well-damped ride, and some of the slight body roll.

While clearly no racing SUV, the Prado feels very stable and at home on gravel, soaking up big bumps and staying composed on corrugations even when pushed. This is a clear strong point. It is a heavy car, but the suspension is perfectly calibrated for these conditions. It feels smaller and less wieldy than the rather larger 200, and is somewhat the sweet spot between that and the Fortuner in terms of space and comforts.

The dash has been modestly redesigned, and while it is too busy to be a work of art, it is also more aesthetically pleasing than before − and what’s most important, is easy to use under all conditions. Mostly-logical arrays group button functions, there is a driver information screen in the binnacle, and not every function is hived off to a primary touchscreen which cannot easily be used while on the move. Here, function trumps form, and is all the better for it. Make a selection by button or via the 8-inch touchscreen, and it works; no system rebooting when the ECU goes into a time-out loop. Things to enjoy include a sunroof, and a wide centre-console which doubles as a fridge, navigation, and a 14-speaker sound system. I also liked the ease of connectivity to most smartphones, plenty of 12V outlets (front, mid and rear), the USB ports, and (for travelling), the benefits of deep door-pockets, and the variety of sensible storage spaces.

There are many features which position the Prado as the perfect family wagon, from the proximity sensor which unlocks the doors (useful you’re your hands are full of kids or bags), to the Park Distance Control front and rear, or the servo-assisted third row of seats which fold flat into the boot floor (these can be removed to create more space). A large swing-away rear door admirably keeps out the dust, allowing easy access to a very generous, square-shaped boot area. Yes, you can fit loads of stuff in here. Comfort is top-drawer; leather is everywhere. Legroom in the second row is generous, and the seats deep and comfortable. The high-quality ergonomics continue in the front pews which are electrically operated and offer a heating/cooling function. 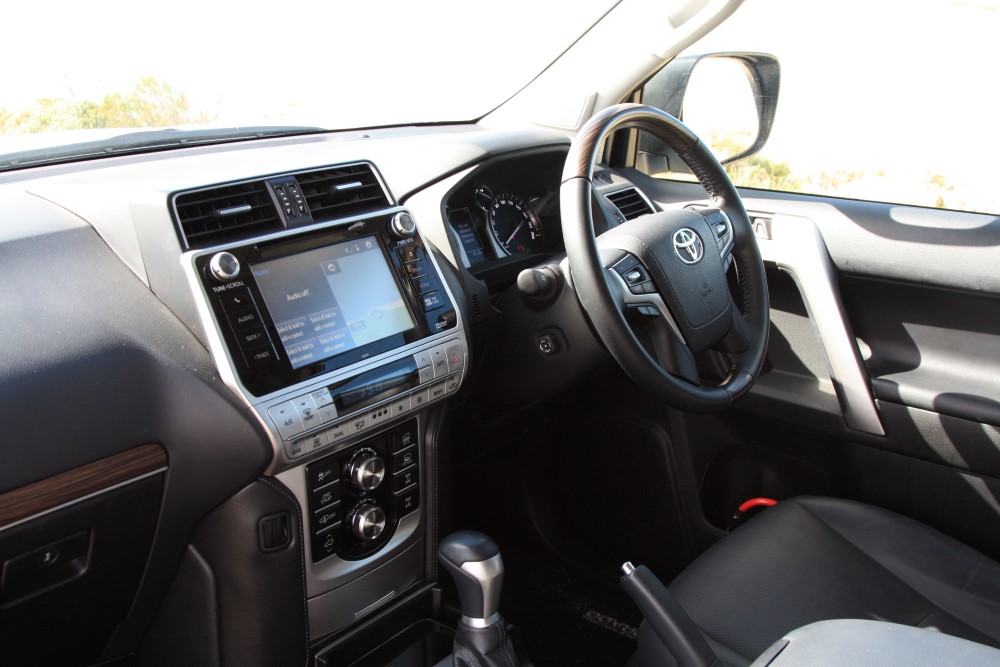 The sum of it

I found the VX-L Prado very easy to live with. Getting in and closing those big doors with a thunk is all part of the experience that tells you this vehicle is solid, dependable, and well-engineered. This continues as you dig deeper.

I was left impressed with the fit, the finish and the sensible, well-thought-out design. It is practical in all the right places, and everything works, every time, despite its having a wide array of fairly complicated suspension, off-roading and driver-assistance systems. This is a vehicle that you can take to the mall, park outside a swanky restaurant, and also travel in with confidence on a family expedition to Botswana. In other words, it’s a very accomplished all-rounder. Yes, the serious overlanding family might opt for the less complicated TX base grade, and lose out on the air suspension and MTS system among other niceties, in the interests of fewer things to go wrong. But, if you are in the market for a capable SUV that generously spans town needs, lifestyle demands and genuine 4×4 ability, then the VX-L has a great deal to offer for its sticker price.