GREAT EXPECTATIONS
Volkswagen’s new Amarok is stirring the double-cab pot, re-writing the sector’s value propositions while introducing technology never seen before in a bakkie. But has this much-anticipated double-cab made the most of its late arrival?

When the Amarok was first unveiled in SA I heard lots of folk predict the Hilux’s demise. I was doubtful, convinced that the mighty Toyota could weather any storm.
When I finally drove the Amarok I was forced to question the Hilux’s top-dog status, not because the VW was a superior vehicle, but because several Hilux owners had flagged me down with confessions of having ordered an Amarok.

EXTERIOR
No photograph you’ll see does the Amarok justice. So if you think it looks good in print, just wait until you see it in the flesh. You really need to stand next to this double-cab to appreciate its size and presence.
One noticeable difference between the Amarok and its rivals is its width. At 1 944 mm the Amarok pushes the trend of wide-bodied bakkies to new levels, measuring 109 mm broader than the Hilux and some 94 mm wider than the Navara. Other dimensions are a total length of 5 254 mm, height of 1 834 mm and a wheelbase of 3 095 mm. Approach, departure and break-over angles are 28º, 23.6º and 23º respectively.
The Amarok’s loadbox is particularly noteworthy; according to VW it boasts a best-in-class cargo capacity of 2 520 litres. What’s more, you’ll also appreciate the loadbox’s downlight for after-dark packing, and the 12 V power point for your portable fridge or compressor. It should be noted however, that our 50-litre National Luna fridge / freezer reported a low-battery warning when we ran it from this power supply – this could be due to a voltage drop caused by inadequate cabling from the battery to this power point.

INTERIOR
Climb into the Amarok’s cabin and you’ll be surprised by how much it doesn’t feel like a bakkie. This has a lot to do with the vehicle’s tall transmission tunnel which raises the centre console and therefore shortens the length of the gear stick. The steering wheel is also thick and sporty, but I was surprised that VW didn’t integrate satellite controls. 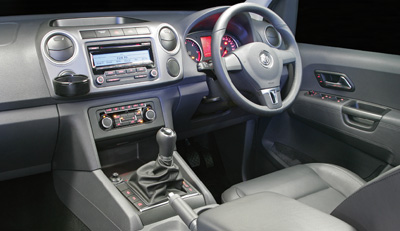 Thanks to its wide-bodied dimensions the Amarok boasts loads of cabin space, especially in the way of shoulder room. Leg room in the second row is great for average-height folk but taller passengers are gonna be hard-pressed to find knee room.
The Amarok’s cabin gets top marks for ergonomics; the controls are evenly spaced out, easy to read and all of the big-button variety. The operation of the climate control is self-explanatory and the CD/radio unit is even simpler.
Realising that countless people now travel with GPS devices, VW has added an extra 12 V power supply top centre of the Amarok’s dashboard, so you don’t have to run your GPS’s cord across the centre console – no more fascia scratches.

OFF-ROAD
A lack of ground clearance is the biggest hurdle facing the Amarok. Volkswagen quotes a figure of 249 mm but we recorded 206 mm under the rear diff and a dismal 190 mm under the sump. This last mentioned measurement is attributed to the vehicle’s heavy-duty guard plate, an item which looks like it was borrowed from a 6×6 Ratel. 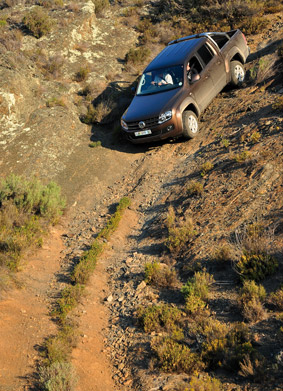 With the tyres deflated to 1.4 bar the Amarok bashed, bumped and scraped every rock we encountered. Although the vehicle’s underbody protection absorbed most of the punishment, it’s not pleasant listening to 1.8 tons of steel striking solid rock.
The Amarok needs larger tyres. Currently, there are two options available: 245 / 65 / R17 and 245 / 70 / R16. While it could be said that every 4×4 would benefit from bigger tyres, the Amarok is particularly in need of an extra inch or two and would do far better off-road if it matched the Hilux’s tyre size of 265 / 75 / R16.
Then there’s the notchy gear shift. It’s as though the box has been lubricated with extra-crunchy peanut butter; quick gear changes aren’t easy, particularly from first to second. Although you may get used to this in day-to-day driving, it’s hugely frustrating when you’re trying to snap change your way through soft sand.
Otherwise, the Amarok is hard to fault off-road; ride quality is firm and responsive on gravel but to the extent that the vehicle feels skittish on bumpy roads. Like all bakkies, weight is needed in the loadbox to maintain traction on uneven terrain – your camping gear along with a few bags of sand should take care of that.
The Amarok boasts a number of class-leading features you won’t find in many double-cabs, such as Hill Start / Hill Descent Assist, traction control and Off-road ABS; the latter deactivates the vehicle’s ABS system allowing the wheels to lock up and form a wedge of stone / sand in front of the tyres.
The part-time 4WD system is operated via several simple controls placed close to the gear selector. Two arrow-like buttons select 2WD, 4WD and 4WD low-range while various other buttons engage / disengage the abovementioned driver aids, the rear diff-lock and the vehicle’s ESP system.

ON-ROAD
First things first: how does the Amarok’s 2.0-litre bi-turbo-diesel compare to its 3.0-litre rivals? There should be a straightforward answer to this question, but I can’t give you one. On paper, the Amarok offers more torque and power than many of its 3.0-litre competitors. On-road, the Amarok delivers average to above average performance and fuel economy. Off-road, the Amarok feels punchy, responsive and more than capable. So what’s the problem? Well, it’s an All-Bran Flakes scenario.
Apparently, eating fibre keeps you fuller for longer; unfortunately, I get very little pleasure from eating something that tastes like recycled cardboard, so after a big bowl of All-Bran I feel satiated but not satisfied. The result? Within 30 minutes I’m opening the fridge and hunting for more food.
In a similar way, while the Amarok may sport 400 Nm and 120 kW there’s no audible grunt to the engine, making it sound slower than it really is. We repeated our acceleration test several times because I was convinced that my stopwatch was under-reading. In a real-life situation, like when overtaking a truck on the freeway, the Amarok sounds sluggish even though it’s accelerating from 100 to 120 km/h in just 4.86 seconds. So it’s a perception problem more than anything else.
Otherwise, the Amarok’s 2.0-litre bi-turbo proves faultless and it performs every bit as well as the 3.0-litre competitors it’s up against. However, when it comes to fuel economy, there’s no contesting the Amarok’s superiority; we recorded a combined fuel consumption figure of 9.2 l/100 km, which included urban driving as well as highway cruising speeds between 120 and 130 km/h. Volkswagen claim that the Amarok is capable of just 7.9 l/100 km if driven conservatively.
Transmission options are limited to a 6-speed manual gearbox where the sixth gear is designed as an overdrive ratio, reducing engine speed, noise, fuel consumption and emissions.
The Amarok’s suspension is the best I’ve encountered in a bakkie. Some may find the ride a little firm, but it’s because of this that this hefty double-cab can make a tight turn with minimal bodyroll and just the slightest hint of oversteer. When it comes to bumps and ditches, the Amarok soaks these up as if it were an R800k luxury SUV.
Interestingly, while on the subject of suspension, the Amarok has a payload capacity of 862 kg, but there’s a heavy-duty upgrade available at no charge, this increases load to 1 150 kg – but note that this option must be ordered prior to delivery.
Qualities I didn’t like in the Amarok: engine vibrations can be felt through the clutch pedal when depressed, urban commutes can be tiring due to the transmission’s short first-gear ratio, and once again, the gear selector is horrendously clunky – maybe that’ll ease up after 20 000 km or so.

CONCLUSION
I felt embarrassed driving the Amarok. It didn’t matter where I went – fuel station, shopping centre, even a small padstal on the N1 – people would hoot, give me the thumbs up or ask me how I got mine so quickly. The hype around this vehicle is phenomenal. Even my mother commented on the Amarok when she first saw it.
VW’s marketing department must be thrilled; I reckon they end everyday with party blowers, confetti and cake. Unfortunately, hype will only take the Amarok so far – at some point the product must sell itself on the dealer’s floor. Does it have what it takes to do this? Absolutely. Will it eat into Hilux sales in a big way? I don’t think so.
The Amarok is a terrific vehicle, one boasting loads of class-leading features and qualities. It looks great, performs well and is priced very competitively at R390k. The Hilux on the other hand is boring. Boring because it’s common. Common because it’s a damn good bakkie. That’s why nearly 50 percent of all double-cab owners in this country drive a Hilux.
As far as cost is concerned, currently the Amarok presents the best value for money in the DC sector, offering a number of driver aids as well as several nice-to-haves. But it shouldn’t take long for the rest of the market to start fitting traction control, hill descent control and that clever little GPS plug on the top of the dashboard.
From an off-roader’s point of view… well, the way I see it there’s no such thing as trouble-free motoring. Whether it be a blown cylinder head, bombed turbo, burst pipe or badly-worn brakes, no vehicle is impervious to wear and tear. Imagine you’re driving through the Hartmann Valley and your radiator pops – what would you rather be driving, a new Amarok or a common-as-muck Hilux?

ANOTHER VIEW
Ed: I’ve been reading the various tests and comparisons of this vehicle with great interest and mounting surprise. You see, I reckon that most reviewers, including Grant, have missed the big news completely.
The Amarok is a game changer. And not because it’s a VW, has a wider body, or because its motor drinks like a 2-litre and performs like a 3-litre. No, the Amarok is a game changer because it’s going to save lives.
Perhaps everyone missed it because the big news is just three little letters. ESP. It stands for Electronic Stability Programme. And apart from one other bakkie* it’s unique to the Amarok.
ESP is a life saver because bakkies are, by design, tail-happy creatures. This can be great fun at low speeds in the dirt. But it can also be deadly. If you’ve ever had the misfortune of having to make an emergency lane change at highway speeds in a double-cab, you’ll know exactly what I’m talking about.
ESP minimises the loss of control. It does this by braking selected wheels to help steer the vehicle in the intended direction, or even cutting the throttle. It does this faster than you can blink. According to no less an authority than the American Institute for Highway Safety, one third of fatal accidents are preventable with ESP.
And the question that a bunch of motor manufacturers hope you don’t get to asking is why none of them have ever offered you ESP on their bakkies before. Moral high ground? VW has it…
* The Navara V9X also has ESP but as this double-cab costs R500k it’s less likely to influence the broader bakkie market.

THANKS TO…
Leeuwenboschfontein for the use of their facilities during this test. This trail is just a short drive off the N1 (at Touws River) and lies nestled among the mountain slopes of the Klein Karoo. The trail is rocky and there are plenty of obstacles to test both you and your 4×4’s abilities. A range of accommodation types are offered, from camping to fully-equipped log cabins. For more information contact Jannie on 082 891 5911 or go to www.leeuwenboschfontein.co.za