GAME CHANGER
At first glance the Touareg appears to offer great value for money, but once you total its long list of optional extras this high-end SUV leaps from budget to big-ticket rather quickly. Are VW trying to pull the wool over our eyes, or are they actually giving us overlanders exactly what we want?

I used to be VW verskrik. In my early 20s, I owned a ’91 GTI MK2 that in turn owned my soul. In fact, I was so besotted over my Golf and the VW brand that I almost got myself a VW tattoo.
Some years later my wife and I had a bad service experience with her Citi Golf. The incident taught me two things: never assume that franchise dealers automatically provide good service, and never use your body as a permanent billboard for corporate branding. From that day onwards I vowed to never again own – or admire – another VW product.
A few more years down the line and the new Touareg has taught me another life lesson: never say never.

EXTERIOR
I’m not sure how they’ve done it, but to me the new Touareg looks smaller and more compact than the previous model, whereas it’s actually 41 mm longer and 12 mm wider. I think this deception is thanks to the design of the fully revised front end, which now sports a swept-back grille and headlight cluster for a sleek, low-profile look.
Overall, VW has made some great aesthetic improvements to the Touareg, as well as some structural ones: the new model is 10 percent lighter and five percent stiffer than its predecessor, equating to a 200 kg weight reduction and, according to VW, the Touareg has bragging rights to having the highest static body rigidity in the segment. Whatever that means…

INTERIOR
When I tested the VW Amarok in our December ’10 issue, I was hugely impressed with its interior; not just because of its solid build quality and thoughtful ergonomics, but because of the clever little touches which made it superior to its competitors. The Touareg continues this theme. 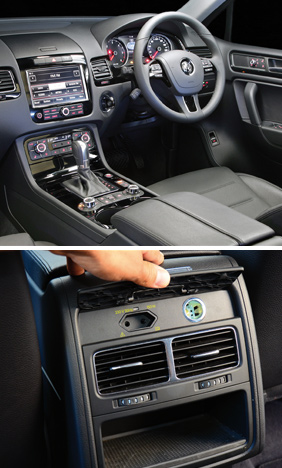 VW has designed the 5-seater Touareg with loads of leg and head room, and for those of you who are thinking of overlanding in this vehicle you’ll be pleased to know that it sports an abundance of boot space too – some 1 642 litres with the second row folded. Plus, if you’d like to trade packing space for additional legroom, the second row seats are mounted on sliding rails so they’re easily adjusted back and forth.
The Touareg’s hard-to-beat interior boasts ample storage compartments, cup holders and no less than five, yes five, 12 V plug points cleverly positioned throughout the cabin. What’s more, as far as I know, this is the only SUV to offer a 220 V power outlet, courtesy of a built-in 150 W inverter. This means you can power a laptop, charge batteries and even use a hair dryer when camping… your wife will be thrilled.
VW has gone to great eff orts to make this vehicle functional, right down to the entertainment system’s extra-large touch-screen buttons that are easy to read and operate, even when bouncing over a rocky off -road track.

OFF-ROAD
The Touareg features three engine derivatives: the 3.6-litre V6 FSI, a 3.0-litre V6 TDI and a 4.2-litre V8 TDI. We tested the V6 petrol model but luckily I had the opportunity to drive all three variants at the vehicle’s media launch late last year.
There are a number of optional extras available for the Touareg, but the two most significant are air suspension and the Terrain Tech package. In standard spec the Touareg features a full-time 4WD system with a Torsen-type limited-slip centre differential. VW has dubbed this system ‘4Motion’. 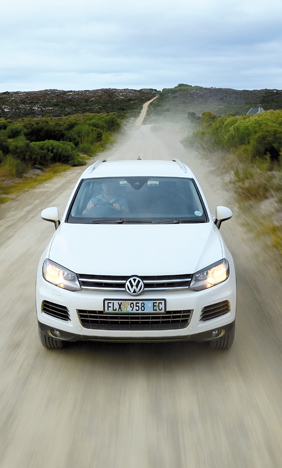 Buyers seeking additional off -road performance can opt for the Terrain Tech package called ‘4Xmotion’. This R20 000 optional extra enhances the vehicle’s off -road abilities by incorporating low-range gearing (2.610), a lockable centre and rear diff and additional ground clearance front and rear – 10 mm and 15 mm respectively. However, the Terrain Tech package is only available for the 3.0-litre TDI model.
Happily, the optional air suspension system can be ordered across the range; it boasts four ride height settings: Load, Normal, Off -road and Special Off -road. The first-mentioned setting lowers the vehicle’s ride height to allow easy access to the boot.
Besides that, there are a couple of things to know about the Touareg’s air suspension system. For starters, at 20 km/h the system automatically drops from ‘Special Off -road’ to standard ‘Off -road’. This is done to reduce body roll in high-speed corners. Once in ‘Off-road’ mode the vehicle will again drop to its normal ride height if a speed of 70 km/h is reached.
However, the air suspension system does feature an override button that allows you to lock the suspension height in the ‘Off-road’ mode, but unfortunately, when engaged, the Touareg is then limited to speeds below 70 km/h. This begs the question, why have the button in the first place?
What’s more, it’s important to remember that raising the Touareg’s suspension has a negative effect on its wheel travel. Of course, this can be said about any vehicle with air suspension – the problem lies in the fact that the air suspension’s travel is a fixed measurement and by raising the suspension height you automatically reduce what’s left for articulation.
Using the ‘Normal’ ride height setting the Touareg recorded an RTI score of 321, which dropped to 202 when the ‘Special Off-road’ mode was selected. By comparison, the Discovery 4 scores 504 and 477 between its normal and highest off-road setting. The Touareg’s optional air suspension system costs R31 500.
In terms of clearances, the standard spec Touareg sports 220 mm of ground clearance and approach and departure angles of 22° and 23° respectively. The Terrain Tech package increases this to 230 mm and approach and departure angles both to 26°. Fitting air suspension to a vehicle equipped with the Terrain Tech package takes the Touareg to a lofty 300 mm with a 33° approach and departure angle.
Unfortunately, at the time of testing, we couldn’t get our hands on a Touareg with the Terrain Tech package, but based on the performance of our test vehicle’s standard 4Motion system I think it’s safe to say that such a vehicle would be very capable off-road.
Our experience in the V6 petrol model – equipped with air suspension – was a positive one. The vehicle had no problems with ground clearance and when driven through a series of axle-twisters the traction control did an excellent job transferring torque to where it was most needed.
On gravel, the Touareg offered a comfortable, confident ride and thanks to the vehicle’s 17” rims and high-profile tyres there was no need to worry about potholes or damaging a rim – the Touareg comes OE equipped with 235 / 65 / R17 tyres but also features the options of a 255 / 55 / R18 or the V8 version can be fitted with 275 / 40 / R20s. Of course, it almost goes without saying that the fitment of 17” rims allows for a large choice of off-road rubber, an aspect which is severely limited in the Discovery 4 with its 19” rims.

ON-ROAD
The Touareg is a great all-rounder, effectively balancing off-road ability and on-road performance without compromising one for the other. On the freeway, you’ll find the Touareg cruises with supreme confidence, holding its ground through high-speed turns and showing minimal signs of bodyroll.
As mentioned earlier, the Touareg’s available with three powerplant options but only one transmission is fitted across the range, an 8-speed automatic. This may sound like a helluva lot of gears to get through but if it weren’t for the instrument cluster highlighting the selected gear you probably wouldn’t notice the eight ratios – the gear changes are that smooth.
The gearbox also offers several driving modes; there’s the usual ‘Drive’ mode that’s just like any other automatic, or you can slip the selector across for the semi-manual sequential mode, or pull it all the way back and engage ‘Sport’ mode for higher engine speed and faster response times.
Of the three engine plants I’d opt for the 3.0 TDI – not only is this engine extremely economical (VW claims an incredible 6.5 l/100 km on the open road) it’s also the only model that can be fitted with the Terrain Tech package. Plus, the 3.0 TDI offers similar performance figures to that of the 3.6 V6 petrol model, but with far more torque on offer – 500 Nm @ 2 000 rpm versus the petrol engine’s 360 Nm @ 3 200 rpm.
Alternatively, those wanting neck-wrenching performance should consider the 4.2 V8 diesel. The acceleration of this vehicle is phenomenal – just 5.8 seconds from 0 to 100 km/h. To put this into perspective, that’s as quick as the petrol-powered V8 supercharged Range Rover!

CONCLUSION
The 3.6 FSI Touareg retails for R562 600, the 3.0 TDI goes for R622 000 and the 4.2 TDI can be yours for R776 000. Of these models we reckon the 3.0 TDI will be the popular choice among off-road enthusiasts.
These prices are all entry-level, which means they don’t include any optional extras, of which there are plenty. That’s not necessarily a bad thing as it allows you to scrutinise costs and choose what’s important to you as an overland traveller. For example: park distance sensors may be vital for city dwellers but for bundu-bashers they’re a waste of money. The same might apply to the optional power-assisted seats and leather trim. 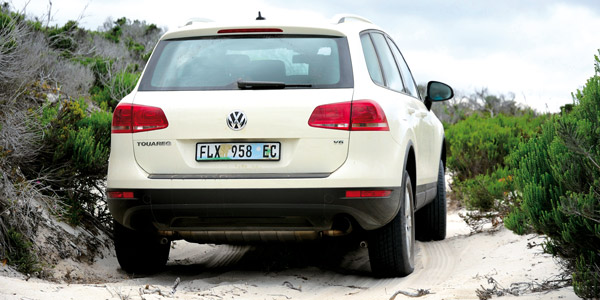 Of all the Touareg’s available extras I’d opt for the Terrain Tech package, air suspension, Bi-Xenon headlights and the built-in tyre pressure monitors; that would bring the total up to approximately R690 270 for the 3.0 TDI model, which is not wildly excessive for a well-rounded luxury 4WD SUV. But then again, at that price you can pick up a Discovery 4 TDV6 SE, which to my mind, even with its tyre issues, remains the benchmark vehicle in this sector. At this level, it’s a three-horse race between Discovery, Touareg and Prado. We’ve yet to get the new Prado for testing (are you listening, Toyota?), but it’s going to have to be helluva good to trump VW’s latest offering. We live in interesting times…