Words and pictures by Paul Donovan.

Snake bites have always been, and will always be, a major worry for travellers in countries which have large endemic snake populations, such as those in southern Africa. 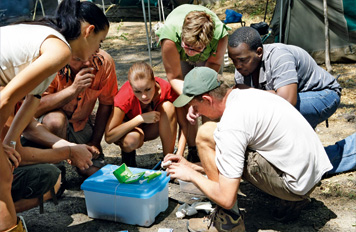 As we travel deeper into the wilderness, we venture into their territory and consequently expose ourselves to the risk of getting bitten. When someone is bitten in a remote area, hours away from medical treatment, proper management of the bite is imperative.

Please note, what you are about to read is how to manage a bite from a ‘first aid’ point of view, when you are in a remote location and there is no qualified medical practitioner available. A bite from a venomous snake is a medical emergency, and, after managing the bite, proper medical assistance must be sought immediately.

Before I go on, let me try to place your snakebite worries into perspective: the chances of being bitten by a venomous snake are relatively small.

in a worldwide study undertaken in ’98 by Jean-Philippe Chippaux for the World Health Organisation, it was estimated that there had been just over five million snakebites across the world.

Of the approximately 2 500 known snake species, 600 or so could technically be classified as being venomous to some degree or other; and of these only 250 or so are able actually to kill a human.

Obviously it’d be nice to be able to identify all 250, but unless you know your snakes, determining which ones are venomous and which aren’t is all but impossible. There’s no universal formula for tagging whether a snake is venomous or non-venomous. So, if you’ve been bitten, what should you do? Number one: do not panic. Only a small number of snake bites are from venomous species, so your next step is to try to determine whether it was a venomous species. This is easily done by looking at the imprint left by the teeth or fangs. A bite from a venomous snake will leave two distinct puncture marks, as though someone has stabbed you with a pair of knitting needles.

A non-venomous snake will generally leave two crescent-shaped marks made up of numerous ‘pin-pricks’. Did the snake actually inject any venom? Snakes use their venom primarily to kill prey, and only secondly as a defence, so they don’t waste it. They have control over the amount of venom they inject into their prey – or victim – and can typically instigate what we call a ‘dry bite’ where no venom at all is injected.

According to a report by the Liverpool School of Tropical Medicine in the UK some years ago, no clinical symptoms developed in 50 percent of elapid (cobra family) bites, in 80 percent of sea snake bites and in 30 percent of viper bites; supporting the theory that dry bites are far more common than most people imagine.

Signs & Symptoms
Before beginning any form of treatment, sit the victim down and wait to see what symptoms, if any, develop. Some years back I was bitten by a puff adder on live TV, no less (this snake is responsible for 60 percent of all snake bites in Africa). I freaked everyone out because I was so calm, while they were anything but. If after about 20 – 30 minutes no symptoms have developed, you can be pretty sure it was either a dry bite or a harmless snake. That being said, if you were unlucky enough to have been bitten by a Boomslang this won’t hold true, because symptoms of a bite from this snake can take 24 hours to manifest, with death possibly occurring up to five days later. But then again, to be bitten by this snake you would need to have been climbing a tree and harassing the snake.

The puncture wounds ooze blood, and swelling spreads rapidly up the bitten limb. Bleeding in other regions of the body such as the gums and nostrils is not uncommon, followed by nausea and vomiting. The bitten limb will also take on a bruised appearance with signs of blistering. First aid treatment of snake bites Most snake bites occur to the lower leg: the calf, ankle and foot; with the second most vulnerable area being the hands and arms. Should any ‘unusual’ symptoms develop after a snake bite, appropriate first aid treatment is extremely effective in managing a bite – and could even mean the difference between life and death, providing some simple procedures are followed. First, though, do not try making a cut and then sucking out the venom, or using a tourniquet, or applying potassium permanganate to the bite and setting it alight – yes, that was once considered a cure!

Use a pressure bandage
The most effective first-aid treatment is the application of a pressure bandage. This is not a tourniquet, as you are not trying to stop the flow of blood, but rather trying to compress the lymph system in order to minimise the spread of venom through the body. This system is effective for elapid bites (Cobras, Mambas, etc) but should not be used for viper bites (puff adders, etc) or Mozambique spitting cobra bites, as a side-effect of their venom is swelling, and to place a constrictive bandage on a swelling limb will only result in even more serious damage to the tissue. Applying the pressure/ immobilisation bandage: 1) Your first aid box should contain at least 4 x 150 mm-wide crepe bandages. 2) Reassure the victim and keep him or her as still and calm as possible. If the victim is panic-stricken, venom will spread more rapidly around the body. Place sterile gauze over the bite, and then a bandage over this. Wind the bandage upwards towards the armpit or groin (or as high as possible), and use as many bandages as may be required. The pressure should be similar to that of strapping a sprained ankle. To check that it is not too tight, test for an arterial pulse above and below the bandage; if you cannot find one, the bandage is too tight. Keep the limb as immobile as possible at all times, and bandage a bitten arm in a bent position so that a splint can be applied to the forearm, which can then be placed in a sling. Forget about trying to remove any clothing – bandage over these, as time is of the essence.

If difficulty in breathing occurs, administer artificial respiration. Don’t forget that the venom from Elapid snakes (Mambas and Cobras) causes paralysis; and, more often than not, continual artificial respiration may be all that is required to keep the victim alive. Even in hospital a victim may simply be placed on a respirator, as the body’s own defence system will begin to break down the venom; there may be no need for anti-venom. Sure, if you’re in the bush, administering artificial respiration may be exhausting; but if there are a few of you around, it is a simple matter of taking turns. (Artificial respiration, pressure bandage and immediate evacuation to hospital are all imperative if you’re unfortunate enough to have a run in with a black mamba. They inject large amounts of venom during a bite, and the effects are very fast-acting – death can occur in a matter of hours.)

Unfortunately, with a viper bite the venom works by breaking down tissue, and in a remote region there is little you can do other than manage the bite by keeping the person calm, and giving plenty of reassurance (but no alcohol); and do not be tempted to interfere with the bite in any way. Also, do not apply a hot or cold compress to the bite, as this will have no good effect and could actually damage the tissue even further.

Contrary to popular belief, you do not die immediately from a snake bite (unless the bite is straight into an artery or vein); but, obviously, the sooner you seek medical attention, the less damage the venom will cause.

Treatment of venom in the eyes Venom in the eyes from spitting cobras or Rinkhals should be flushed out immediately with any cool liquid at hand; water, cola, beer, cold tea; even urine. Do not rub the eye(s), as you risk causing more serious complications such as ulceration. Place a cold compress over the eyes, and move the victim into the shade as their eyes will be extremely sensitive to sunlight. Although the eyelids will become red, swollen and difficult to open, they will return to normal within 24 hours, providing that the venom has been flushed out. I speak from experience!

Using antivenom Commercial snake-bite kits are widely available from pharmacies and contain a vial of polyvalent antivenin. Although antivenin is the only effective treatment for snake bites, administering it is extremely hazardous. Should the victim suffer an allergic reaction to it (which you have no way of knowing will happen until you administer the antivenin), they may go into anaphylactic shock. Allergic reactions are counteracted with the use of adrenaline and bolstering the circulatory system via intravenous fluids, and are best left to trained medical personnel.

Of course, in an emergency situation where hospitalisation may be days away, the use of antivenin is a hard one to call. What I would suggest is that if you carry a snake-bite kit, also carry an Epipen, which is a shot of adrenalin. Keep them calm Shock is a major contributing factor in snakebite deaths! Some individuals bitten by a harmless snake have died as a consequence of shock, because they assumed it was a venomous species So, keeping the victim calm plays an important supportive role.

Disclaimer
The views and techniques expressed in this article are those of the author, and are provided as being the current recognised techniques for snake-bite treatment. Neither the author nor SA4x4 magazine can be held responsible for any deaths or injuries that may arise from the treatment of a snake bite using the above methods / advice. 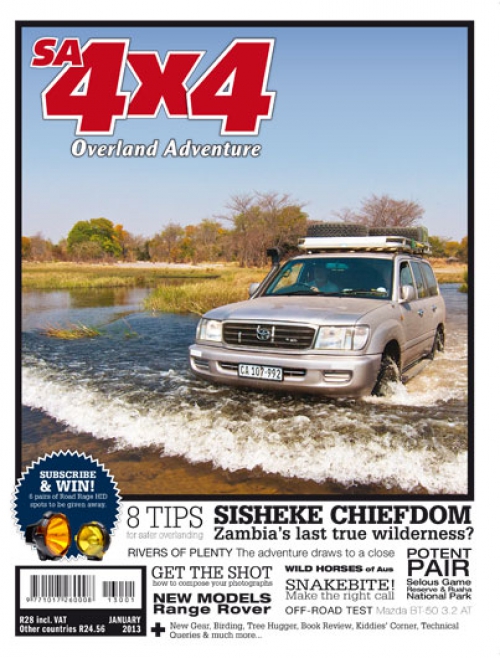 Bush Craft – Stay on the bright side