Bryce and I arrived in Mozambique in February 2013. Searching for opportunity and adventure, we devoted a year to exploring the corners of this convoluted, corrupt and ultimately stunning country. Having heard rumours that Mozambique’s northern provinces of Cabo Delgado and Niassa were home to some of the final remaining pieces of the African wilderness, we set our sights on driving along the country’s coastline to reach the proverbial Promised Land.

Equipped with a mighty Pajero Jr., an intrepid new puppy, a pop-up tent, Portuguese grammar books, and a healthy dose of scepticism, we set off, leaving behind the comforts of Tofo and Vilankulo. Through our adventures and misadventures, we came to know a country that both inspired and challenged us at seemingly every turn. What follows are our reflections – and, we hope, some helpful tips – on exploring this special part of Africa.

Police Check Point – 28 July 2013
I woke up early this morning, excited about our departure from Mozambique’s well travelled southern half, but anxious about crossing through the Sofala province. For months, the country’s dilapidated former rebel movement, RENAMO, had disturbed the Sofala strip of the EN1. After numerous ambushes, hijackings and a handful of deaths, the government (FRELIMO) had established a military escort for vehicles passing through this section – but the sporadic and bleak news reports did not build confidence in its efficacy.

At the Rio Save Bridge, we joined a military convoy of approximately 100 northbound travellers. Inching forward as officials snapped at us for mysterious infractions, we piled onto the suspension bridge. Curiously, once our lane was at capacity, we paused to allow southbound transport trucks to load onto the bridge as well, causing the cement structure to wiggle unnervingly. For 20 minutes, I assessed the strength of this recently constructed bridge, devising melodramatic emergency survival plans for the inevitable crack. Relief swept over me as we began to inch off.

Once over the bridge, the convoy quickly dispersed. Bakkies sped ahead while we trailed behind at the Pajero’s top speed of 80 km/h. We noted a sporadic military presence as we drove the 100 km, and, as time went on, my anxiety lessened.

The escort uneventfully dispersed just south of the Inchope intersection, at a filling station in Muxungue. North of Muxungue, and outside of Sofala, RENAMO threats subside and the country is generally safe for travel.

At the time of writing, the escort is still in effect. A convoy departs once, in both directions, daily (7 a.m. southbound from Muxungue, 10 a.m. northbound from Rio Save). While generally safe, ambushes are still recorded – the most recent occurring in February 2014. This convoy escort will continue until FRELIMO / RENAMO tensions are resolved – probably not before the upcoming presidential elections in October 2014. 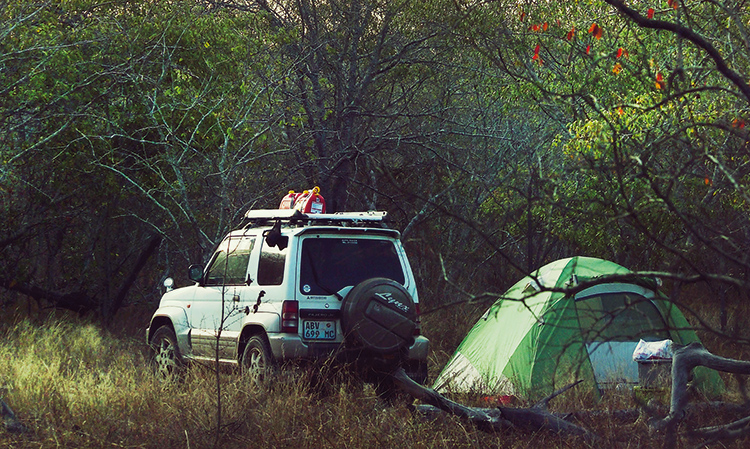 Mountains – 29 July to 5 August 2013
As one drives towards the Chimanimani Mountains, the familiar Mozambican landscape slowly takes on a distinct and refreshing feel. As the altimeter steadily increases, the air becomes cooler, the grass greener, and the trees bigger and more tangled. These mountains had been awakening my curiosity from afar for days, and to enter into their presence finally was deeply satisfying.

Our destination was Ndzou camp, 125 km south of Chimoio on the 216. It was the only formal lodge available to tourists within the mountains, and reputed to be lovely. It was easy to navigate the dirt road, apart from having to negotiate around the many dumptrucks that were busy contributing to a new tar road. We stopped frequently to appreciate the jungle-wrapped mountains that stretched out in front of us. Birds, and especially raptors, were prolific. The highlight was a crowned eagle that posed dramatically atop a dead tree as we sat beneath, struck by its beauty.

Upon arrival at Ndzou, I was immediately pleased by the camp that was to be our temporary home. We spent the following days in a secluded camping area which had stunning views into the valleys below and the mountains beyond. On the nights we did not feel like cooking, we would indulge in a coconut curry – with a cold glass of beer – from the local restaurant. What more could one ask?

The primary activity offered by the camp – and our reason for coming – was hiking into the valleys below in search of elusive forest elephants. On several occasions, we descended the trails with a knowledgeable and reasonably-priced guide to feel the forest from within, and, with luck, catch a glimpse of the musty pachyderms in this unique habitat. Although the elephants managed to evade our efforts at every move, just being in their presence, seeing their footprints, and smelling their rubbing posts was rewarding enough. Another guest claimed she had seen an elephant’s hindquarters as it disappeared into the forest; but, sadly, “not seeing” an elephant is an increasingly common complaint. Human pressures in these areas have greatly reduced their numbers, and conservation efforts remain limited. Same old story, different place.

To further occupy the time, Lindsay and I would drive back out onto the main road and down whatever trails would accommodate our vehicle. It was a pleasure to simply park the truck on a bluff, set up a picnic and meander throughout the hills. The people were not particularly friendly to strangers, but, then again, neither am I, so we were all happier to give each other a wide berth. The thatched houses, perfectly situated atop their hills and with vegetable fields and forest mingling and sprawling out beneath them, inspire thoughts of a world where people live in harmony with nature.