Usually when you hear a 4×4 oke talking about a Renault, he’s laughing-off the little Duster, completely oblivious to just how well it performs on hectic trails. This year, however, Renault has added another 4WD model to the fray, in the form of the second-generation Koleos.

As you can probably tell, it shares a platform with the Nissan X-Trail, although, in our opinion, it’s a far better-looking package from every angle, and is indeed a huge improvement on the slightly awkward first-generation Koleos. This specific platform is called Common Module Family (CMF) – D, and it optimises manufacturing by having five interchangeable sections, ranging from the chassis to the cockpit. On the outside, though, Renault has added panache with plenty of chrome inserts, soft curves, and artsy 18-inch alloys.

The exterior is brightened up, quite literally, with powerful LED headlamps, and there are LED daytime running lights and taillights as well. Inside, there’s a classy feel to things, especially when it comes to tactile interactions with the satin-finished chrome bits and leather trim. It’s relatively spacious for a mid-sized SUV, with fold-flat seats at the back, and a seat-up boot capacity of 464 litres. 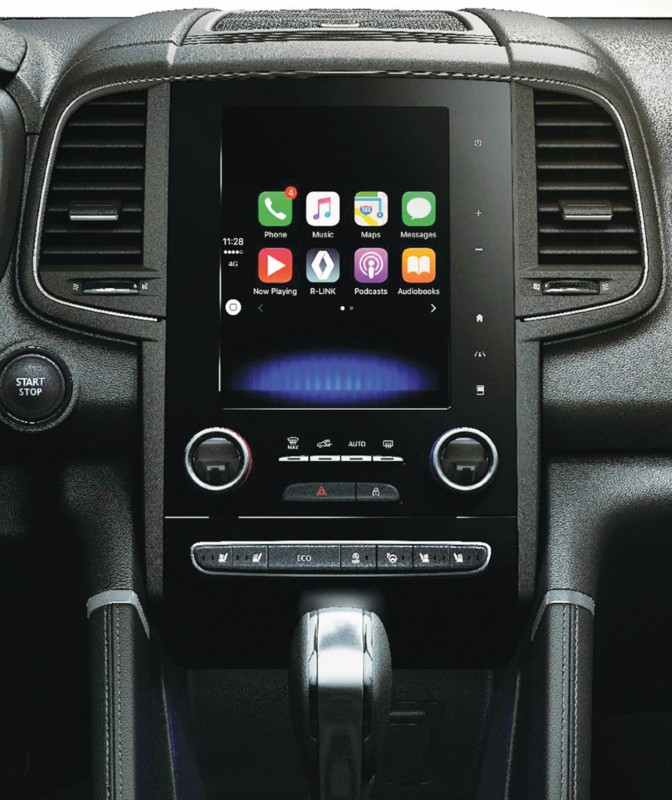 The Volvo-esque infotainment system is branded R-LINK 2, and pairs an 8.7-inch vertical TFT touch screen with features like Apple CarPlay, Android Auto, driving statistics, and a very good audio setup − made even better by the Arkamys 3D System. If you prefer buttons to screens, there are plenty of those on the steering wheel, but audio is controlled from a small stalk on the right-hand-side, which I found rather finicky. 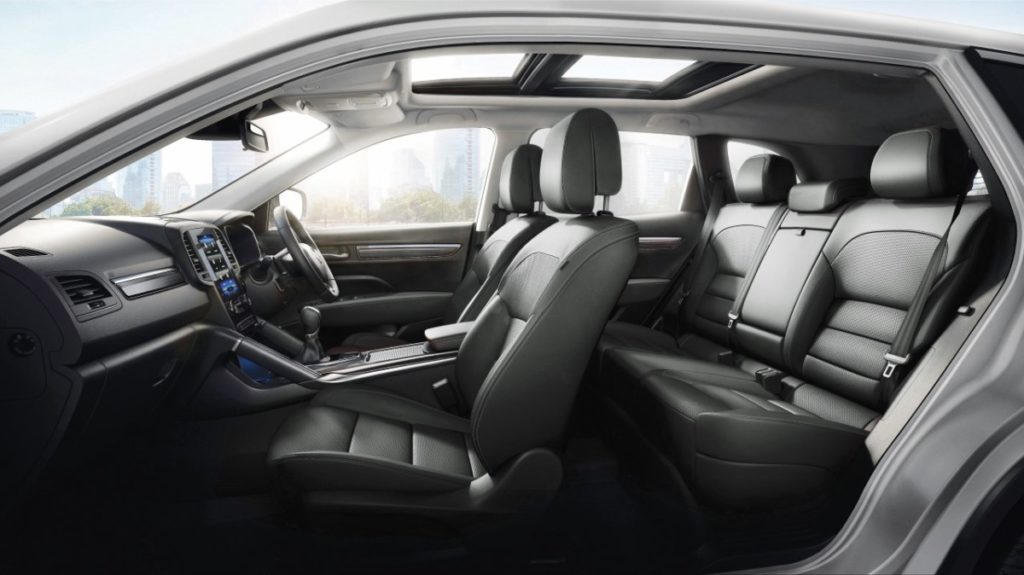 Safety-wise, it has all the modern standards like front and rear parking sensors, adaptive airbags, a rear parking camera, and blind-spot monitors. The Koleos has received a 5-star Euro NCAP rating. It has cruise control, but it’s not of the high-end adaptive variety, which is a nice-to-have feature on far more premium-priced vehicles.

Under the bonnet, a relatively frugal 2.5-litre petrol engine spits out a reasonable 126kW and 233Nm, but it’s throttled by the paired X-Tronic 7-speed CVT transmission, meaning that you never quite get the most out of the four cylinders. By modern standards, it’s not underpowered by any means, but it’ll have a hard time towing anything substantial. The CVT also doesn’t seem shy about rocketing revs all the way up to 5000rpm+ with any sort of enthusiastic throttle input. This can be quite annoying, and quite loud, too. 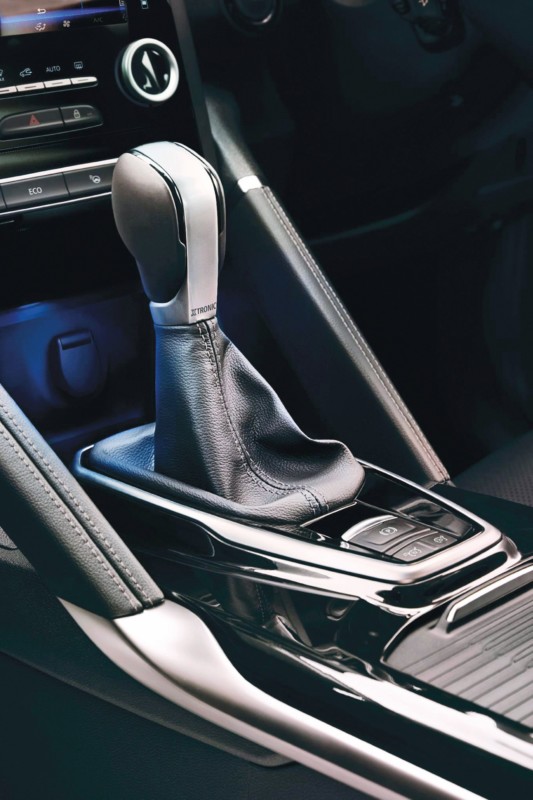 The Koleos handles surprisingly well, and suffers from less body roll than several competitors. I found the driving position up front to be a bit too high for nimble tar-road manoeuvres, but it’s obviously geared towards off-road escapades − a purpose echoed by the grab handles on the centre console. Evidently, Renault would have us believe that this is a genuine 4×4.

How, then, does it fare off road? Renault has fitted the Koleos with ALL MODE 4x4i Technology, familiar to Nissan 4WD owners, and a fancy name for a single switch that alternates the torque distribution between 2WD, Auto and 4WD/lock. In Auto, sensors detect loss of traction, and distribute torque accordingly. When a little more chutzpah is required, you can lock the distribution at 50/50 between front and rear axles, but only up to 40km/h. 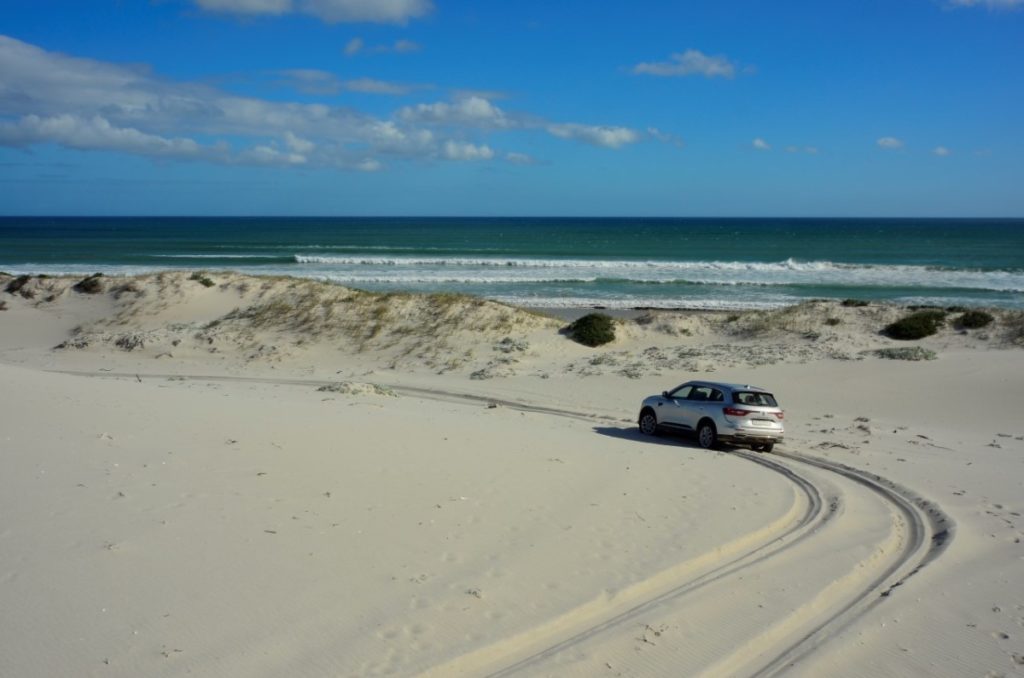 What all this means is that the Koleos is quite capable of tackling mud, snow, loose rocks, and even sand − which it handled with aplomb on a trail in the Cape Overberg. Cross-axle pits and gnarly rock-gardens quickly get it out of its comfort zone. It did require some help from a Fortuner at one point, when taking on a steep-ish sand dune, but I put that down to a simple lack of power, and the limitations of the CVT. However, as we well know, it’s not a true 4×4, but a soft-roader with decent off-road potential.

If we appreciate it for what it is, then the Koleos makes an excellent case for a family car that doubles as a holidaymaker. Couple that with the 5 year/150 000km warranty and 5 year/90 000km service plan, and you’ve got a quality package on your hands. 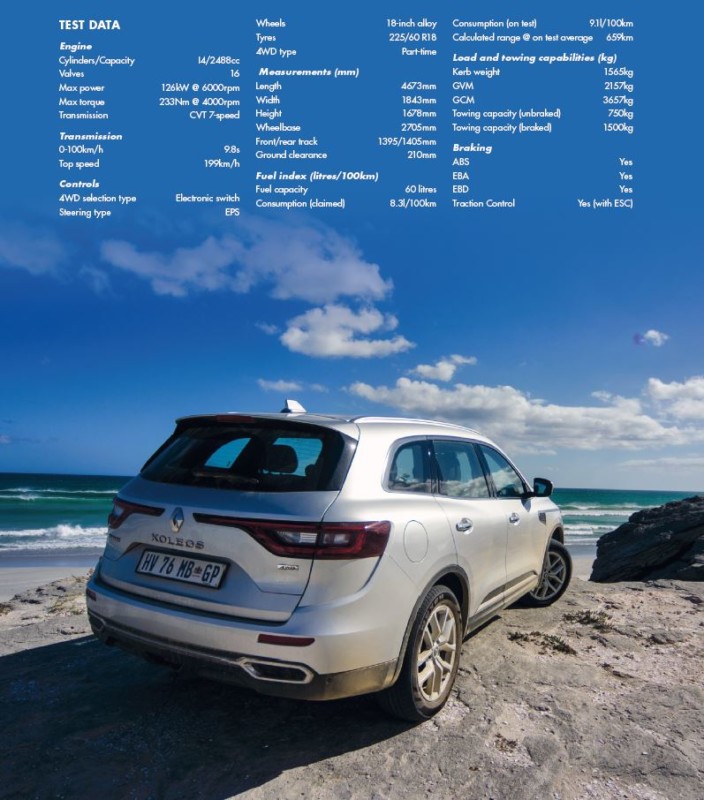