It was only a matter of time before VW dropped an auto box into their Amarok. And when they did, earlier this year, it was entirely fitting that they kept with the game-changing nature of their new model by trying something entirely new.

It’s not that they’ve introduced an 8-speed box, although that’s newsworthy in its own right. No, the big news here is that VW claim that their new gearbox does away with the need for a transfer box, such is its capability and versatility. The first gear is supposedly set up to function as a low-range gear. Of course it’s hooked up to 4Motion, VW’s permanent 4-wheel drive which incorporates a Torsen diff, splitting power variably between front and rear axle in a 40:60 split. 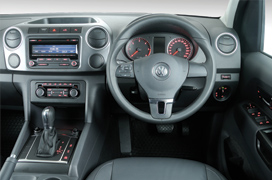 The super slick new box is said to offer great performance along with sterling fuel consumption – a claimed 8.3 l / 100 km – and commendable emissions, of just 219 g/km. It boasts a torque converter which allows for better response and less resistance to slip than a DSG transmission. As evidenced in the table, (above right) the top two gears are overdrive gears, with sixth being a direct ratio. This wide spread of ratios is purported to keep the BiTDI engine in its optimal torque band more frequently and for longer. The 2.0-litre power plant develops 132kW and 420 Nm @ 1 750 rpm; which adds up to a top speed of 179 km/h (in 7th gear), and a 0 to 100 km/h acceleration time of 10.9 seconds.

As of April this year, buyers of all Amarok will be able to spec the BlueMotion Technology package which makes use of a stop-start system and regenerative braking, allowing for further improved fuel consumption and CO2 emission levels. If you decide to part with R461 100 to buy the auto, you’ll be buying yourself a Highline top spec model which includes such creature comforts as a 6-speaker Radio/CD (MP3 compatible), dual-zone Climatronic aircon, storage drawers under the front seats, cruise control and 12-volt socket in centre console, dashboard and load box; as well as the further optional extras.