Smooth operator
The Nissan Pathfinder is frequently criticised as a so ie 4×4. I know this because I’m often the one making the accusation. But on a recent trip to the Baviaanskloof I realised the problem wasn’t with the vehicle, it was with me. 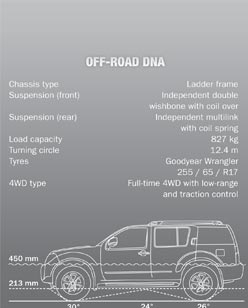 When I originally tested the Path nder 2.5-litre (see page 74 in our October ’10 issue) I was so focused on the vehicle’s weaknesses that I failed to appreciate its strengths, or more importantly, what it was designed to do.
Although the Path nder sports low-range the purpose of this vehicle is not to drive Baboon’s Pass or conquer grade 5 trails. No, the Path nder was designed to o er space, comfort and driving pleasure.
On hardcore trails the Path nder’s low running boards, poor clearances and so suspension setup count against it; however, when you analyse the vehicle’s super-supple suspension on the appropriate terrain – gravel – the Path nder’s true nature is revealed: it’s an overlander.
Whether it be graded gravel, corrugations or badly rutted roads the Path nder’s compliant suspension soaks up the bumps with ease, o ering a comfortable, surefooted ride that’s particularly relaxing on the long haul. And if things get a little tougher, you have the bonus of low-range gearing to back you up.

When you consider the Path nder’s speci c suspension setup, respectable fuel economy (10.2 l / 100 km), praiseworthy tank volume (80 litres) and high payload capacity (827 kg as quoted by the licence disc) you’ll be further convinced of this vehicle’s suitability as a family-carrying gravel traveller. I was particularly impressed by the Path nder’s versatile seat folding con guration: the second row can fold partly  at, fully  at or  ip all the way forward, while the third row can fold  ush with the  oor boards.  e vehicle also sports ample 12 V plug points – two upfront and one in the boot – and a phenomenal boot capacity, a cavernous 2 091 litres behind the  rst row. 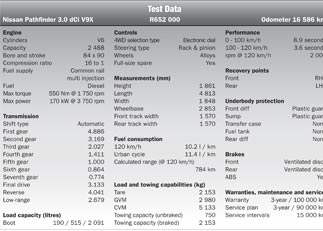 On-road, the Path nder’s 3.0-litre V6 turbo-diesel engine provides ample overtaking performance, thanks to its generous power and torque: 170 kW @ 3 750 rpm and 550 Nm @ 1 750 rpm respectively.  e vehicle’s 7-speed automatic gearbox also makes for a great low-revving unit, but it’s a bit too slow to downshi .
 e only setback to the Path nder V9X is its lo y R652 000 price tag. And although this does represent a lot of money, especially for a vehicle so similar to its bakkie brother (Navara), the V9X does o er dozens of standard  t luxury features like satellite navigation, 7” VGA touch screen, 9.8 GB hard-disk drive, 9-speaker Bose audio system, rear-view camera, iPod connectivity and much, much more.

If you consider all its attributes, a clear picture of the Path nder’s purpose, strengths and abilities comes to view; basically, it’s a family-friendly SUV with terri c overlanding potential. What’s more, although it may not be a die-hard trail blazer in standard form, it doesn’t take much to transform the Path nder into a capable o -roader. A suspension upgrade should do the trick.