It always happens at the most awkward moment – when the sun is setting on a bad road in the middle of nowhere. We had driven our Mercedes Sprinter 4×4 from Arica, a coastal town in the north of Chile, towards the border of Bolivia. It takes only a few hours for the road to climb from sea level up to 4850m above that in the Andean mountains. It was already late afternoon, but we wanted to use the best light to take pictures of Lake Chigará with the snow-covered Nevado Sajama (at 6542m, one of the highest volcanoes in the world, and the highest mountain in Bolivia) in the background.

The air was very thin, and we had not yet acclimatised to it. On the way back from the pass, I was blinded by the setting sun and we hit a large rock lying in a construction site on the single-lane road. The Sprinter shot up like a rocket, only to hit another rock with its right rear wheel.

Within a few seconds, the tyre was flat, and we could see that the rim was significantly distorted. And then we learned a new lesson: changing a tyre at nightfall in the Andes at 4650m can be very challenging. Not only is it bitterly cold, but in the pitch-dark, nobody will stop to help you.

Some weeks earlier, we had shipped our Mercedes Sprinter 4×4 on the Grimaldi vessel Grande Africa from Hamburg in Germany to Montevideo in Uruguay. Usually it takes about four weeks, with some stops in West Africa, Brazil and Argentina.

We had spent more than a year preparing our Sprinter for this journey.

When we bought the vehicle in 2015, it had already been converted to an overland vehicle − with amenities that included a kitchen with a gas stove, a sink, a fridge, a shower cabin with a Thetford toilet, a 100-litre fresh-water tank, and a 40-litre tank for grey water.

The cabin, which is very comfortable, has beds for three people, a table with 3 rotatable seats and dimmable LED lights.

As we’d had some experience of using a solar-panel system on our Toyota Land Cruiser 78 in South Africa, we decided also to equip the Sprinter with an 180W solar panel system, a Votronic inverter, and an automatic booster for the two auxiliary batteries and the starter battery. Using the Votronic information panel, we can, at any time, monitor the batteries, the water tanks, and the charging process via either the solar panels, or 220V from an external power source. As it turned out, during the entire South American trip of more than 26 000km in six months, we were totally independent of any external power source.

The suspension was upgraded with an air-suspension system and onboard compressor from the Netherlands-based company VB.

We also fitted airline rails on the driver’s side to attach recovery tracks and a jerry can from Front Runner. 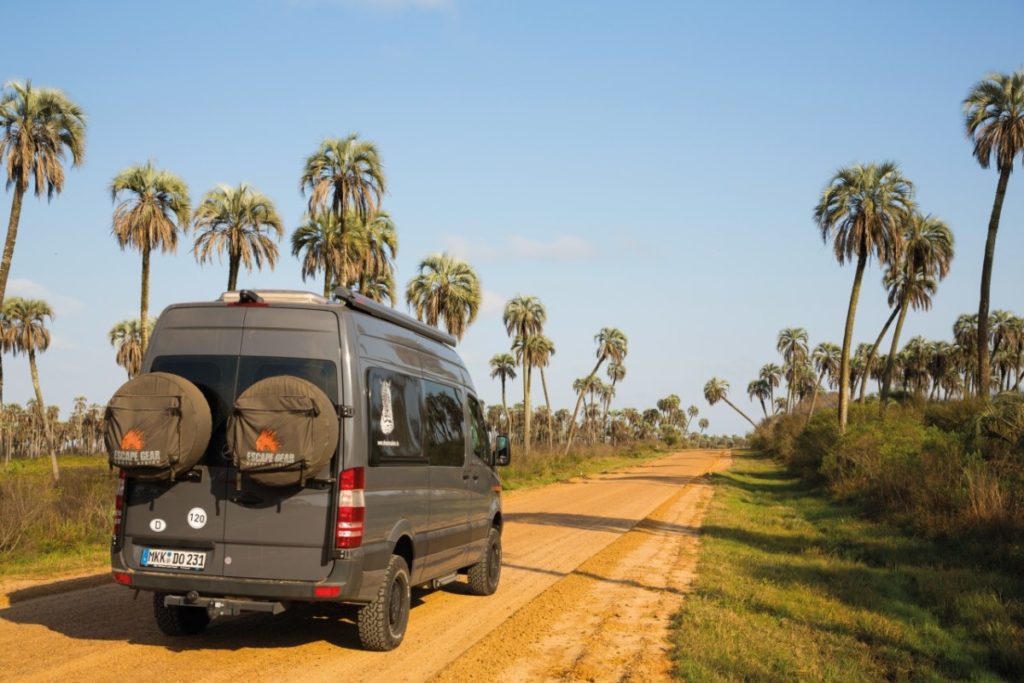 One of the most important alterations was replacing the original 18-inch rims and General Grabber 255/60 R18 tyres, with 16-inch steel rims and BF-Goodrich All Terrain T/A KO2  245/75 R16 tyres. Two spare-wheel carriers with spare wheels were also fitted to the rear doors.

Our BF-Goodrich KO2 tyre was miraculously still intact after the incident in Chile, and could be re-mounted after some panel-beating of the rim in a tiny workshop in San Pedro de Atacama by some local “experts” with a hammer.

However, during our preparations, we had two major concerns. How would the Mercedes Benz Sprinter with its Euro 6 engine specification and AdBlue emissions system perform at high altitude? And would the engine tolerate the poor-quality diesel in Peru and Bolivia?

We had learned (from various internet blogs written by other travellers to this part of the world) that vehicles with Euro 6 engines, AdBlue, and equipped with a Diesel Particle Filter (DPF) would encounter problems at high altitudes above 3000m.

As we wanted to avoid any issues and potentially dangerous situations (such as having the vehicle switch to limp mode far away from any workshop), we decided to take action. The DPF was taken out of the system, and the electronic control system (ECS) was re-programmed to simulate a Euro 4 engine program. On our return to Europe, the electronic control system of the engine would be re-set.

We booked a flight to Buenos Aires in Argentina for late August 2018. After our arrival, we took a ferry to Montevideo across the Rio de la Plata. The arrival of the ship with our vehicle on board was delayed for several days, so we had the pleasure of exploring the capital of Uruguay and enjoying the fare at some of its excellent restaurants. Still, a few days later, we were very pleased to see our Sprinter parked unharmed between some other overland vehicles in the harbour of Montevideo. The journey could begin!

Our first destination was the famous Iguaçu-Falls between Argentina and Brazil. They are very impressive even when compared to the Victoria Falls, and we spent some days in the area. 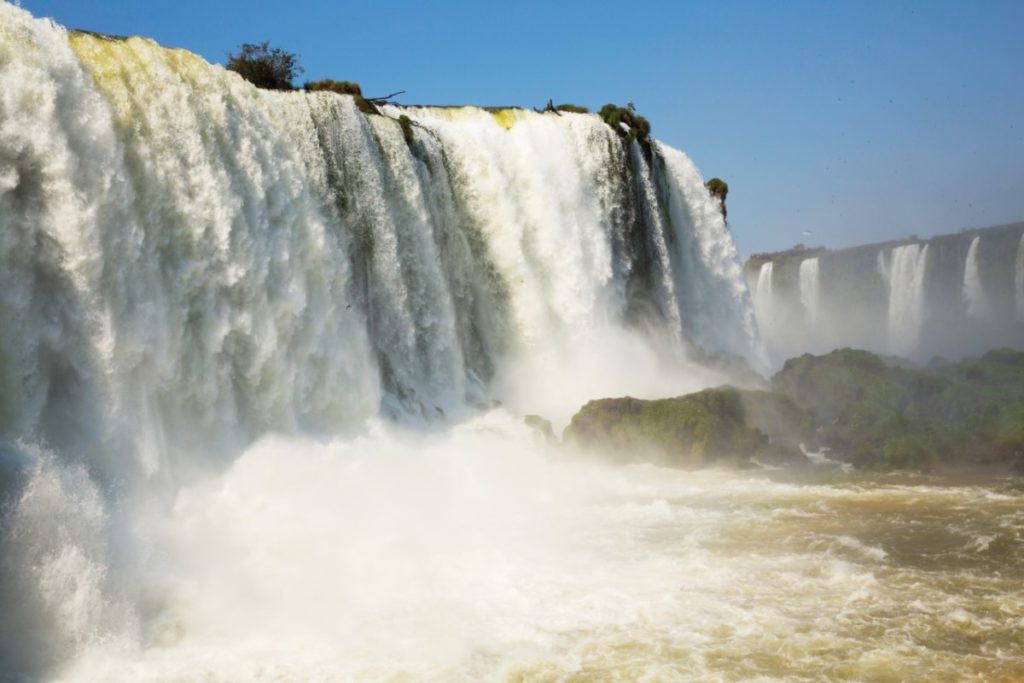 Since wildlife photography is our focus, we hit the road towards the Pantanal swamps in Brazil. Our goal was to see one of the most fascinating big cats endemic to this region – the jaguar!

Altogether, we spent almost a month in the Pantanal.  This huge swamp covers some 230 000 square kilometres in the Brazilian state of Mato Grosso, and extends into some parts of Bolivia and Paraguay. That is about 12 times the size of the Kruger National Park (19 485km2).

It was very exciting to drive the Sprinter over 122 rickety wooden bridges along the 147km Transpantaneira Road from Poconé to Porto Jofre. We left the Sprinter here for 10 days, and headed for the SouthWild Lodge, the stepping-off point for our jaguar search. 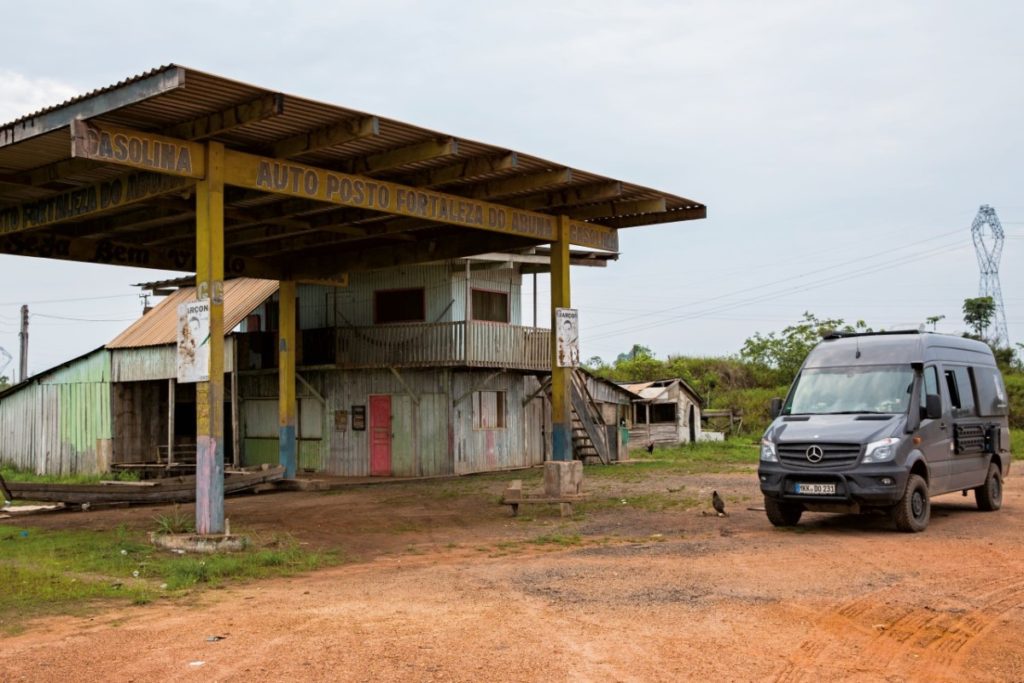 Wild camping at a filling station in Brazil.

We had booked this part of the journey in advance with Reef and Rainforest Tours in the UK, as local knowledge was vital for our quest.  From Porto Jofre, our guides took us in a speedboat along the Cuiabá River into the Three Brothers River, where we stayed for some days at the SouthWild Jaguar Retreat, a former fishing camp. Every day we went searching for jaguars, using small boats along the riverbanks in the soaring heat − over 40°C.

Capybaras (the world’s largest rodents) and caymans are the most important prey of jaguars. Jaguars behave more or less like big cats in Africa, and in some areas of the Pantanal, they are just as used to boats and their human cargo as lions are to game-drive vehicles in Africa. So, as well as some great sightings of jaguars and phenomenal opportunities for fantastic bird-photography, we also managed to capture some exciting video footage of mating jaguars. 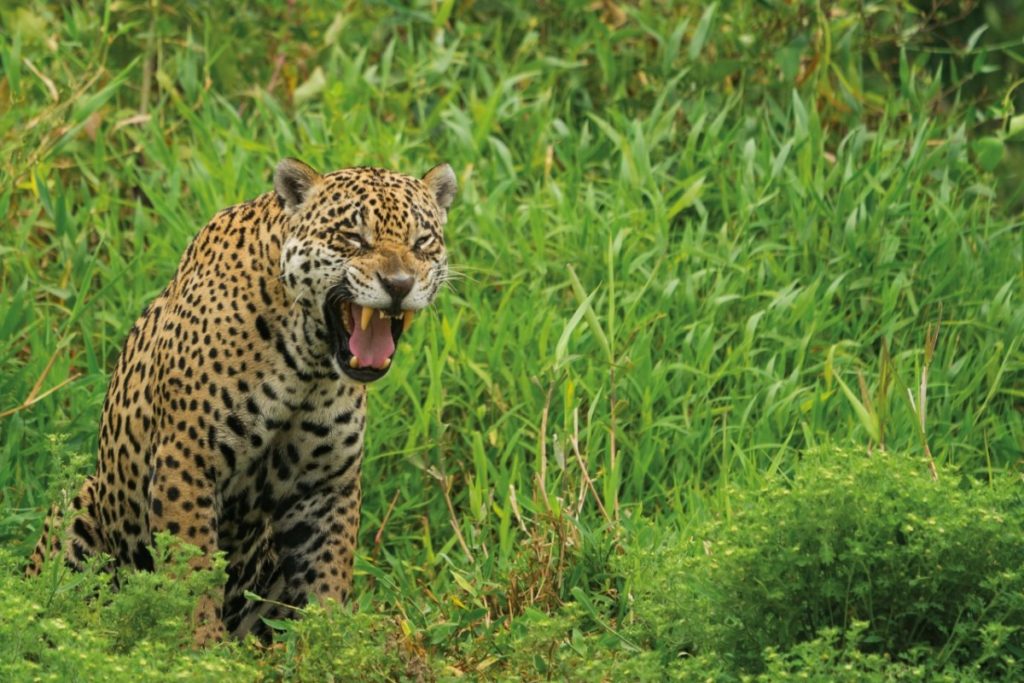 Deforestation in Brazil and Peru

Brazil is a massive country, and the driving distance north from Cuiabá to Porto Velho and the Amazon area is huge − by any overlanding standard. For days, we crossed endless soya and cotton fields, and saw the continuous destruction of the natural jungle vegetation on an unbelievable scale.

When travelling in Zambia and Tanzania, we were always shocked by how the local people were destroying their habitat in order to produce charcoal to supply the cities with fuel for cooking. However, what we saw in Brazil was even worse. Areas as large as provinces in southern Africa have been laid bare, with smouldering fires and widespread smoke a constant theme.

We arrived at the Rio Madeira one evening, in pouring rain. We had to cross over by ferry, but some trucks with technical problems had blocked the road to the ferry landing. It was chaos on a grand scale; and, with all the trucks around us, we didn’t know how to handle the situation. Nobody spoke English and our Portuguese is very basic – just good enough for ordering a beer and some caipirinhas.

After some hours, we decided to stay the night wedged between all these trucks, and had actually begun to prepare dinner when the trucks suddenly started moving. It was like a miracle. As if following some giant signal, we all started our engines and moved towards the ferry.

Once on the other side, we followed a road through dense jungle for about an hour, finding no place to pull off and park the vehicle. We eventually spent the rest of the night at a former filling station which had clearly been abandoned a long time back, and which looked like a spooky set from a C-movie. This was another lesson learned: night driving is not advisable when you may have to face unknown situations or strange people.

The border-crossing from Brazil to Peru was easy and straightforward on the Brazilian side, although we took forever at the border post to Peru. All details of the vehicle were entered into big ledgers, and we had to buy third-party vehicle insurance for Peru. Before starting the trip, we had bought insurance for all the other countries from an agency in Buenos Aires. 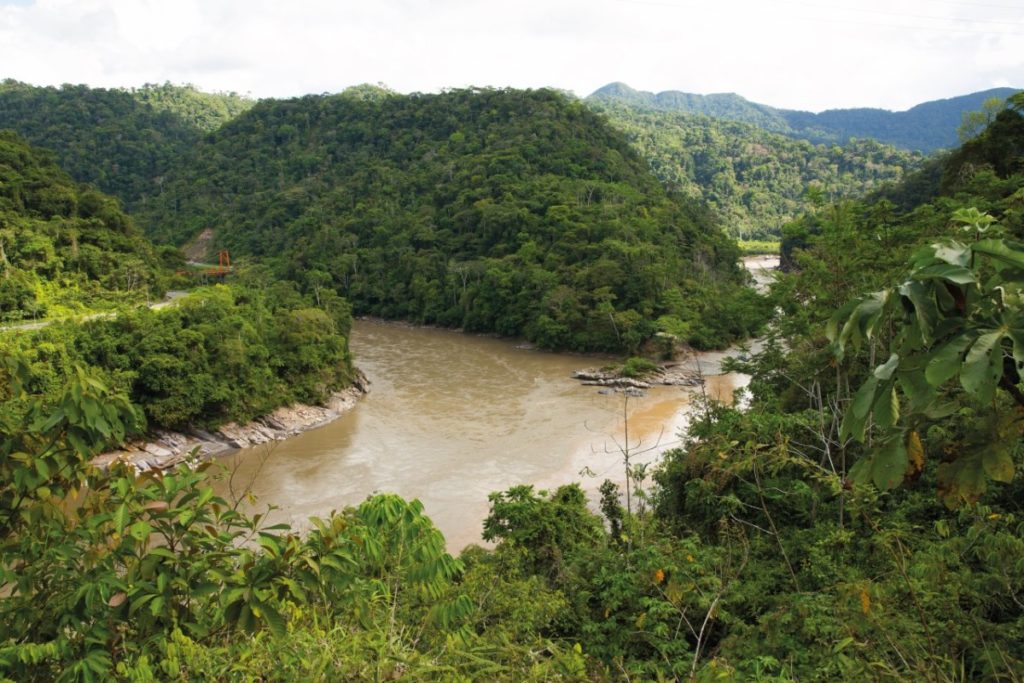 The road to Peru leads through dense Amazon rainforest.

From the border, we drove through lush green jungle landscapes, with evidence of some subsistence farming along the road. We felt completely safe when parking our Sprinter in small villages for the night. Unlike some places in Africa, nobody came to eye us, nor were they interested in our vehicle. Local people in general were very laid back, and not as curious as they are in other parts of the world.

Crossing the Andes: rainforest to desert

We spent two nights at the Wasai Lodge at Puerto Maldonado, which had a beautiful view over the Rio Madre de Dios. We then spent some days in the Tambopata National Reserve, one of the most biodiverse places on the planet, and a jewel of true Amazon rainforest.

For the rest of Part 1, grab a copy of the May issue of SA4x4 Magazine. If you already have, keep your eyes peeled for Part 2 – Patagonia to Tierra del Fuego!