If you’re not chasing the best roads in South Africa, you’re simply not doing it right. By roads, of course, I mean dusty mountain passes with spectacular views. As travellers and overlanders, we live for the langpad, and the Eastern Cape Highlands has long, winding roads in abundance.

On my way back to the Cape from a recent Wild Coast expedition, I couldn’t help but sample the region famed for the ‘Ben 10’ passes – a collection of mountain routes that traverse the highest roads in South Africa. Among them is Makhollo, AKA Ben MacDhui, which, at 3 001m, is the highest driveable road in the country, dwarfing the far more famous Sani Pass.

I had just fitted a brand new RSI SMARTCANOPY and SMARTKITCHEN to our Isuzu long-termer, so it was only fair that I got a chance to test it all out over the course of a few days. Departing Pietermaritzburg, we headed southward, and also upward, towards the jagged outline of the southern Drakensberg, first through Kokstad and then on to Maclear, where our mini-journey truly began.

With a rapid rise in elevation came a sharp drop in temperature, a far cry from the tropical pleasures we had just been enjoying in Pondoland. With limited time in the Highlands, our goal was simply to climb Naude’s Nek and visit Rhodes and Tiffindell Ski Resort. En route, we took a much-needed rest break in Maclear, a bustling town at the very foot of the ‘Berg.

Eager to test out the new kit, we checked in to Caravan Park Tortoni, a quiet and exceptionally well-manicured campsite just outside of the town. We arrived late, having spent several hours dodging cattle and foot traffic, so we quickly got cracking on supper.

Each of Tortoni’s campsites is serviced by a towering spotlight, a tap, and a communal ablution block that relies on a glorious old donkey boiler, fuelled by wood scraps and mielie cob firelighters. At R200 for the night it was a steal, and a properly quiet place to recharge before tackling Naude’s Nek.

After pitching our tents, the cold began to bite, though it wasn’t long until we had a toasty fire burning at our campsite. We weren’t properly prepared for the cold, but real disaster struck when the campsite manager rocked up in a panic and got us to put the fire out. As it turns out, a local bylaw makes open fires illegal during the winter months, as there’s a huge danger of wildfires spreading through the region’s extensive pine plantations. Straight to bed, then, with as many blankets and layers as we could gather.

Beauty at its peak

The gravel road connecting Maclear and Rhodes is widely known as one of our country’s most beautiful climbs, culminating in a twisting ascent up Naude’s Nek, famed, albeit incorrectly, for being South Africa’s highest dirt road. In reality, it places fourth after the nearby Ben MacDhui Pass, the Tenahead-Tiffindel road, and the more famous Sani Pass. 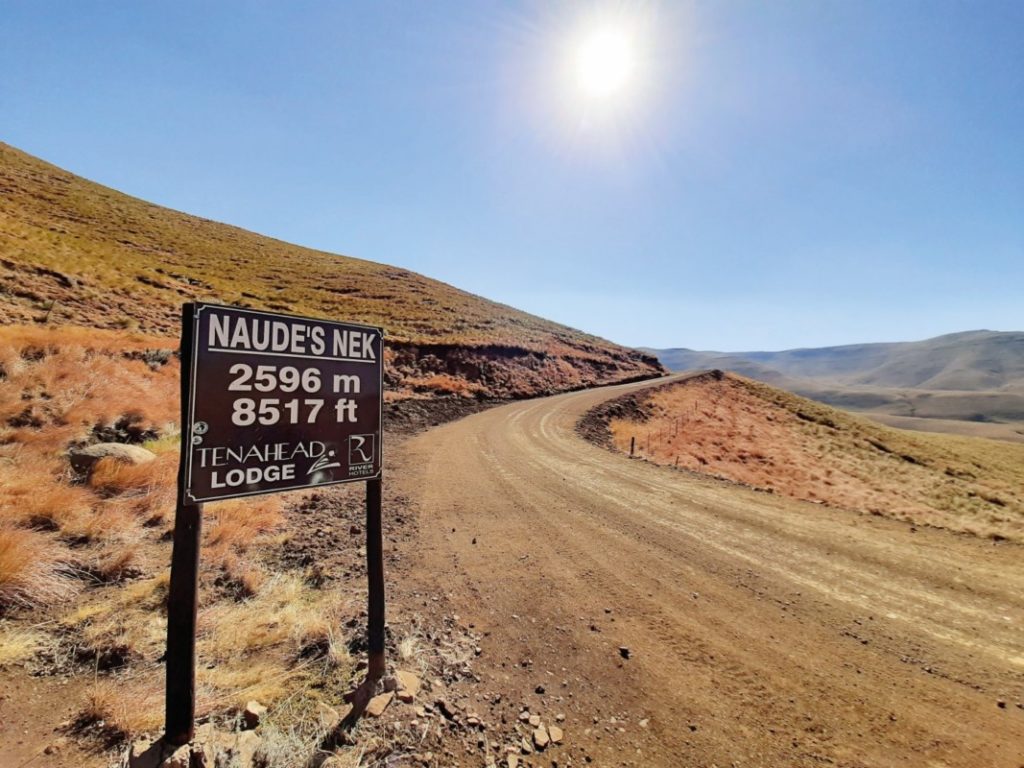 Named for the pioneering brothers who carved the road along an old animal trail, the pass itself is a switchback-laden zig-zag through Drakensberg foothills and snow-laden peaks. In winter, the road can pose a real danger to four-wheeled travellers, with snow and black ice lining the bends. We encountered some ice, but the only genuine threat when the roads are clear are sharp stones and rockfalls. 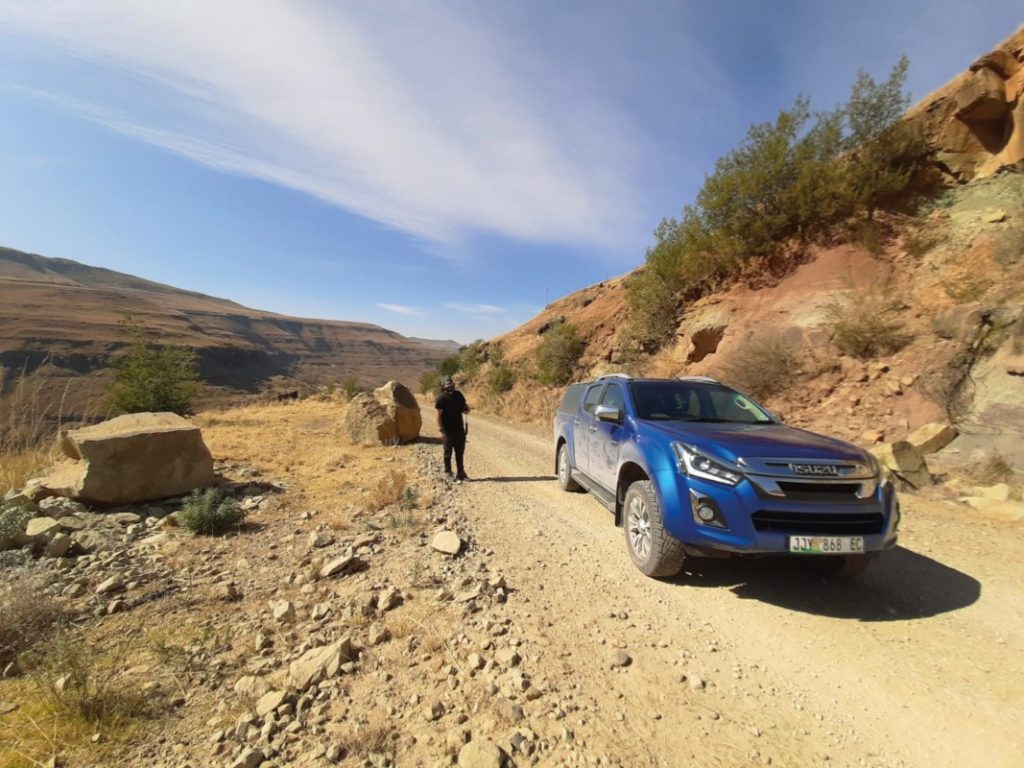 At the top of the pass, there is a signboard indicating a height of 2 500m above sea level, but the winds were so strong during our visit that we couldn’t brave more than a couple of minutes outside the bakkie. A real pity, considering how jaw-droppingly stunning the views are from the top. Near the top, you have the option of heading off towards Tenahead Lodge & Spa and Tiffindell, but unless you have a booking at either, you might want to avoid trespassing. 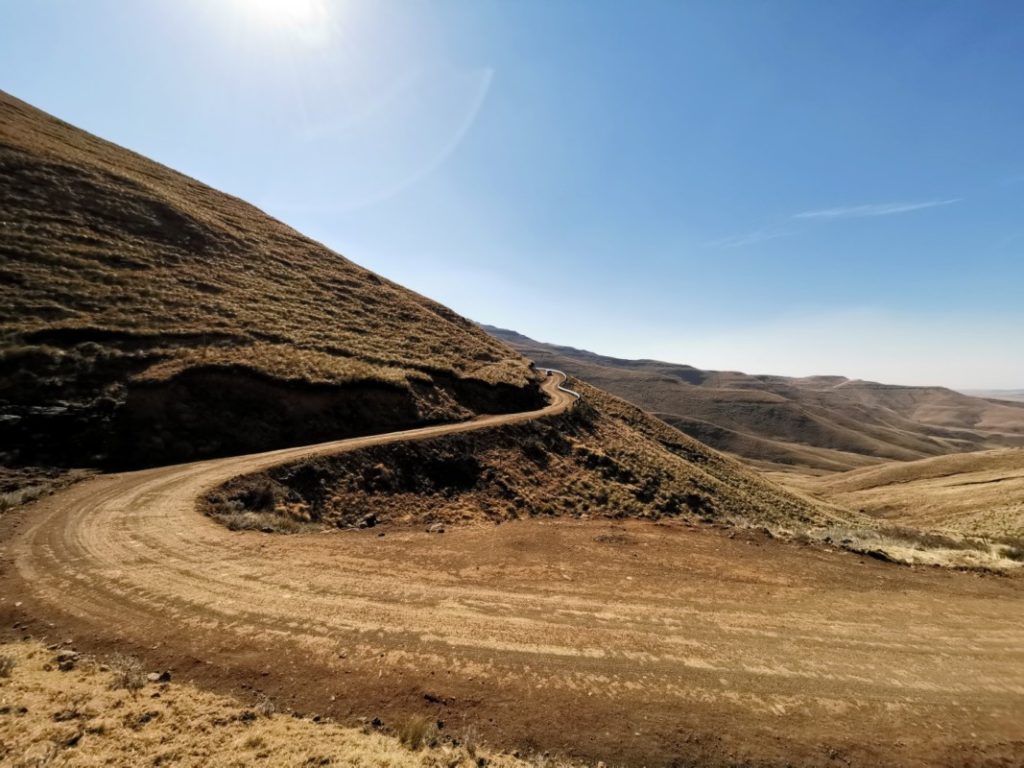 If you continue towards Rhodes, as we did, you’ll pass a picnic spot alongside a monument to the Naudé family, commemorating their efforts in developing access to the region. This spot signifies a return to civilisation, with Rhodes just a few bends away.

Rhodes is a village somewhat off the radar, favoured primarily by an oddball mix of motorcyclists, mountain bikers and trail runners. Even so, the local hospitality industry is significant, with several restaurants and a plethora of Airbnb options peppering the dozen or so streets. 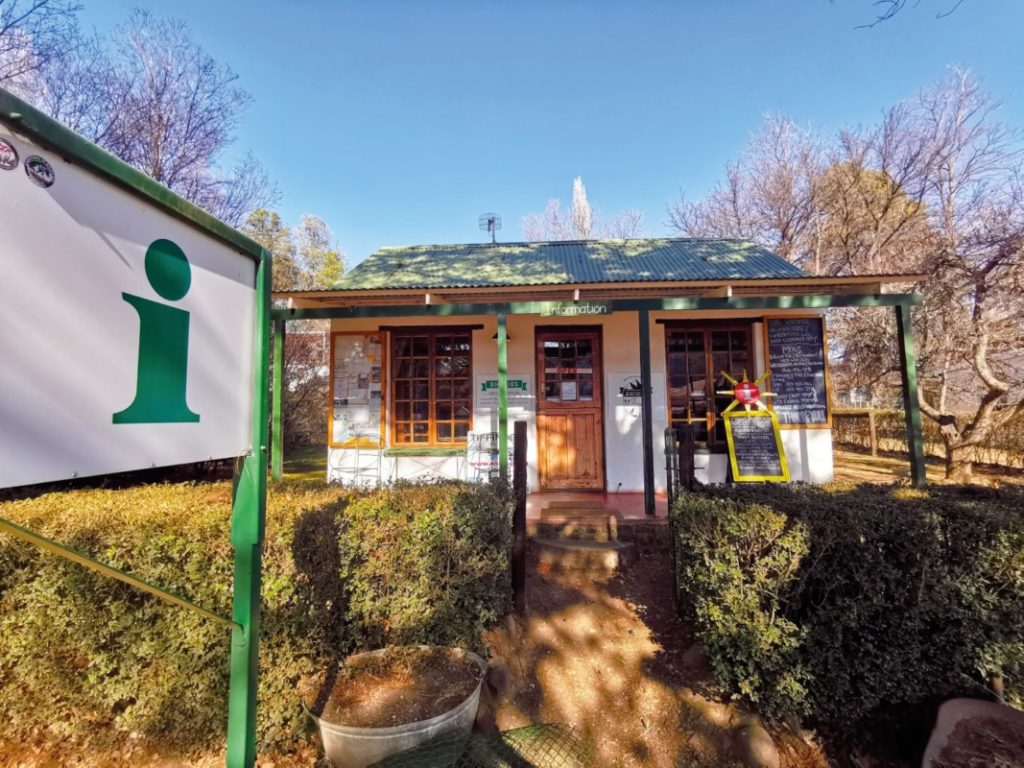 Some locals will have you believe that the village has a permanent population of just 28 retirees, farmers and business owners, but that neglects to take into account the lively community that has sprung up just a hundred metres or so from the hamlet’s border. Speaking of borders, Rhodes is in fact the only village in South Africa that is considered a national monument in its entirety, from end to end. 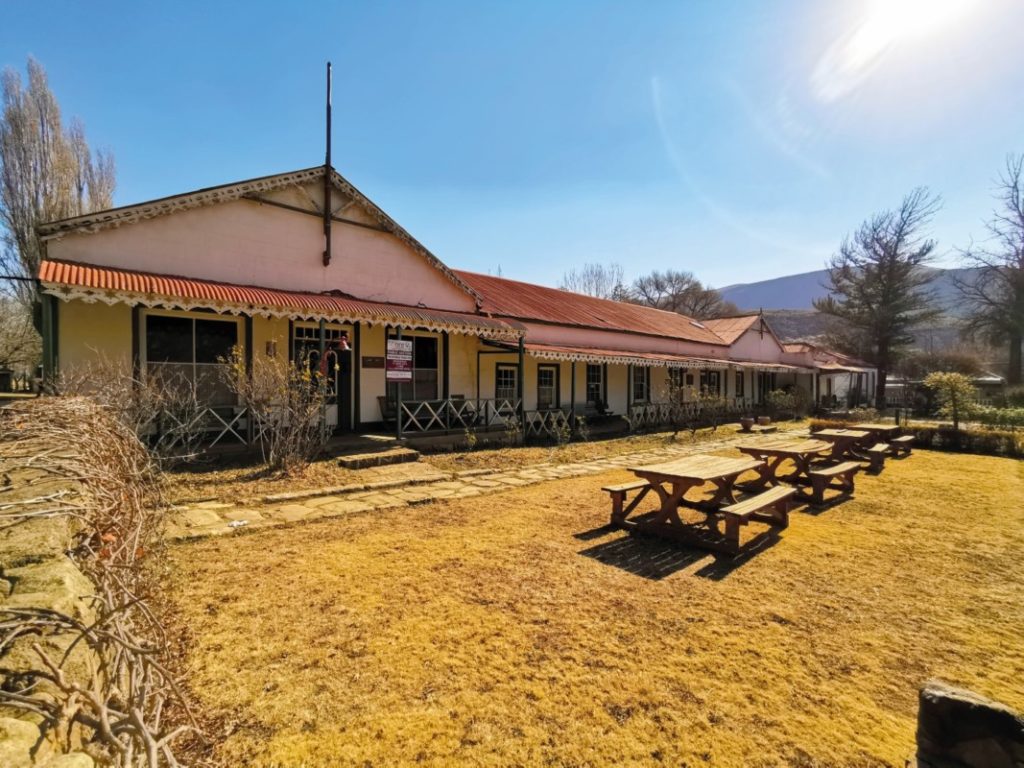 The village itself is a living monument to times gone by, with colonial architecture dominating the scenery. Low on diesel, and aware that the nearest garage may have been quite a drive away in Barkly East, we asked around and got steered in the direction of Sean du Plessis, a retiree and part-time woodworker who has transformed a barren field next door to his home into a beautiful park, open to all who need some room to play or a quiet place to relax. 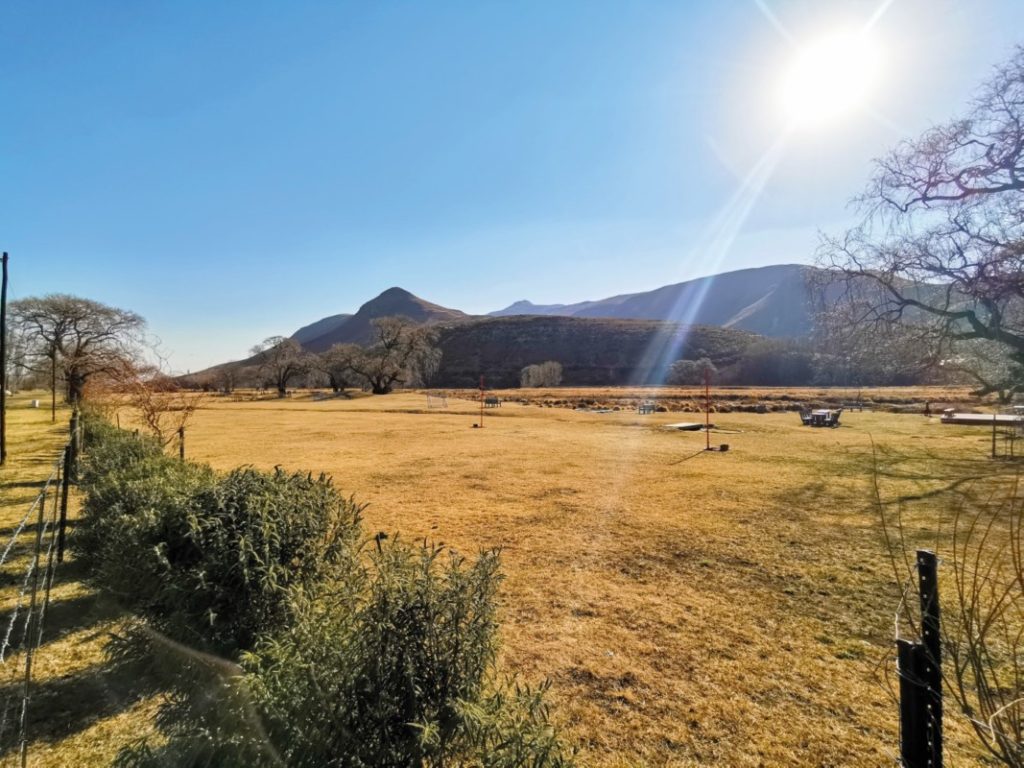 Sean funds the upkeep of the park by adding R4 onto the price of every litre of fuel he sells – a fair trade, if you ask me. He sorted us out with 15 litres, giving us the range to tackle the climb to Tiffindell before sunset.

We, too, needed to refuel, and found ourselves some good food at Walkerbouts Inn, a local pub and guesthouse run by Dave Walker. The inn’s walls are lined with pictures of its many visitors, giving you a brief glimpse into the kind of people that frequent the sleepy village. We tucked into some of his ‘world famous’ pizza, and then ducked off to tackle our next pass…

For the rest of the adventure, grab a copy of the November issue of SA4x4 Magazine.