One of the big worries, when on an extended overlanding trip through Africa, is the condition of the fuel that one might fill up with along the way. However, this shouldn’t be something that gives you sleepless nights.

Travellers will know that in remote areas you don’t always find normal filling stations, and when the fuel you brought with from home runs out, often the next resort is to buy locally available fuel along the way. There are never any guarantees about the quality of this fuel – it isn’t always clean or pure, and is often contaminated by water and sediment.

Water and dirt are common in fuel when it is stored in cans and drums (including your own jerrycans). These contaminants block fuel filters, corrode components and can cause severe damage to engines and fuel injection systems.

A fuel filter funnel serves as the best first line of defence. The RFF Series from Racor is a heavy-duty, easy-flowing, filter-in-a-funnel that separates free water from liquid fuels, removes dirt above 50 micron and allows you to visually inspect the quality of your fuel supply as you refuel. 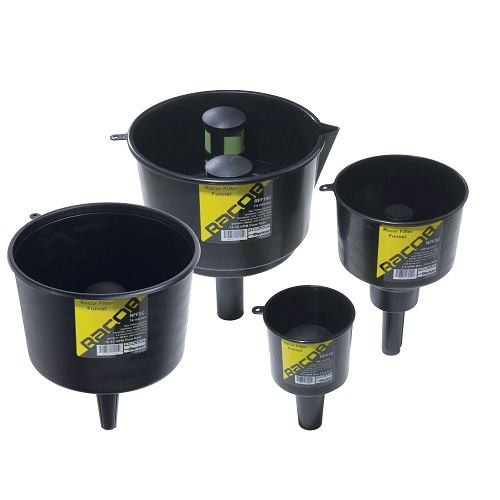 The mechanism is simple and robust. Racor RFF funnels are made from an electro-conductive plastic material and feature a permanent built-in Teflon-coated 50 micron stainless steel screen filter. The filter repels unsuspended water, as well as filters out sediment and dirt particles down to 50 micron. These collect in the sump at the bottom of the funnel, and can then be disposed of safely before fuelling is resumed.

Four different size funnels are available, from the Small (flow rate 10-litres/minute), which costs R455 and is ideal for most overlanding uses, right up to the trucker-friendly Extra-large, with a flow rate of 55-litres/min.

According to Racor, it is important to note that while their filters can dry and filter virtually any hydrocarbon-based fuel (including petrol, diesel, paraffin, avgas and jet A1 fuel), it is best to have one funnel for each type of fuel. Using the same filter for both petrol and diesel appears to shorten the life of the Teflon coating on the filter screen.

It is worth knowing that any hydrocarbon-based fuel, which has been contaminated with another fuel, cannot be separated again with the use of either a Racor funnel or filter, or any other filter. 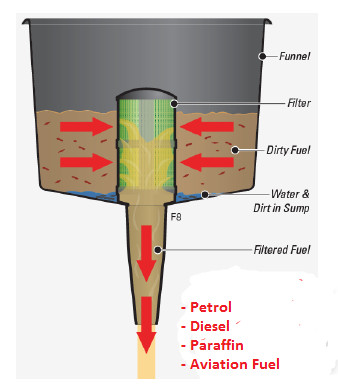 For example, if paraffin has been mixed with diesel it cannot be separated again by simply filtering it, as both are hydrocarbon fuels. If you suspect this is the case, avoid this fuel.

Another point to note is that while a decent fuel filtration system will improve the quality of the fuel, it will not improve the actual grade. A case in point is when only 500ppm diesel fuel is available; even after taking all possible filtration precautions (including cleaning and drying of the fuel), it will remain 500ppm.

However, clean and water-free (dry) 500ppm is better than nothing, and when used for short periods of time is really not that harmful to most common-rail diesel engines available in southern Africa. This includes the Ford Ranger/Mazda BT-50 2.2- and 3.2-litre engines, the new 2.4 and 2.8 GD-6 Hilux engines, and the V8 4.5-litre diesel on Land Cruisers.

Do not use chemicals or soap to clean out the funnel after use – this may cause damage to the element.

After use,safely dispose of the water and contaminants collected in the funnel and shake off by the spout. You can use a clean cloth to wipe the outer plastic brim of the funnel, if necessary, but preferably do not wipe off the actual filter screen.

After use, store in a closed plastic bag to prevent dust from settling on the filter screen.

To test the funnel, simply put about half a cup of water into about a litre of fuel and slowly pour through the funnel into a glass or plastic bottle. This water should not pass through the Teflon-coated filter screen.

A fuel filter funnel will cleanse fuel down to 50 microns. The next step against fuel contamination is to plumb a fixed Racor pre-filter kit into your vehicle’s fuel line, just before the OEM filter. This pre-filter will filter the fuel down to 10 microns and remove 98% of any suspended water in the fuel. Effectively it works to separate water, trap water and filter the fuel, all in one. 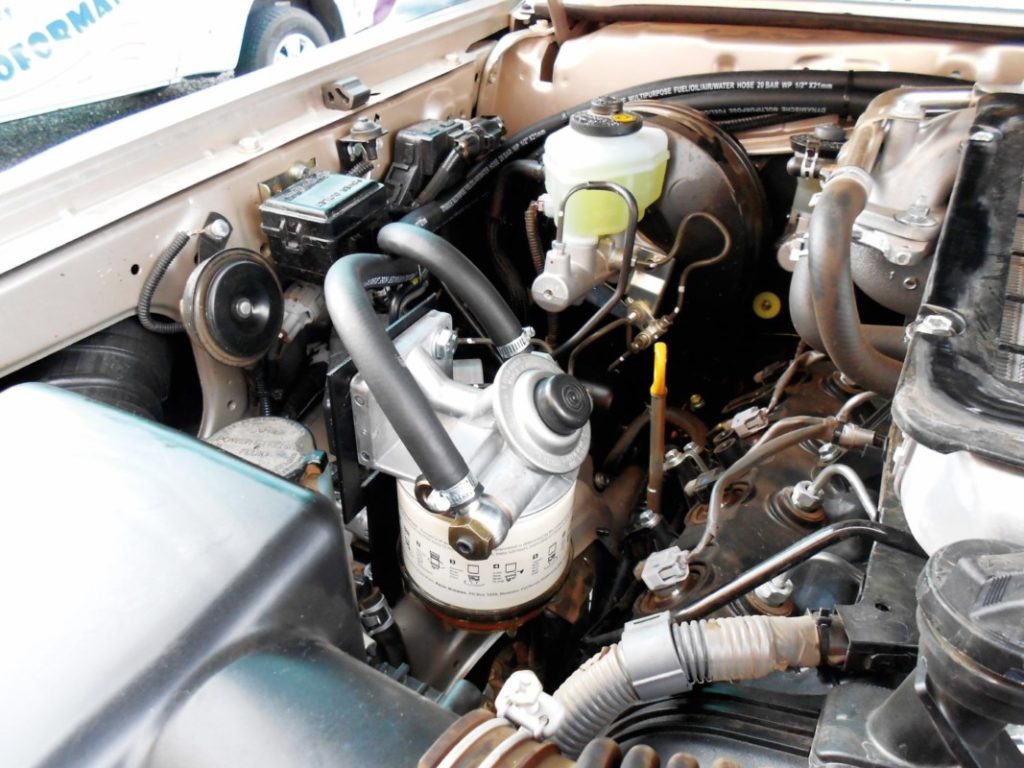 In most installations this in-line filter is fitted before the OEM fuel filter, which then does the final job of removing any further impurities down to 2-5 microns. The manufacturers prefer this type of installation.

Fitting a Racor fuel filter/water separator is both cost-effective and proven in the field, with a cost of R3 000-R4 500 depending on the vehicle. Kits include a complete filter, extra replacement element and mounting kit, and are available for a range of 4×4 vehicles, including Land Cruiser 70, 100 and 200 Series, Ford and Mazda diesels, Toyota D-4D and GD-6 engines, Volkswagen Amarok, Land Rovers and more.

For more information on Racor equipment, fill out the contact form below.