Adding a six-speed auto to Mahindra’s workhorse ups the game for this value proposition.

It’s hard to argue against a brand new, top-spec double cab with all the latest bells and whistles for the same price as a five-year-old Hilux with 100 000km on the clock. That’s precisely where Mahindra fits into the picture. This company, which now has 67 local dealers and an assembly facility in Durban, is pushing hard into the sub-Saharan market with a range of utility vehicles that offer extreme value. Surprisingly, at this price range, they are also producing high-quality products that are a joy to drive. We did a thorough test of the manual (S10) version of the Pik Up (SA4x4 November 2018) and it came away with a positive review. And now, this beast from the East is offered as the S11, with a six-speed Aisin-Warner automatic gearbox that’s not too far off the version fitted to Toyota’s Hilux, Fortuner, and Prado. The difference here is that the manual override lets you upshift as well as downshift – a huge benefit, especially in sand. 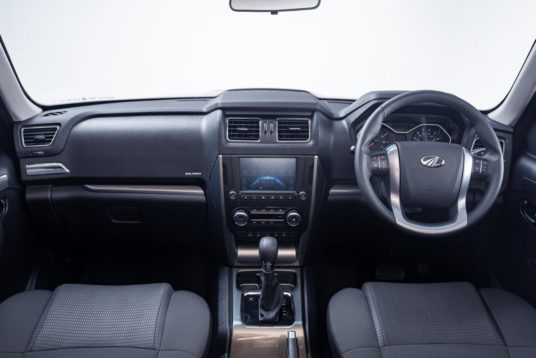 Under the bonnet is the same 103kW mHawk 2.2-litre four-cylinder diesel. Though far from quick, it’s a very tractable mill with minimal turbo lag and plenty of get-up-and-go for daily use across both long and short hauls.
What also won us over was the basic nature of the machine – it’s a true workhorse without trying too hard to be a luxury vehicle. The S11 is no different in these aspects but now offers a wider scope of audience thanks to its brilliant auto box – the automatic choice for well over 50% of bakkie buyers today. Linked with an Eaton Mechanical Locking Diff (MLD) rear differential, the auto box worked well on our rocky test route with the rear end locking up quickly over axle twisters without driver input.

Cosmetically, the S11 (auto) is near identical to the S10 (manual) version but does get minor exterior upgrades including a new grille, indicators integrated into the mirrors, modernised headlight clusters, and new fog lamps. The interior also gets a few significant upgrades, which bring the Mahindra’s feature set closer to some of its established and rather more expensive rivals. These include a new seven-inch touchscreen with standard sat-nav, auto climate control, and multi-function steering wheel with buttons for the cruise control, phone link, and audio. What’s more, the system links rapidly to a mobile phone, is easy to use, and works with precision. Other safety and comfort features that bring out the luxury in this workhorse include traction control (not previously fitted on the Pik Up), electric windows all round, auto-locking doors, two airbags up front, and 12V power outlets front and rear. 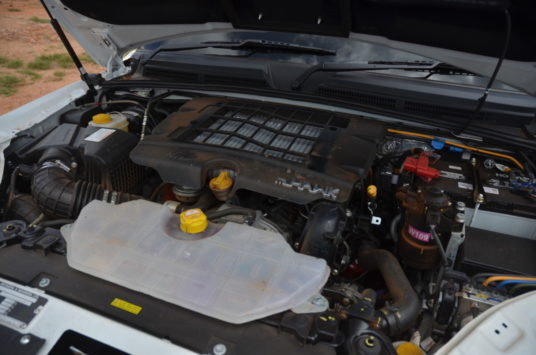 If any criticism is to be raised against the S11 it is that the ride is rather firm; a traditional bakkie trade-off that begs for some weight in the load bin, though it’s understandable given the load rating of 995kg. The S11 Pik Up is also rated to tow a braked trailer to a maximum of 2500kg. Another quibble is that the interior is mildly cramped on the driver’s right side, though the quality of materials and fit and finish in this department have been smartly stepped up. And while we approve of the fitment of the Eaton mechanically locking differential, which is foolproof and requires zero driver input, it can be harsh in operation. Eaton’s E-Locker, a push-button version with similarly robust mechanical components, would be a desirable option.

Karoo Special Edition
For those that want some added kit, Mahindra has the Karoo Edition on offer, first introduced in 2018 when it opened the KZN assembly facility, and now available in both 2×4 and 4×4 double cab variants, and across the range of S6, S10, and S11 derivatives. On the latter range-topper, an extra R15k gifts the buyer those distinctive Karoo decals, a set of bling alloys, better tyres, a black cosmetic package with side steps, and a black nudge bar, plus the functional addition of a rubberised load bay and custom lockable roller deck to keep goods secure.